Step into that time machine and let us party like it is 2010!

It feels somewhat weird to be reviewing a game that is in fact only roughly 4.5 years old. Not because Bayonetta is a bad game or anything, but rather it doesn't feel that long ago that I played it. It is one of those titles that made me happy to have a Xbox 360 in the household, and I played through it multiple times as a result. But now that Bayonetta 2 is almost upon us, I went and played it once last time. The big difference? I played it on the Wii U and that experience was nothing more than a memory refresher. 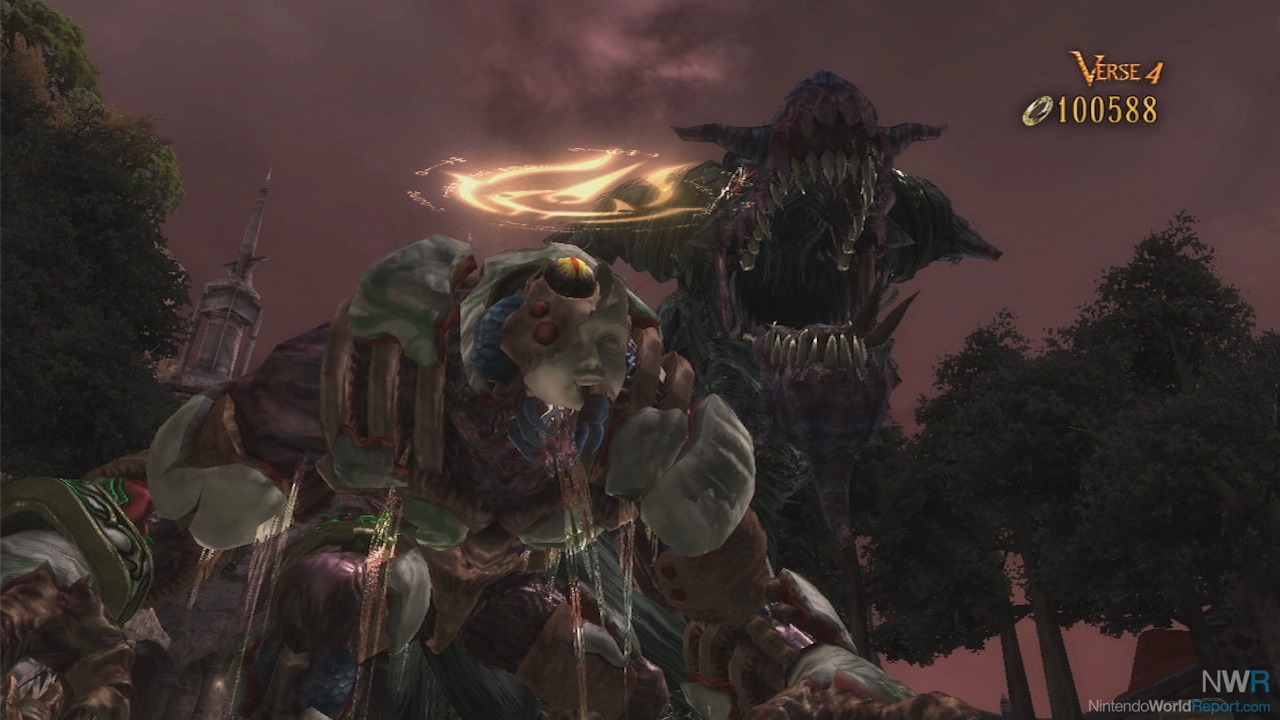 The original Bayonetta is still a glorious action game and time has not really changed that one bit. That is mostly because there has not been anything like it and a game like Bayonetta filled that void perfectly. In returning to it, I realized how relentless this game can actually be, even compared to its upcoming follow up. You will fight those various angelic troops with all of your might and the slightest error can be extremely fatal. The many, many QTEs are a good case in point as failing them means a brutal loss of your life.

The original Bayonetta was a non-stop action climax game that was also really rough in judging you as it came to using items. Also even on the lowest difficulty, if you screwed up combos, no high scores for you. These fancy scores, of course, will be exchanged into medals per section of a chapter. All these medals put together form one final chapter rank and these range from Pure Platinum to Stone. This is a means to keep pushing yourself and to constantly come back again and again to improve.

Improving is the key word in Bayonetta. You will learn while you play and by the end, you are expected to wield this game properly in order to advance. This game won't be for everyone, but luckily, they are tools to make this goal approachable and really fun. Dodging at the brink of being hit will activate Witch Time for example, which allows you to beat down enemies quicker for a couple seconds. There are also various weapons to choose from, so that you can use the combos that you find the most effective. Once in a while, you will also be able to catch a breath as you will able to activate Climax and Torture attacks to nail down opponents in one glorious showcase. 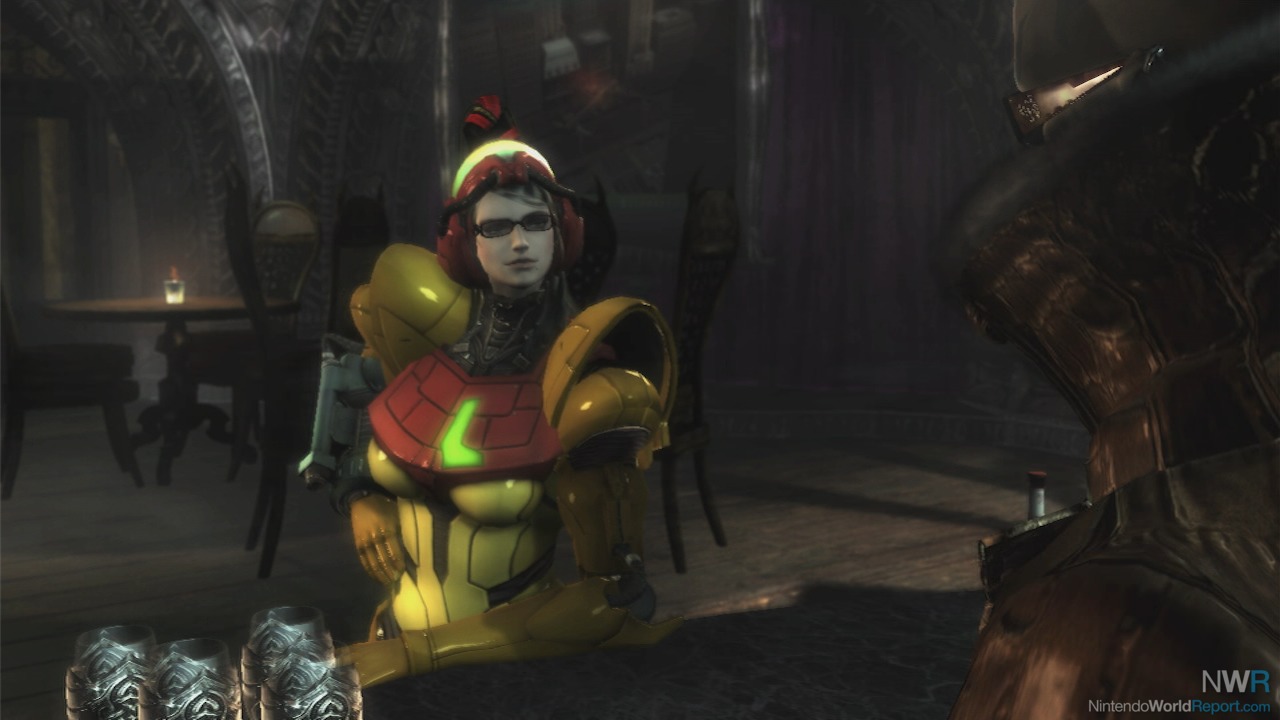 The story is another selling point of the title and it is a needed part of history if you want to everything for Bayonetta 2. It tells the tale of a witch that didn't know for 500 years who she was and goes a quest to find out. It brings Bayonetta to Vigrid, a city which contains environments heavily inspired by European architecture. On her way, she meets various characters including Jeanne, a fellow witch. This other witch seems to have some significance to Bayonetta's past, but she keeps herself awfully in the dark. The game is filled with to the point humor, which now and again creates agonizing situations. It is overly bold and crazy outrageous and goes so far as wearing it proudly on it’s sleeve.

Another thing that was truly agonizing were the touchscreen controls of the Wii U GamePad. Here, you aim with the stylus at the locations you want to go and attack with simple taps. It just feel really unnatural as the Bayonetta feels made for physical input. In that regard, you can do so with the Wii U GamePad, the Wii U Pro Controller as well as the Classic Controller. I mostly went with the GamePad as it just felt comfy for my big hands to play the game with it.

The presentation is not exactly the greatest. There are some framerate drops spread across your adventures and some textures could have used more work. My best description of them would be fuzzy. The overall look and atmosphere still shines through, however, and it performs at least better than the ill fated PlayStation 3 release. The audio presentation is also still well done and a smile appeared when ''Fly Me to The Moon'' blasted through my television's speakers. With a nice variety in soundtrack and lovely sound effects, the audio mixing did not need any altering. 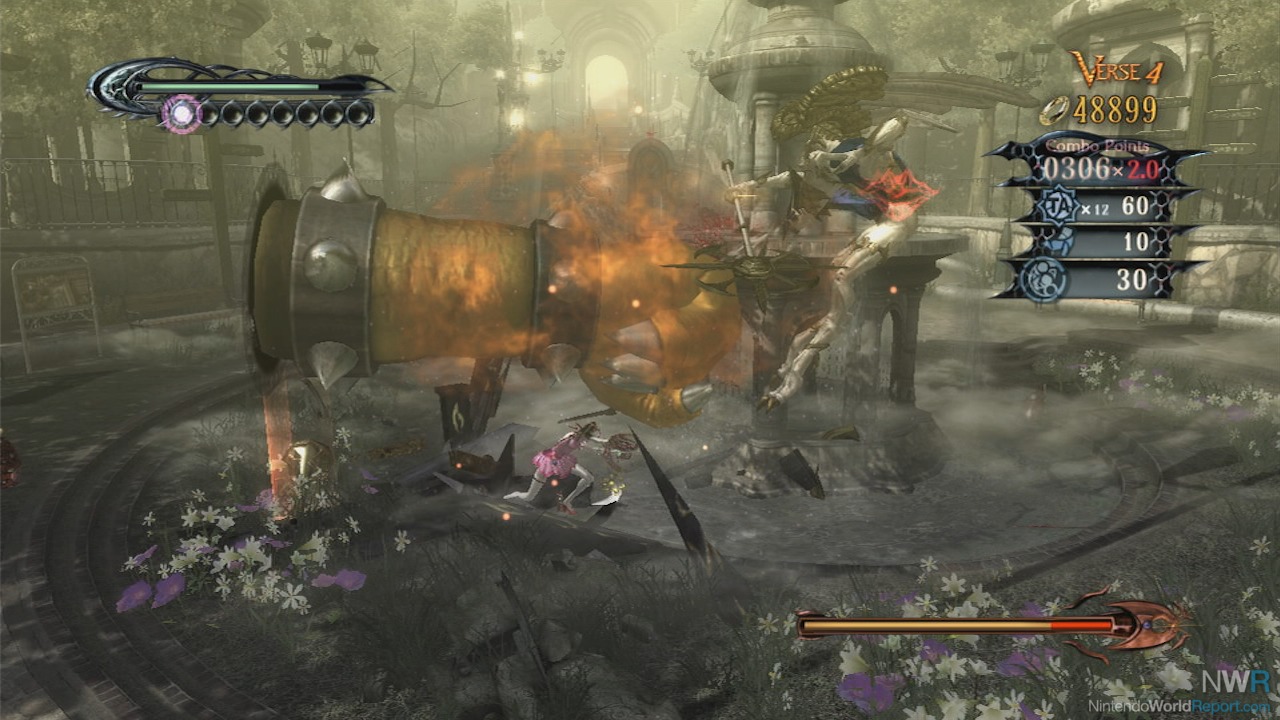 What did get altered though is that you have some nifty Nintendo costumes right from the start. Bayonetta will be to cosplay as Samus, Peach, Daisy and Link, and these are glorious in their own right. Seeing the Bayonetta 1 version of the witch being transformed into these beloved characters is not only funny, but they have some uses too. The Samus suit has the visor, which you can constantly put on Bayonetta's face. It is a fun and random to activate during cutscenes. Next to this, you can use the suit's arm cannon to shoot down enemies instead of her regular pistols. Peach and Daisy are different in that regards as you will be using Bowser's limbs to attack your enemies. Finally, there is Link, with which you can access a special Hylian shield to guide you in battle. It are all kind of wacky ideas thrown into an existing game, but they are fun to toy around with for a little while.

The original Bayonetta remains the crazy, unique action title from a few years ago. There are newly added controls and some Nintendo related costumes, but the same content is still here in full force. That in turn makes the presentation somewhat dated and there are framerate drops throughout the game. Also the game can be relentless when it wants to be and outrageous when the plot allows it to. That chaos will not serve all players well, but those who stick with it will have a brilliant time.