Despite being an excellent platformer on its own terms, Wario Land 4 may leave fans of the series disappointed. Read Jonny’s review to find out why.

Most of you probably know that Wario started out as the villain in Super Mario Land 2 for Game Boy. He then got the starring role in Super Mario Land 3, which is also sometimes called Wario Land. It was an interesting game in that you controlled a “villain” whose only motivation was pure greed…the game was one giant treasure hunt. Wario Land 2 followed, and this time the game’s development team outdid themselves with a totally new style of gameplay that would come to forever define the character and his games. The level design was sheer genius, and perfectly integrated with that was the new “no-death” gameplay. Most enemies would simply make you lose coins upon contact, but a few (and here’s the really innovative part) would actually transform you. For instance, a fire enemy can set you on fire, which can be annoying and can also let you break special blocks. Most of the transformations were like that; they could be either a nuisance or a necessity, depending on the situation. And since there was no danger of dying, you were basically encouraged to run into every new enemy and see what happened. Wario Land 3 refined that system infinitely, with most of the special moves being locked at first. Thus, earlier stages could be revisited later on, and your super-duper butt smash could break a block that was always impenetrable before. WL3 also tied all this together with a very slick overworld map and arguably the best Game Boy Color graphics of all time.

Why have I given you all this history? Because it’s important if you want to understand how Wario Land 4 can be so well executed and yet so desperately pointless. The game manages to leave behind some of the best aspects of the series, bring in new ones that don’t work very well, and leave others that should have been updated. By taking away Wario’s invincibility and the interweaving levels, the game loses much of its charming sense of exploration. The overworld’s untimely demise and the addition of an “escape” time limit effectively kill the franchise’s beloved, leisurely pace. And yet, the game’s core mechanics are so blatantly re-used that veteran fans of the series will be left wanting much, much more.

If I’m still not making myself clear, let’s use a simple comparison. Look at the first four console Mario games released in America. Every single one of them is vastly different, a wholly separate experience with its own set of moves, features, goals, and characters. Now look at Wario’s four handheld titles. Yes, the second one was an incredible leap from its predecessor, but where has the series gone since then? Number three was perhaps passable since it was developed in such a short time frame, and on the very limited GBC hardware, but there are no excuses for Wario Land 4. If I sound bitter, it’s because I love this character and his series so much. Right now Wario is stuck in the game design doldrums, and he needs a serious vacation.

That’s not to overlook WL4’s accomplishments. The game’s graphics are lush and colorful, with plenty of gratuitous scaling and rotation effects. The music is mostly very good, and many songs have voiced lyrics…incomprehensible voiced lyrics, but impressive nonetheless. The control is simple and tight, as you’d expect in a Nintendo game. Gameplay is still essentially a very long string of nonlinear platforming puzzles…it’s hard to explain if you haven’t played a Wario game before. Suffice it to say that you learn to put your stunned enemies to very good use.

I’m not trying to dissuade you from buying this game. It is easily one of the best platformers available so far on GBA, and as usual, the level design alone is practically worth the game’s price. Those gamers who haven’t already played the other Wario games to death will find this one to be a perfectly satisfying, deeply engrossing experience. Heck, maybe even hardcore Wario fans will dig the slight changes and the whole new set of levels, but it’s just not enough for me, and I know I can’t be the only one who feels this way. Wario Land 4 is a disappointment only because it lacks true innovation when it comes from the gaming company known for, above all else, innovation.

Wario Land 4 is nothing special stylistically, but the sprites are drawn well and the colors are very vibrant. Most stages have several layers of parallax scrolling, and there is plenty of sprite scaling and rotation, however superfluous.

There are several very catchy songs and a few more very bizarre, but fun, J-pop-style tunes. The hidden CDs, however, amount to the type of stuff you can create on the old GB Camera. Why they don’t play the normal game songs is beyond me, but it’s a shame.

The new running move is easy to use and quite handy for those level escapes. Everything else is ported directly from the old games and still works just as well.

I’m torn on this score. Wario Land 4 features some of the finest 2D level design ever. On the other hand, the gameplay is almost completely rehashed. The few new additions, like the level escapes, add little to the experience and could have easily been left out. Still, if you haven’t already gotten your fill with the previous games, I can’t really fault WL4’s gameplay; there’s nothing fundamentally wrong with it.

This is a moderately long game, with about twenty total levels. Each one has quite a few secret puzzle rooms and a hidden CD than tends to be quite hard to reach, so there’s a lot to do for players who like to be thorough with their platformers. I suppose I could complain that there’s no multiplayer mode, but at least Nintendo didn’t slip in Mario Bros. with this one too.

Wario Land 4 is a wonderful purchase for anyone who is new to the series or didn’t play the previous games to death. For Wario fans looking for that legendary Nintendo innovation, it just falls short. Here’s hoping that Wario 5 will have the cajones to be different. 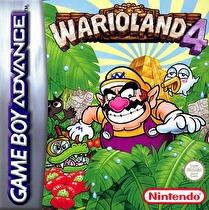