While it certainly isn't a cartridge for everyone for the right audience there are some good things to be said about this walk through the arcades of yesteryear...

OK, so this isn’t one of those games the vast majority of the GBA-crazy public will be interested in. As a matter of fact, short of maybe games like Pinobee I don’t think I’ve collectively heard less about any other GBA launch title. Why? Namco Museum is a simple old school arcade compilation and the only people who are likely interested in it are people like me… the folks who remember pumping WAY too many quarters into these machines back in the day. With the target audience for this launch title being so focused on people who almost have to have played the games before many times to be interested in this cart this review is thus an analysis of how arcade-perfect each of the five (yes, five, Namco threw in Galaxian to be extra nice) arcade classics have been ported to everyone’s newest handheld of choice.

Make no mistake. Out of all the franchises represented on the cart, Ms. Pac Man is the biggest in terms of both popularity and historic success. Her importance is shown pretty clearly on the cart as well, particularly in the graphics department. Since the screens in the old arcade units were vertically long instead of being longer horizontally the GBA simply can’t display the full board properly with its original graphics. Thus, here you get to choose being able to see the entire maze with everything reduced, or you can opt to see the original graphics in scrolling mode. Both work well, though in low light playing in full screen can be tougher as things can be hard to make out at that size. Thankfully though, for the most part the game is fully faithful on a graphical level with those limitations in mind with the attract screen and interlude scenes completely intact.

Aside from the graphics there are a few small complaints I have. For one, not all of the sound is 100% arcade faithful. The opening music is a nice recreation but I was hoping for the more authentic and thoroughly synthesized original opener as it was on the arcade unit. Another very minor detail is in the first movie where the ghosts collide I noticed the ‘bonk’ sound was missing. Minor details but that’s what this review is about. Gameplay-wise my only complaint was not having the speed mode available as this is the style I’ve gotten used to in most units I’ve played in the last few years and things are a little mellow at the original speeds. All in all a fine effort to give this classic the treatment it deserved.

Without a doubt in terms of small issues and considering you’re converting a game that had an analog steering wheel to play with in the arcade to a system with only digital control available this conversion is hurting the most. On the level of appearances the simplistic attract screen is there and what graphics were cut off to fit the GBA screen weren’t missed so the game looks great and generally arcade faithful.

It is when you walk away from the looks of the game though that this conversion has some problems. In particular the care in reproducing the original sounds is disappointing. Everything from the engine sounds to the skid sounds to the sounds as you drive on the edge of the track lack authenticity and in the case of the engine the sounds in the place of the original are just short of annoying. The killer though is beyond the control of the people doing this conversion. Digital control just doesn’t work well for this game, though having played Konami Krazy Racers I would say there’s proof it could have been better than it is for this classic.

I’m happy to report that all things considered this is the most faithful translation of the arcade classic to the GBA. While the screen must scroll in order to use the game’s original graphics everything I can see in the game is spot on for recreating the look of the original right down to the attract mode (though the colors for the attract mode seem off a little). In addition to the graphical splendor of the conversion the sounds seem to be perfect in all cases from the music, to the pumping sounds, to the sound when a rock falls and squishes a bad guy… it is all authentic as far as my ears can tell. They even got the high score message perfectly recreated from the original game telling you to then try to beat the world record. For fans of Dig Dug this was an incredibly strong conversion and nothing to feel any disappointment over.

When it comes to space shooters this seems to be the arcade classic of choice for most people and for good reason, out of the early ones it had the most variety. For fans of this classic there is both good and bad news. The good news is that everything looks pretty authentic to the original game, the bad news is it all had to be scrunched up a bit to fit the entire play area on to the screen much like the full screen of Ms. Pac Man had to be handled. In the end they had no choice but to go this route and the result is fine, just something worth noting in case this sort of change may bother you.

Outside of the graphical change there isn’t much more to report here, the game is pretty well unchanged otherwise. You can still get your dual-ship action going with ease and particularly with your dual-ships you can whoop some ass nicely in the challenge stages. One minor complaint would be that the sound for the alien tractor beam pulling up your ship is missing something from the original but that is nitpicky, just a detail for the purists out there.

Since this game was thrown in ‘for free’ it is a little harder to be critical of it, but I’ll do it anyway. Again graphically the game had to be compressed to fit it all on screen, that’s fine. Next to Galaga the game is much more dull without a doubt, that I could excuse as well. I was shocked to hear that the sound, for the most part, is right there with the arcade original, with even the somewhat odd sound as you fire off a shot being well replicated if it isn’t actually the original sound. Now for the real killer though, the simple sound of the alien formation moving is enough to get on my nerves. It is a relatively useless sound but damn if you won’t hear it pounding away loudly over the much better and useful sound effects. By far you can see why this game wasn’t touted as being part of the package. The original is heavily overshadowed by Galaga and the translation doesn’t manage to make the game any less dull, instead they’ve actually made it worse with that damn formation movement sound.

In the end this cart isn’t for your average gamer and it obviously won’t be a best-seller… but that’s fine. For people who like to wax nostalgic for these classics from the good old days though if you can get over the fact that nothing has changed and not all of the ports are perfection there’s nothing that makes it difficult to recommend the purchase. For the most part these are arcade-authentic (except for people like me who are very picky) conversions of some great arcade originals that you’ll now be able to pick up and play anywhere. Considering it is also cheaper than typical third-party carts on the shelves I’d say old schoolers could certainly do worse. That is, critically, if you can overlook the lack of saved High Scores. For me personally this omission is devastating but for some people you may be over to overlook this fact for the sake of nostalgia.

While it is difficult to be hard on this compilation in this area you simply can't ignore that the limitations of the screen make it impossible to do 100% accurate full graphic conversions from the arcade originals. With that said though for the most part the effort to do the best job with what is there is apparent, warranting some applause.

Considering there are samples of many of the original arcade sounds floating around the failure to make all of the game sounds 100% arcade authentic for all titles is disappointing. Granted, most of the games do an admirable job of this most of the time but the GBA can pump out some great sound and you'd think they could have hit this one right on the head. Add in some annoying constant sounds in both Pole Position and Galaxian and there are some real shortcomings here.

With the exception of the horrendous time you'll have controlling your car with a digital pad in Pole Position the controls for all games are terrific... though considering the simplicity of things this isn't necessarily a difficult task. In the end though, you won't have any control issues here.

OK, so they're all old games but really I think for the most part they've aged well and are still playable today for people who don't dismiss them immediately for simply being old. The lack of the speed button to make Ms. Pac Man more in line with modern gamers' reactions was a slight disappointment though.

I would love to give this area a better score but there is one small reason I can't and unfortunately one large glaring flaw I can't overlook. The small downer is that while I love these games and will periodically hit this cartridge for some fun this is a purchase more for nostalgia value than for plain fun. The bigger problem is really a kicker though... the cartridge doesn't record high scores. I'm sorry but this absolutely cripples the long-term value of this cartridge. Being able to try to beat your old scores would be an excellent incentive to return to these games more often but the lack of this ability is a huge blow since you simply won't just remember your scores to beat later.

While there are some merits to this cartridge for the effort that has been put in for whatever reason the lack of ability to save high scores really almost ruined the cartridge completely for me. Granted for games like Ms. Pac Man you never were able to put in your initials anyway but even being able to see the best score you've had to date would have been a great incentive to give the games a whirl every once in a while to beat your own or your friends' best scores. Without that ability there's a lot less to sell here as you're riding on almost pure nostalgia alone... which is all well and good but one small save feature could have made a world of difference for this cart. 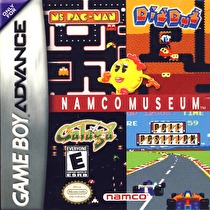