Try to be Europe’s best football manager, though watch out for some slow moments.

If you told me that the Calciobit series, a weird portable football (soccer for you Americans) management simulator published by Nintendo, was coming to Europe, I might have called you a liar. Color me surprised when the series came over to Europe in the form of Nintendo Pocket Football Club. From a notoriously confusing and deep sub-genre of sports games, Nintendo Pocket Football Club simplifies the experience without dumbing it down. It all starts with the localization, which is absolutely top notch. Calciobit is a uniquely Japanese game, and Nintendo’s crack team transformed it into a quirky European version. It captures the zany spirit of the series while still being one heck of a football game. 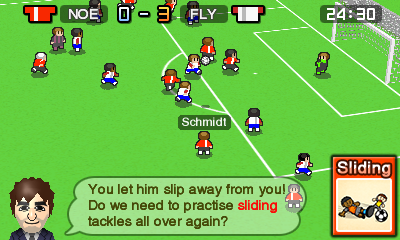 Nintendo Pocket Football Club tries to make an accessible football management game. It’s no simple task, because that style of sports game is routinely laced with vast arrays of systems and mechanics. Even with the colorful graphics and cute digitized sound effects, Nintendo’s attempt is still a little complex, but it makes the opening experience gentler. To begin, there is ample time to get to know your team and how to manage them. Through training sessions, players improve with different cards. These training cards are paramount for building your team, slightly increasing player stats. The early goings are essentially a sandbox to get a handle on the way games play out, focusing on the nice button and touch screen control options to manage your team.

When the real matches start up, having the right strategy is essentially the whole game. The strategy employs a lot of different options, ranging from keeping opponents in check to bringing in substitutes at the right time. The options are just slightly limited, but the game shines in this simplistic setup, even if it has the propensity to drag on. One way that Nintendo Pocket Football Club differs from many other management sims is you can't fast forward matches. Sometimes it’s nice to just sit back and watch, but it can get a little long in the tooth. During matches, you have less influence, which is a bummer. The trick here is that you can change stuff between halves or swap players. 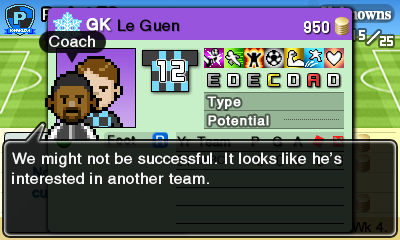 The entire experience is built so that way you almost need to lose games sometimes, as even in a loss, you earn training cards to improve your players. That’s not the only way to improve your team, though, as you can also watch game film (it saves your match replays) to hone your strategy, and you can scour the in-game transfer market and attract new players. You can even go online to check for new players or sell off your current ones.

In addition to the online transfer market, there is online multiplayer, though you don't have direct strategic control like you do normally. Instead, you toggle and set sliders and see the games play out based on your initial strategy. With StreetPass, you can compete against teams from other owners of the game. If you want more direct competition, you can also play locally against other friends (multi-copy only). Each connectivity option adds a ton of replay value. With online rankings and official tournaments from Nintendo, there is ample reason to hop online with your football club. The pure satisfaction of watching your strategy executed is very rewarding time after time.

Nintendo Pocket Football Club is a great introduction to the football management genre and a fun 3DS eShop title as well. The game deals with deep mechanics, but it is lovingly presented in an easy-to-learn manner that teaches you at a medium pace. More interaction during the matches would have been appreciated, especially since the matches can’t be fast-forwarded. At the end of the day however, thanks to the great connectivity options and superb localization, this is one sporting league I want to be a part of.