Time travel can't save the empty button mashing with the Aeternoblade.

The feel of a PlayStation-era 2D action platform game in true Metroidvania style is what Aeternoblade’s aesthetics and gameplay footage promised when it was first shown. The art style—especially the character designs—obviously borrows from the Final Fantasy games of the era. If this would have been combined with the exploration and controls of a Super Metroid, Corecell Technology would have a definite hit to their name. 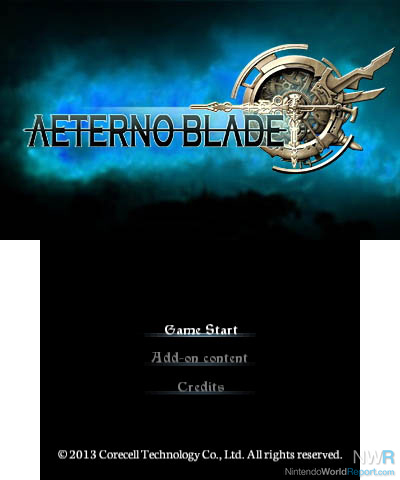 After a cutscene which looks nice, albeit seemingly straight from the early 2000’s, we jump into the action. We follow our heroine, Freya, at the height of her conflict with the evil Beladim. Seeking revenge for the destruction of her hometown, Freya confronts the demonic lord, but the battle results in her death. By the power of her sword, the Aeternoblade, she is able to go back in time in order to re-attempt her quest to bring Beladim to justice.

The time travel aspect is a nice touch and quite subtle in its execution. Freya is able to rewind time at any moment, allowing for the correction of mistakes in battle and semi-interesting puzzles. The latter never gets any better than a platform that moves in an opposite direction after hitting a switch. By reversing the order of time, Freya is able to create a new passage way which wasn’t possible before. It’s nothing mind blowing, but it’s a nice change from the running around and hacking away with your blade. In battle and more specifically in boss battles, this rewinding of time is a helpful aid but it also takes away from the game. Although the ability is limited, I was able to rewind portions of boss fights long enough to keep the giant enemy in a position where I could keep hitting it without ever receiving a single blow. Not that some of the bosses aren’t that much of a fight—as you will die repeatedly—it feels like you are betraying the system, cheating on the game. 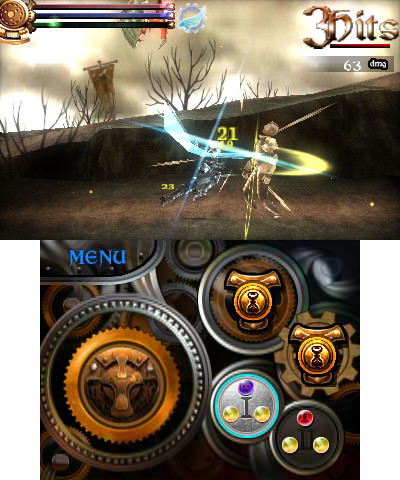 The boss fights might be interesting, but the other minions of this dark army do not pose as much of challenge. You can easily hack your way through hordes of re-spawning enemies, which all feel a bit lacking in creativity. Flying heads, brownish mud men who couldn’t land a hit if you were standing still, and walking suits of armour all make an effort to stop you in your tracks. The action tries to be engaging by presenting you with unlockable attacks, but never reaches beyond the mashing of the Y button to spam attacks. Freya connects attacks into sequences which are great when actually hitting the target, but when missed her attack animation still plays out. It feels archaic to see our supposed warrior queen hacking away in the air as the enemy stands behind her. Like the battle sequences, the platforming doesn’t fare much better. Usually Aeternoblade offers you the choice between two paths; one high and one low. There is the occasional pit of spears to jump over, or the before mentioned platforms, but they never require much thought or challenge to pass. Aeternoblade has the ingredients to make for a successful action platform game, but fails miserably in its execution.

Visually the game feels completely empty. Freya’s model and some of the other main characters like Beladim come across alright—especially when in dialogue—but the environments and enemies lack any form of detail. Everything seems to be build out of big, rough blocks in order to keep the framerate up. Although it exceeds in this, the player is left with the feeling that Aeternoblade could have looked a lot better. The 3D effect would be totally negligible if not for the annoying damage counters which pop out of the screen. Contrary to its intended message of “look at this cool effect”, it feels out of place and really takes the momentum out of the game. 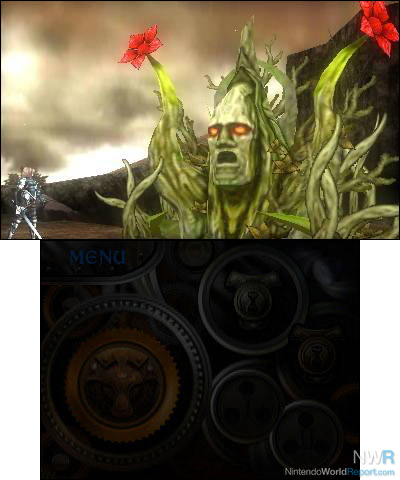 Here lies another one of Aeternoblade’s annoyances: the game unfolds so slowly and even though it’s not text heavy, it feels the need to point out obvious solutions by using the camera. Imagine this: you walk into a new screen and the game stops you. The camera slowly slides to a switch after which it pans wide, to then slowly zoom in on a platform. During this 15 second animation, you have already gotten the message as it is so blatantly obvious. It is hand-holding that the game doesn’t need.

Unfortunately, this sums up Aeternoblade quite well. Rather than the fast-paced, explorative action platformer with a cool time traveling twist, Aeternoblade turns out as a dull repetitive button mashing without much soul.

The demo didn't leave a good impression on me, and it appears that is reflected on the full game. A shame.


I think the developer is among the first from south east Asia to begin making their own games. I hope they get another shot to do better.

Yeah, the demo wasn't anything I really enjoyed, so I wasn't expecting much from the full game.