Were all problems to be solved with anime, we wouldn't need this game!

The One Piece franchise is a juggernaut and one that has been around since 1997. There are 72 volumes of manga, over 600 anime episodes and various branches of merchandise and video games. One Piece is mostly known for its unique style and larger than life characterization which the games tried to emulate in the best ways they could. I really loved One Piece on the Game Boy Advance, but after that, none of the offerings clicked well enough to be full on great games. That being said, they were mostly enjoyable and filled a nice niche for the audience there. Does One Piece: Romance Dawn deliver in the same fashion? Not quite. 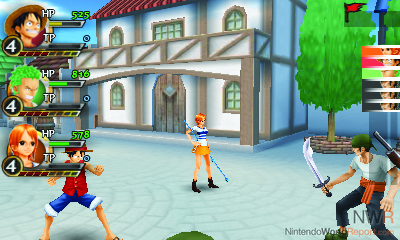 Romance Dawn tries to do the impossible and wants you to experience 390 anime episodes in a single piece of software. At first, the sound of this seems sane and it might be a nice way to bring in newcomers. The sad fact is that the game does a terrible job at explaining anything that happens. Before you go into an actual ''cutscene'', you are presented with some exposition that sets up the situation. You meet characters for the first time, but the game forgets to give them a full on introduction. Instead, you are presented with half-hearted attempts of ''This is this character and he/she did this...”, which after a while drives you a bit mental. The cutscenes themselves are mostly walls of text which you have to go through. They serve some purpose to the narrative, but the way these and the exposition are balanced feels way off. There are a few anime cutscenes thrown in for good measure, but they are rather short.

If you didn't like the fact that the game doesn't explain the plot, be ready to be more disappointed with the gameplay systems. Mere moments after struggling through a whole bunch of text, you are dropped into the regular course of the game. You are not hindered by tutorials or hints because there are simply none. It is one of those rare cases where going through the manual is necessary to figure out how to play. In the game, you have to walk through various locations and survive what the game calls mazes. Personally, I think they can better be described as corridors that force you to walk from hallway to hallway until you finally end up at a boss. They are mostly boring passageways with nothing to make them truly interesting or fun. 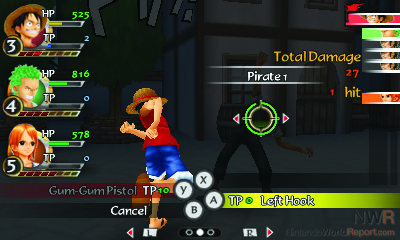 While going through these corridors, you will be tasked with collecting items and defeating enemies along the way. The game tries to make things more exciting with Grand Stream Actions, where your characters will auto-run and require the player to tap on certain buttons to avoid dealing with enemies. They are not impressive, but a nice change of pace at the very least. Your field adventures are decided on the World Map where you select the places you want to go to. Next to the regular episodes and events, there are also special field quests which you can unlock. These will change up every time that you play them and even allow you to tackle some additional bosses. On the World Map, you can also sail to shops and purchase more items for your upcoming adventures.

These items will certainly help you during combat, which the game will once again not explain. In typical RPG fashion, you will have to wait on each other's turn to attack and can select from a pretty simplified menu. It is a bit more free form as you can move your character about and position yourself correctly, but you only have four attacks available to you at one time. It is possible to set up two additional pages with attacks that you can switch to on the fly, but I saw myself mostly sticking to one. Some of these attacks can be performed at any moment, while others require TP, or technical points to work. TP is earned with every successful move so it is pretty easy to earn and ultimately take advantage of them during battle. You can also Guard yourself, use items in your Pouch, make use of a special ability or simply run from the fight. It is pretty straightforward and once you get the hang of it, it becomes a walk in the park. The battles also earn you experience and some money to further boost the three characters in your party. 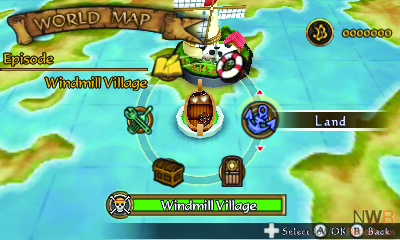 The game looks well enough on the Nintendo 3DS and it offers the player some strong, colorful visuals. The major issue I have with it all is that One Piece: Romance Dawn doesn't feature any stereoscopic 3D visuals. The game seems tailor-made for the feature as you have to look far into the corridors and could use it to judge the distance to enemies better. Why it is missing is a rather big question, because the game doesn't really seem to push any boundaries of the system. Some of the animations look a bit strange when you view them up close, so that might have something to do with it. In one particular instance, Luffy's eyes magically disappeared when he breathed in and came back two frames later. Despite some visual and technical hiccups, the sound design is pretty solid with Japanese voices and some nice music to back it all up.

One Piece: Romance Dawn isn't quite the game fans have been hoping for. While the gameplay is pretty standard for an RPG, the endless corridors soon make it a somewhat boring affair. The whole idea of including 390 episodes of canon is novel, but it doesn't make the ride any better or well balanced. Newcomers and veterans alike will scratch their heads at missing plot points or elements that are simply glossed over leaving only hardcore fans knowing what exactly is going on. The presentation is acceptable, but the surprising lack of stereoscopic 3D and some weird animations will make it not all exactly tick. The open sea of 3DS software has a bevy of good games to explore but sadly, Romance Dawn isn't one of them.

Seeing this is out in the States but only limited to GameStop locations, I don't feel bad missing out on this game after reading all of these negative reviews. Then again I don't care for One Piece.

This is a PSP port. When it came out it wasn't well received, so I'm not surprised about the low scores for this version.