No amount of "meh-edgehog" puns can save Sonic from mediocrity.

Being the biggest, and one of the only, Nintendo third party exclusives of this fall, Sonic Lost World gave many a gamer high expectations that it would deliver a fun, unique platforming experience to the Nintendo 3DS. Sadly, Lost World faces many problems that hinder it from being that game or even just a fun game at all.

Sonic Lost World is mainly made up of three different kinds of zones. 3D zones, 2.5D zones and Boss zones. Peppered between them are highly compressed cutscenes that look like they came off of a Game Boy Advance Video cartridge. Each kind of zone offers different gameplay experiences, and all of them have their fair share of issues. 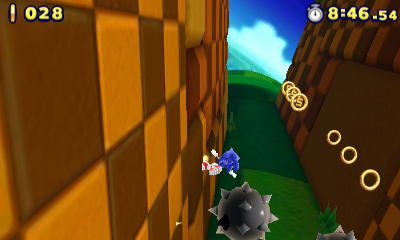 In 3D zones, Sonic traverses game environments using old and new abilities. While all these zones are set in 3D environments, some are much more linear than others. Levels like Zone One of Windy Hill have you traveling in almost only one direction: forward. Thankfully there are multiple paths to complete these kinds of zones, but they still feel too simple. Other 3D zones are exploration-oriented, but are filled with large amounts of repetition. Players are tasked with defeating a set amount of enemies or pushing large apples, snowballs, other objects many times over. This creates a sense of sameness that. at times, made the game rather monotonous.

The ways in which you move in the game were the most entertaining part. With parkour, a new addition to the series, Sonic can run and jump off of walls. This new gameplay element comes into play when finding alternate level paths.

The 2.5D zones were the most entertaining, but also the most frustrating.  These side scrolling levels do a good job of creating a sense of speed, however, platforming can be finicky; bouncing on clouds is an absolute nightmare. Sonic’s movements feel stiff in the air, despite your best efforts with the Circle Pad or D-pad. This combined with a lack of knowing where to go made falling to your death a constant battle. 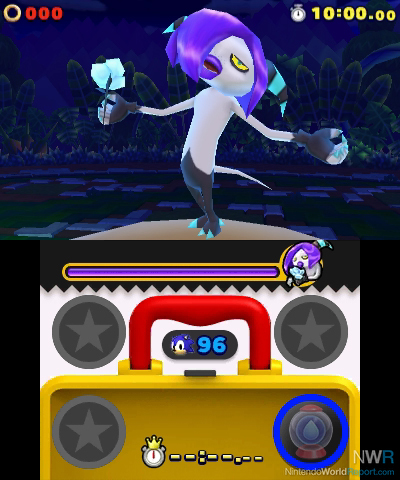 Boss battles in Sonic Lost World feel like a joke. They are incredibly simple and feel forced into the game, for no other reason besides finding a way to use the “Deadly Six” outside of cutscenes. After finding the simple solution to each boss, you simply performed it a few times, and then the battle would be over.

With the help of Tails, items such as RC vehicles can be crafted and used for a limited amount of time in most areas using elements earned at the end of each zone. You can also earn them by paying with Play Coins.  Color Powers have returned as well, and they are the only way to complete many zones. Color Powers come in the form of Wisps. Each Wisp gives Sonic a special ability, such as becoming an iron ball that can roll over enemies and temporary walls using the Grey Wisp.

Outside of the main game, there are a fair amount of other activities to partake in. Online multiplayer is present, which allows you to race and battle other players. Unfortunately online play was unavailable to us at the time of writing. There is also a Time Attack mode that challenges gamers to complete zones using only one life as fast as possible.  There are also motion controlled special stages which are the only way to find the seven Chaos Emeralds, but they are broken and hard to play due to controls that are uncomfortable and a requirement that you move in 360 degrees.

The overall presentation of Sonic Lost World is fair at best. While colorful, nothing in this game looks particularly interesting. There was prominent ghosting when the 3D was turned on, which made the game too confusing to play. The is a highlight as the soundtrack features catchy, but not annoying, tunes.

Sonic Lost World is filled with many missteps that make it disappointing.  Instead of being a good Sonic game, it is just a below average 3D platformer. Despite his speed, the blue blur could not keep up with anyone’s expectations of the game, nor be entertaining in his own right.

Bah Sonic... too many cons skipping that one. Why does 3rd party stuff sucks so much compare to the first party.
I think the reason Nintendo doesn't have many 3rd party is that Nintendo owners expect games on par with Nintendo's own games.  Really Sonic Lost World VS Zelda, Pokemon, Mario and Donkey Kong Country it end up losing every single time!

This is unfortunate. At E3 I thought the 3DS game actually demoed better than the Wii U game. At least, I thought the controls were more responsive on the handheld. Looks like it was not to be, though.....

Kotaku claims that the 3DS version is actually better than the Wii U version based on their review:

No surprise, the 3DS version is made by DIMPS, who have severely declined in their ability to make good Sonic games.

I only played about 3 hours of the 3DS game, but I strongly agree with Zack's review. I think the Wii U version is a lot more enjoyable because of it's superior level design.

Sonic Generations on 3DS was absolutely atrocious, so I sort of had no faith in Dimps whatsoever.
Other reviews (aside from Kotaku) seem to lead me to believe that my doubts were well founded. 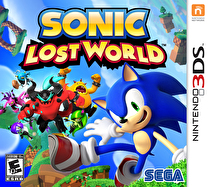