If you are in it for the long haul, please be prepared for a quick halt.

When I get bored these days, I find myself grabbing a controller and playing a lot of Trials Evolution. It’s an enjoyable stunt racer, where you try to get from point A to point B. Unfortunately, there have been few games in that specific style on Nintendo systems, though the same developer (RedLynx) did give us the fantastic MotoHeroz. Though for the true motorcycle experience, our systems were heavily lacking, and we finally got our alternative this week on the Nintendo 3DS eShop. Urban Trial Freestyle from Tate Multimedia is a competent take on the genre, but it doesn't do much to differentiate itself.

Your goal is to overcome 20 courses, which are spread over five different areas in packs of four levels at a time. You must show your worthiness by using your tight biking skills and finding the right balance between speed and precision. This is easier said than done, as you cross track designs that that, due to their size, have to be solved like puzzles. The tracks become progressively harder as you move along and you’ll find yourself retrying several stages. This can be frustrating, but luckily the game comes equipped with checkpoint system that makes the game somewhat forgiving. However, it doesn't make up for the countless lives I have lost from making mistakes, which mostly came from the deviously placed course obstacles. The controls of Urban Trial Freestyle are pretty solid though, as you use the Circle Pad to balance yourself along the way. Various buttons are of course used to accelerate, brake and reverse; it won't take long before it all grows on you. 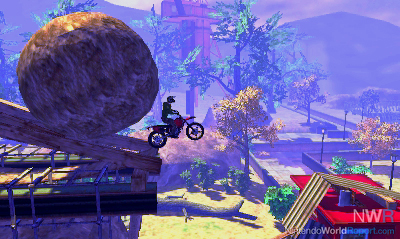 What is important about the game though is learning how these various courses function and getting good at them. The game supports direct leaderboard connection over Nintendo Network, which allows you to compete with your friends. Unfortunately, if you are not interested in that, the game won't last you more than a couple of hours. You can always try to collect all five stars in the two available modes: stunt and time trial. In stunt, you will get various objectives and will be rated on every single one of them. Sometimes you will need to perform long jumps, while other times you are required to reach a certain speed. Time Trial is way more straightforward, as you just try to not screw up much and reach the end very quickly.

At the end of every level, you will get rated with a certain amount of stars. For the player, it is always important to get three stars or higher, which rewards you with new tracks, outfits and bike parts for upgrading your ride. If you manage to rank five stars, you are rewarded with new challenge minigames, and there is one each for every area. There is, for example, Platform Madness, where you try to collect as many coins as possible before a timer runs out. They are certainly very enjoyable, but they won't add many hours of replayability.  One thing that is exclusive to the Nintendo eShop version of Urban Trial Freestyle is the ability to create your very own tracks. The idea is very novel and the editor is simple enough to use, but ultimately there is no way to share your creations with others. This could have been implemented as SpotPass or StreetPass feature, but, for whatever reason, the developer chose not to. It feels like a wasted chance, as the various set pieces could have been used well by a large community. 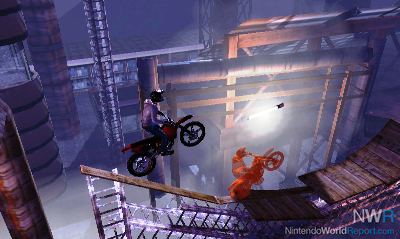 The presentation of Urban Trial Freestyle is certainly impressive. The environments are quite expansive and have an abandoned feel to them. The 3D effect on the Nintendo 3DS is also implemented well, and the various backgrounds have good placed layers, although the tracks don’t really pop out very much with 3D on, which is a shame. The music featured pretty much just rocking tunes, which was a good fit for the game's overall presentation.

Urban Trial Freestyle may not be the best thing you will play on your handheld, but it doesn't do many things extremely bad either. If you are interested in crossing over wild terrain and don't mind the frustration all too much, you are still going to have a good time. I would have liked the game to be a bit longer, as I feel it stopped when it just really got going. With no alternatives around though, it still worth considering at the very least!

The fact that Ubisoft is not bringing REAL new Trials game on 3DS and instead making a tablet version was the biggest disappointment of entire E3 for me.

I've watched footage of this game on PS3, it looked alright for an obvious clone. I also nearly died of laughter watching Quick Look of other Trials clone.