Fast-paced hunting: good for you, bad for the food chain.

The few times I went hunting, I spent a couple hours sitting by a tree, waiting and watching for a deer to walk by. I returned home from these trips empty handed, with nothing to show but my cold hands and feet. This feeling of failure is eliminated in Wild Adventures: Ultimate Deer Hunt 3D, as you march through levels killing nearly everything in sight. While the game may be a nightmare for wildlife lovers, the slaughter of hundreds of animals is surprisingly not that bad of a game experience.

The game is split into 19 levels, each roughly two to three minutes in length. The bite-size nature of these levels makes the game accessible, especially on a handheld. Despite its pick-up-and-play nature, Wild Adventures is susceptible to some issues that hamper the experience. Deciding between the Circle pad or touch screen as your control method is like choosing the lesser of two evils. The Circle pad is faster for aiming, but less accurate; the touch screen is slower for aiming, but more accurate. Eventually, you may grow to enjoy one control method more than the other; however, neither is suited for the game’s score-based nature. 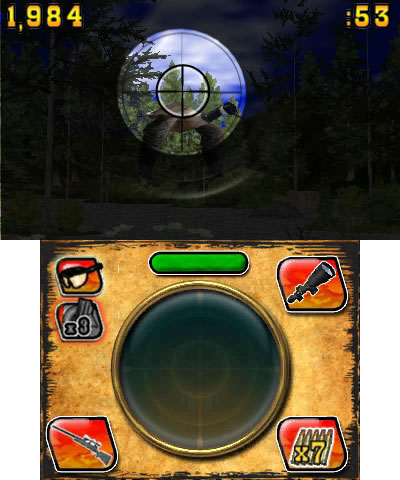 Wild Adventures: Ultimate Deer Hunt 3D is an arcade shooter at heart, and it certainly delivers in the arcade scoring department. Taking down any of the game’s 20-plus animals consecutively builds up your bonus, while a miss can knock you back to square one. While the aforementioned controls make this a hard task, the feeling when you reach a 10-hit combo is fantastic. Power-ups are occasionally attached to some of the critters running across the screen, and are vital to you keeping your combos going.

For the collector, there are plenty of in game trophies to collect. Taking down so many of one kind of enemy adds their head to the wall of your hunting lodge, while simply killing 500 animals with a rifle earns you another. These trophies are not difficult to collect, and amount to decent time-consuming ventures.

The game’s environments and animals look fine on the system’s top screen with the 3D effect both on and off. The sound design, however, could have used more work. All the stages use the same track, and while it is certainly upbeat enough, it doesn't seem fitting for a hunting outing.

With short stages and an underlying arcade nature, Wild Adventures: Ultimate Deer Hunt 3D works well as a downloadable title. Control issues aside, the game is well made and a good deal of fun. There isn't much to do unless you are a trophy collector, but if you want an arcade shooter, you could do worse.