Nano Assault launched in North America back in 2011, but this spiritual successor to the Nanostray titles never saw the light of day in Europe. Nano Assault EX is an enhanced, eShop-exclusive version of the original, and features updated graphics, a new survivor mode, and support for the Circle Pad Pro, something Neal clamoured for when he reviewed the game back in 2011. At its core, the game is a twin-stick shooter and plays similarly to Nano Assault Neo for Wii U. Shin’en has adapted the control scheme well to the 3DS’s button layout, and I never felt hindered by the lack of a second stick. However, having said that, I would still imagine use of the Circle Pad Pro to be preferable.

Nano Assault EX’s story mode is split into 32 missions across seven clusters. Missions fit into three styles of play – ground, air, and boss fights. The ground-based missions plunge you into the middle of the Nanostray virus and onto an infected cell. Typically, you must clear the cell of any hostile organisms and collect three strands of DNA in the process. Shin’en is no stranger to Nintendo platforms, and I couldn’t shake the feeling there was some specific influence here: the cells feel like Super Mario Galaxy’s planetoids, only infused with a decidedly Metroid-esque vibe. The enemies on these mutated cells are plentiful and varied, each with their own behavioural patterns and attacks. Some chase you down; some are more placid; others burrow underground to attack you from beneath. The range of enemies keeps things fresh, and keeps you on your toes. 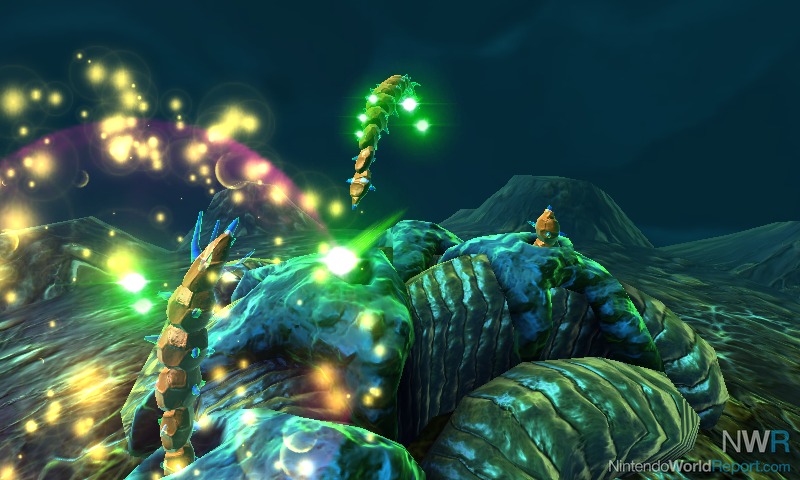 EX’s ground segments are its weakest part, especially in contrast with the quality of its air-based missions. Taking cues from Nintendo, the on-rails flight sections feel similar to Star Fox, specifically Star Fox 64. These fast-paced, frantic firefights are where the game—and its gorgeous 3D engine—shine. Without a tangible reward for defeating enemies, it often feels like you’re better off simply dodging their attacks than returning fire, but the difficulty gradually ramps up, necessitating your retaliation. Even as a shoot-‘em-up novice, I found the game more than hospitable. The somewhat tepid difficulty may turn off purists, but EX is not an easy game by any stretch of the imagination. You’ll fail a lot, but not because of a masochistic, scream-your-head-off-and-tear-your-hair-out difficulty.

You face a boss at the end of the land and air segments. These fights are fun for the most part, and offer the tensest, most chaotic, and visually stunning moments of Nano Assault EX’s brief campaign. Taking a leaf from the book of Metroid, bosses feature big, glowing red orbs on their bodies, indicating where you need to hit them in each of their forms. These encounters are enjoyable for the most part, though one boss more or less just stood there and let me destroy it. 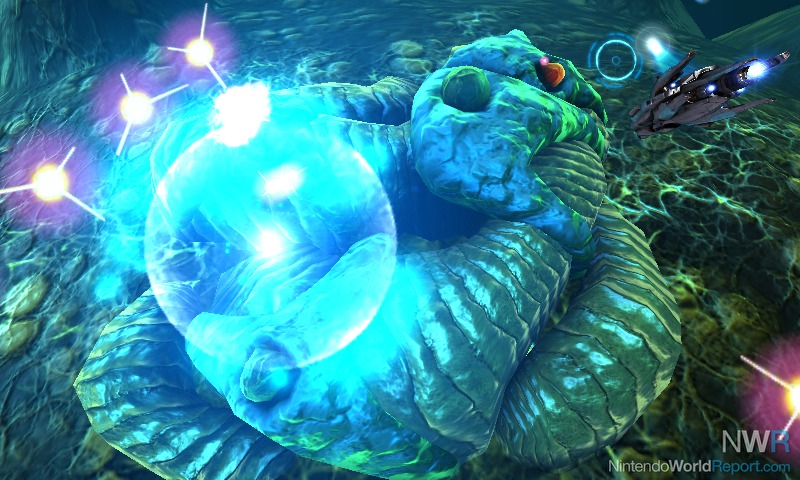 Aside from some lower-resolution textures, Nano Assault EX looks almost comparable to the Wii U version. It’s not quite as pretty, but it’s not worlds apart, either. The 3D effect is great, too; not only could I tolerate having the slider all the way up, but I’d actually recommend playing that way. Whether it’s the gorgeous lens flare effect floating above the action, the microscopic ship visibly whizzing back and forth in the foreground, or a cavalcade of laser beams and bullets penetrating your eyeballs, EX’s use of stereoscopic 3D not only looks great, but provides a genuine advantage over playing in 2D. It allows you to more easily discern distances, not only between yourself and any incoming bullets, but between the bullets themselves, making weaving in and out of danger that much more manageable.

The 3D effect is most prominent during the boss fights and air segments, where the illusion of depth is both impressive and believable. What’s more, you can even shoot burst weapons by holding down the fire button, so there’s no reason or tendency to ever leave that 3D sweet spot, particularly if you’re playing on an XL system. There is, however, a price to pay for all this visual loveliness. Turning on the 3D disables the anti-aliasing and so there are noticeable jaggies. The frame rate also stutters occasionally when there’s a lot happening on screen, and there’s some slight ghosting in dark areas. 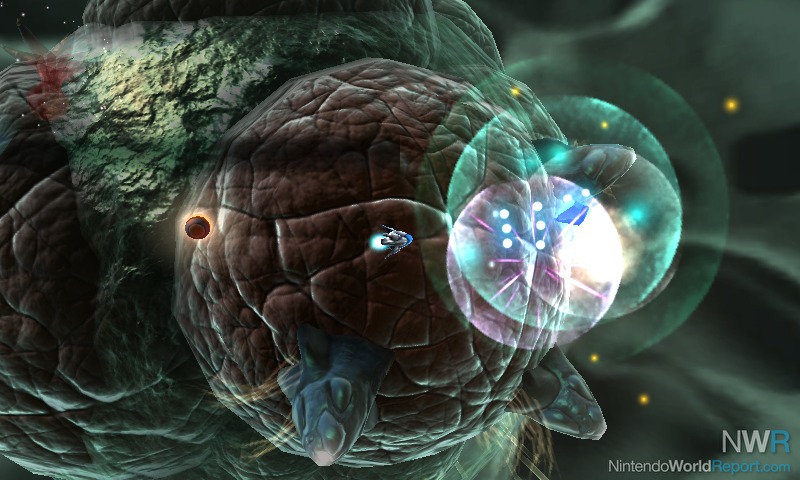 After completing the campaign, you unlock a self-explanatory boss rush mode where you race to defeat bosses as quickly as possible before posting your score to the online leaderboards for friends and strangers alike to challenge. EX also adds a new survivor mode, which pits you against the game’s levels with a single, paltry life. While a nice addition for those who want the challenge, it’s a shame you have to play through over 10 hours of content just to access it. Other additions are largely filler. There’s a Nano Shop where you can convert 3DS Play Coins into in-game currency to spend on tracks from the game’s score and viewable 3D models, like in Super Smash Bros.

If you already picked up the retail version of Nano Assault, there’s little reason to take the plunge into EX, unless of course you found the original’s control scheme particularly egregious. As a standalone game, however, Nano Assault EX is fantastic; it’s the definitive version of an already great game, and on that basis alone, it’s worth your attention. Shin’en signalled their intent to develop high quality downloadable games with the stellar FAST Racing League for WiiWare, and the five-man team have once again delivered one of the standout digital titles on a Nintendo system. Gorgeous visuals coupled with a stunning use of stereoscopic depth make for one of the most graphically accomplished packages on the Nintendo 3DS. Luckily, it’s a lot of fun to play, too.

I think you've sold me.

I've read so many reviews about this game and have been agonising over whether or not to buy it (I don't own a CPP and think the face-button control scheme sounds dumb), but despite my reservations about the control scheme the sheer amount of positive reviews means I'm going to have to buy to try. I really wish it had a demo though.

This game was something of an impulse buy for me, I just saw it on eShop last week and thought the trailer looked great, so after seeing some positive reviews of the retail version I decided to download. That was definitely the right choice, the game really is tons of fun and the visuals are amazing for the 3DS. Anyone looking for a good shooter or some 3D eye candy should definitely check it out!

Oh wow I think I've just been sold too. Tried the series for the first time on Wii U, and this 3DS version sounds even BETTER!

I've had a lot of fun with Nano Assault Neo's multiplayer on the Wii U. Does the EX version on the 3DS have any multiplayer?

Does the EX version on the 3DS have any multiplayer?

The article says its 1 player, so no.

Does the EX version on the 3DS have any multiplayer?

The article says its 1 player, so no.


It's possible that they read the review on the forum (where it does not display the Game Profile information). The review refers to a campaign but doesn't explicitly state whether or not there is a multiplayer option. A multiplayer mode does sound pretty cool though.

Re Nanostray, both of those games were released in Europe, I know, I live in Ireland, I own both for the DS.
Very nice they are too!
The first Nano Assault game was cancelled in Europe, though we got the forgettable Nano Assault Neo for the Wii U as an early E-Shop game.

Rory, I have the opposite opinion from what's expressed in the review: I love the ground-based levels but was turned off by the air-based missions.

Maybe it's because I played Neo on Wii U first (and loved it) that I found the ground-based levels more enjoyable?

In any case, the air-based missions just feel "off" to me. I can barely aim at enemies with any amount of accuracy due to having so little control over where I am trying to aim while also trying to dodge hazards.

I'll admit, boss fights are pretty awesome, but again the simultaneous aiming and flying makes it a bit annoying.

And I realize Star Fox 64 has a similar set-up, but I think that game is simply better designed in terms of control. The aiming cursor just naturally follows where you maneuver the Arwing.

Perhaps I would enjoy the game more with CPP, but... I'm not willing to shell out $20 (+ shipping) just to use it for this one game