Spin Cycle doesn't quite hit the highs of the original, but it is still a great game.

The original Fluidity (or Hydroventure, as it is called in Europe), which came out in late 2010, was the cream of the crop on WiiWare. Controlling water through an open, storybook world with Metroid-like progression was fascinating, fun, and fantastic. The game’s 3DS eShop sequel eschews some of that exploration for a portable-friendly, level-based progression. For the most part, the charm and quality of the original shines through even in Spin Cycle’s abbreviated levels, but in some ways, the game falls short, specifically in the many 360-degree rotation stages.

The controls in most levels are fine, showing off how the 3DS gyroscope can work well with small, precise movements. Wielding your water effectively is easy, and using a combination of large touch screen buttons and the shoulder buttons to interact with your mass of water is easy and intuitive. It’s occasionally frustrating to keep your water together, as it splashes around freely in liquid form, but once you get the hang of the way the game works, the issue lessens. 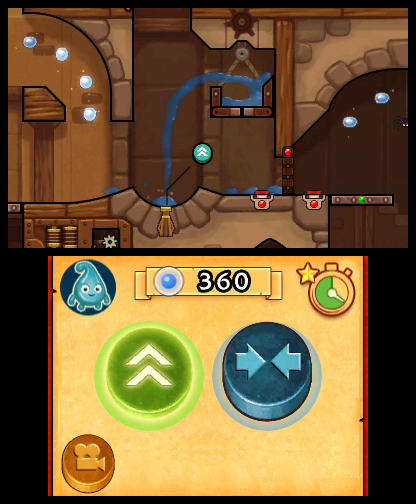 One issue that doesn’t is the concept of spinning the 3DS in a circle. Some levels, which are marked accordingly, require you to spin the 3DS around in a 360-degree rotation to progress. Not only is it disorienting to play a 3DS game like this, but because of the placement of the volume slider and the Start/Select/Home buttons, mistaken button presses are plentiful. To boot, sometimes you need to turn the system upside down and press a touch screen button to do something, so you either need to stretch across the top screen to press the button, or hold the system at the top and look at the action in a weird, low position. If you have an original 3DS, these issues likely won’t be as big of an issue, but if you have a 3DS XL, with easier-to-press Start/Select/Home buttons and a bigger frame, moving the system around can get dicey. You can circumvent the accidental button press issues by holding the system parallel to the floor and tilting it in different directions to do the spin cycle levels, but that is still a difficult experience on the 3DS. You certainly can get used to it, but despite some interesting and novel level design, the 360 degree rotation levels are too frequent and too frustrating.

The levels that don’t feature the full rotation are excellent, fortunately, especially as you near the end of the game’s 60 levels. While the individual goals in each level are fun and reminiscent of some of the objectives in the original, the lack of overworld exploration is sorely missed. Instead of an expansive open world like in the original, Spin Cycle is linear. Levels feature some minor secrets, and exploring those nooks and crannies can reward you with a puzzle piece, used for unlocking bonus sandbox levels, and excess water, used to increase your end-of-level rating. You gain new abilities that can open up puzzle piece hiding places in earlier levels, but for the most part, what was a once unique Metroid-like exploration game is now just a linear platformer. It’s a bit of a bummer. 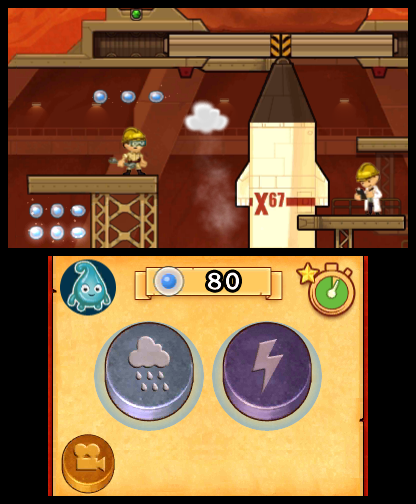 Fluidity’s return features of a hell of a lot of whimsy, though. The game has a story now, putting you in control of a heroic water droplet named Eddy who strives to save a bunch of cute, female Rainbow Spirits from the villainous Goop. The worlds are a lot more outlandish, too; for example, the first world features a whole lot of dinosaurs, and one level features a spaceship taking off.

The game includes four worlds containing 15 levels each. In addition, the puzzle pieces and five-star rating system provide a bit of opportunity for replay value. The experience is still fun and definitely worthwhile, but it’s disappointing after the strike of lightning that was the first Fluidity. Check it out if you want some straightforward water-platforming action, but if you were expecting layered, explorable worlds, Fluidity: Spin Cycle isn’t that.

I'm pretty much in agreement. It's good fun while it lasts, but it lacks the sense of exploration that made the original so great.

I'm actually enjoying Spin Cycle a lot more than the WiiWare original (and I really liked that game). The style is better, and I like the more linear levels. The 360 degree rotation levels are definitely the weak point, but I'm still  having fun with them.

Anyone ever take one of those Spin Cycling classes? I hear it's good for cardio.

The first game is about the only WiiWare game I liked, however since this is published by Nintendo then I'll wait and see if it's offered as a Club Nintendo award.

Disagree 100% on the full rotation levels. I had no issues controlling them whatsoever and I found that the puzzles they contained were far more unique and inventive than the partial rotation levels, which felt like they were rehashed from the first game.

I agree with StrawHatChopper and accc. I loved Fluidity on WiiWare but, as neat as the exploration was, I found it frustrating at times and got tired of progressing over the same early landscapes over and over. I really like the tighter design here, and it allows a kind of score-attack that wasn't in the WiiWare game. And the visuals are more detailed and interesting, with more moving parts and cute nods to classic fairytales and other familiar themes. Really hooked into this one right now.

I have to say, I'm very surprised that so many people prefer Spin Cycle to the original. Maybe it's just because I absolutely love games which are inspired by Metroid and it's particular brand of exploration, but Spin Cycle just doesn't scratch that same itch that the first one did. I never got tired or frustrated exploring in the original primarily because I was always unlocking new areas and upgrades everwhere I went. Spin Cycle, in my opinion, also asks the player to replay through areas, but it does so in a far less interesting fashion (Score & Time attack are features that I would have liked to see added as modes, but for them to become the focus at the expense of the explorative nature of the original is a little dissappointing).

One last thing. The art style in Spin Cycle is largely comprobable to the original's (in other words it's great looking), but I do feel that the original was more consistent in applying that look. The original went for a look which was inspired by school science books and safety pamphlet diagrams, and it's scenery and settings play into that. The thing that seems kind of odd to me, however, is that Spin Cycle tries to apply that same instructional imagery to more fantastical settings.

Both games looks great, so I guess ultimately it doesn't matter, but I do wonder if Spin Cycle might have benefitted from having a different art style, one which reflected it's more fantastical nature. As LittleIrves mentions, the areas in Spin Cycle seem more inspired by fairytales and children's story books than scholastic textbooks; it would have been cool to see them apply a fairlytale-inspired art style to the sequel. That might also have meant making more changes to the engine which would have meant more time and money, so maybe that just wasn't feasible with a game like this. Still, it would have been cool to see.

I'm looking forward to getting back to Spin Cycle after I've completed Paper Mario. Regardless of my preferences for how I would have liked the series to develop, I'm delighted to have a sequel.

With Sticker Star out of the way I've spent the last two days really digging into Spin Cycle.

I simply can't not go for the 5 stars. On most levels I seem to get a 4 star on my first or second playthrough, but the temptation to replay it to get that coveted 5 stars is simply too strong. I do still miss the open world, but this game is just as much fun as the original.

This would definitely be in my top games of 2012.

So, I've been playing some more of this game today.

It's really starting to get pretty difficult to get 5 stars now. That's fine. I'm enjoying the challenge.

What's driving me crazy though is the constant chatter by characters and the fact that the game keeps pausing the action to allow the camera to pan to something in the level so that an explanation can be given. I understand why it might be useful to have these things the first time you make your way through a level, but when you're playing it for a 5th or 6th time (trying to improve your speed or attempting different approaches to collecting more water) the last thing you want is for the game to spit out the same redundant text and for it to keep pausing to highlight things that you're already well aware of. I really hate that kind of thing. It drives me mad.

I'm a huge proponent of making games more transparent and easy to comprehend, but game designers really need to stop baking tutorials into the gameplay itself (particularly when the game is focused on time trails or score attack modes, as this requires playing through levels multiple times). The minute Spin Cycle takes away control or interrupts me to tell me something I already know, it makes me want to throw my 3DS out the nearest window. It's Skyward Sword x100.

I think i already posted about it, but 360 levels are to be played while holding 3ds as a plate. It's much better this way. Also these levels have some really cool ideas.

But even with that and on regular tilting levels i find myself a little bit seasick, i just sat on my lunch break and played for 20 minutes or so and my head spins a bit.

I miss metroidvania of the first game though.