The game has the same simple objective as its three predecessors: You must prevent the ‘bloons’ from getting through the stage’s track. Specifically, you must pop these bloons. How, where and when you pop them are completely up to you. You get a set amount of money at the beginning of each stage and gain more with every popped bloon. With this money you can buy weapons such as dart-throwing monkeys, spike balls, ice towers, magicians and ships (among other things). With a simple drag and drop mechanic the game makes prepping for each round a breeze. Every weapon and item can be upgraded either during the stage or beforehand as well, for a price. 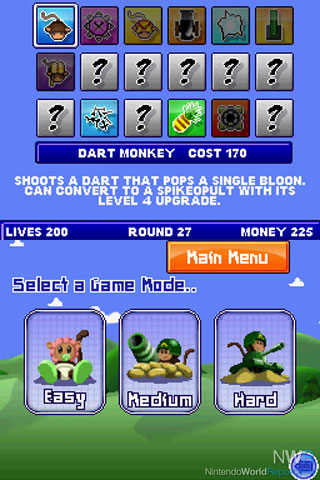 Bloons TD 4 offers 19 different levels, each with 3 difficulty settings. Most of the later stages can only be unlocked by beating the earlier ones. A leveling system carries over from stage to stage the game offering a respectable amount of sustainability. Each weapon can be upgraded three times at the beginning of the game and when a level is gained a new weapon becomes available or a new upgrade becomes ready for purchase. The game plays smoothly and easily, making it very easy to pick up and play. With the autosave feature it’s especially easy to play a quick round or two. A little more time may be needed when playing on higher difficulties, though. Some serious strategy is required when playing on hard mode.

This Bloons game is pretty addictive with its upgradable weapons and seemingly endless levels. It’s not so much about trying to beat a level with a perfect score or a certain amount of lives. The game’s all about using an arsenal any way you want to get to the objective. There’s not just one right answer to this treat. 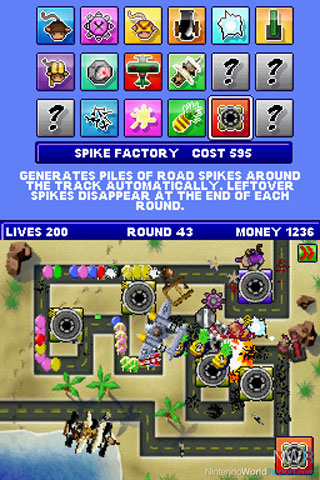 The visuals are fun and simplistic, and the audio is cheerful. Although the popping sound can get annoying, it’s easy to turn it off if you still want to listen to the music.

Unfortunately, in later stages after you’ve beefed up your defense, the game suffers terrible lag. The round will play out but it will be close to impossible to tinker with your defenses mid-level. While this does pose some problems, the lag only shows up when the stage has more weapons going off than bloons on the track. Essentially, playing around with towers mid-level at that point wouldn’t be necessary in most cases.

Overall, Bloons TD 4 is a lot of fun. The lag doesn’t hinder my affection for the game. It’s a game to play when you need to unwind after a long day and pop some mutha’ lovin’ bloons.

The slow down in the flash version is the same. There just isn't enough computing power in a single core that can handle that number of ballons/objects without slowing down. Especially in Flash.