ThunderCats, Hooo-ld on a minute.

The ThunderCats have existed for many years in different forms; most recently they can be found in the animated reboot of the original series. The DS game pulls from the newly animated series, however, the game fails to pull together its different elements into one cohesive experience. The game will at times remind you of an old school brawler and at others a platformer; all of these gameplay elements exist while trying to convey a confusing narrative. 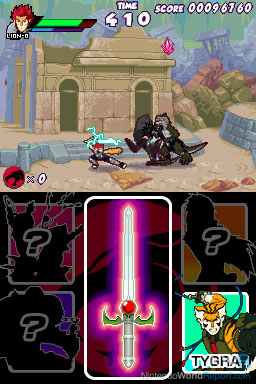 The story of ThunderCats moves along at a brisk pace that left me, someone who is unfamiliar with the source material, confused. The game throws too much at you in the short condensed scenes between the 6 stages for anything to really stick. Without being knowledgeable of the ThunderCats universe I felt the story was inconsequential and that it did not cater towards newcomers of the series.

With the story falling flat, the gameplay must have some redeeming qualities to balance out the title. Unfortunately, bland button mashing and imprecise movement create some huge problems. Your attack is mapped to the A button and is used to take on the waves of enemies that assault you as you move from screen to screen. While there are some variants to attacking - jump then attack/sliding attack - you will mostly find yourself hacking and slashing your way through the baddies.

The few platforming portions of the game were disappointing as well. I first looked at them as something that would change up the gameplay, but they were more frustrating than rewarding. Because of loose jumping mechanics, landing exactly where you wanted was more difficult than expected. What made things worse was when you fell into a bottomless pit, you had to restart the entire stage (no starting back at the beginning of the particular screen.) 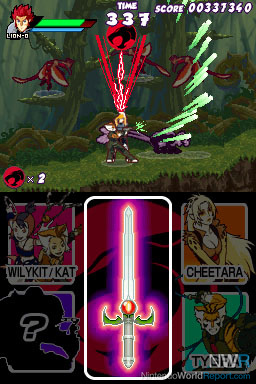 While both of these elements were frustrating to deal with, boss fights made for some more interesting gameplay. During boss fights, the simple beat-em-up method proved unsuccessful. A more tactful strategy had to be implemented to both keep you health up and down the boss. The ability to summon your fellow ThunderCats using tokens collected in the field of play was also an interesting mechanic. Each ThunderCat’s ability was similar, but despite the similarity the system created some strategy by forcing me to properly allocate my ThunderCat tokens.

The music in the game was surprisingly not too bad. The tunes were not very memorable, but could be tolerated. What couldn’t be tolerated was the chant: “ThunderCats, Hooo!” Every time you use the main character’s special attack, summon a ThunderCat, begin a level, or die, the same yell is heard. Seeing how your character’s special attack can be charged every minute or so, the noise is heard far too often and becomes quite an annoyance.

I had initially hoped ThunderCats was going to be one of my last great outings on the DS. Instead I got a game which was far more aggravating than enjoyable. The semi-enjoyable strategy elements needed for boss battles could not make up for the unpolished gameplay and confusing plot. Even though ThunderCats seems to have been a long time coming, the final project wasn’t quite worth it. 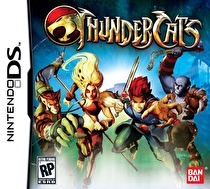