Sequels don't get much better than this.

Skylanders: Spyro’s Adventure was one of the biggest surprises of 2011, critically and commercially. Within a product that looked like a cash grab was a fantastic game with amazing, Gauntlet-style gameplay and unique characters. Skylanders Giants improves that experience, with more depth, difficulty settings, and new features. 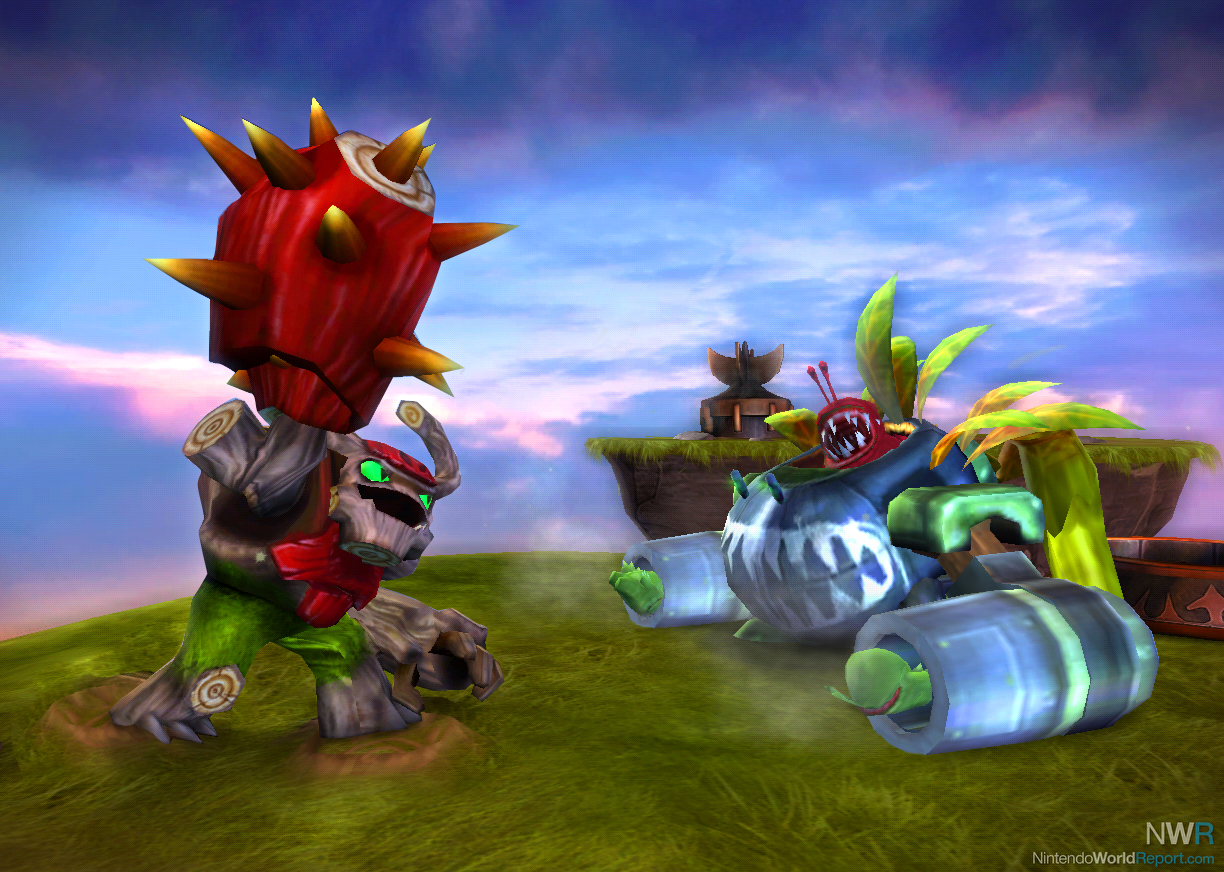 Giants is an ideal sequel, adding more ideas and refining concepts already in place. Aside from its 16-level main story, the game features Heroic Challenges, Arena Battles, and Skystones. Heroic Challenges, short, timed levels, were present in the first game, but Giants uses them with much more creativity. Most of the original ones, which are still playable here, just featured simple “collect X of Y” objectives, while one challenge in Giants was an ice-themed four-lap race.

Arena Battles and Skystones are brand new, though. The former, the closest thing to a horde mode Skylanders has, sends predetermined waves of enemies at you in themed stages. The mode is a great way to test new characters in combat or level up your favorites. Skystones, on the other hand, is a strategic and addictive tile-based card game reminiscent of the card games present in some Final Fantasy games. It’s slow to challenge, but becomes a fantastic diversion from the regular gameplay when it picks up. 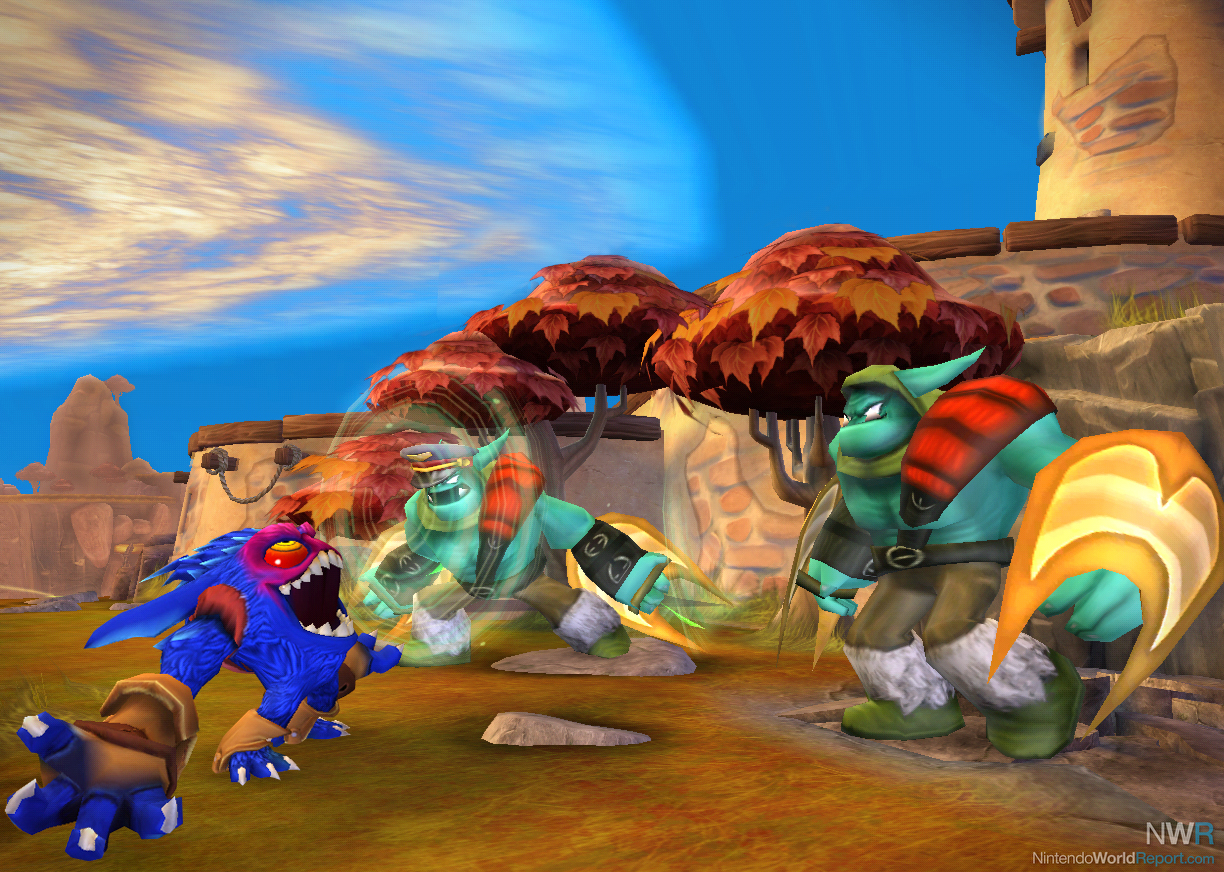 In general, Giants’ levels feel more organic, and feature more interesting themed secret areas for the different elements. The world turns fiery when you enter a Fire element secret area, for example, and in some secret areas, bosses from the first game even ambush you. Outside those nooks, the main levels feature some crazy, awesome gameplay moments; one level features a mechanic similar to the Timeshift stones in Skyward Sword, and another lets you control a giant robot while he fights other giant robots.

The first game was highly replayable, thanks to the 32 available characters (most sold separately), but the second game puts it to shame. Giants has three difficulty settings available from the outset, with a super hard mode unlocked after beating the game once. I haven’t done much in this difficulty, but the normal and hard modes get quite challenging at times. On top of that, Activision will release 16 new characters over the next few months, along with reposes and variants of a majority of the old characters. All the figures (including those from the original series) can also now level up to 15 instead of 10, and the new figures can switch between skill trees. (In Spyro’s Adventure, your character could only commit to one of two different branches.) 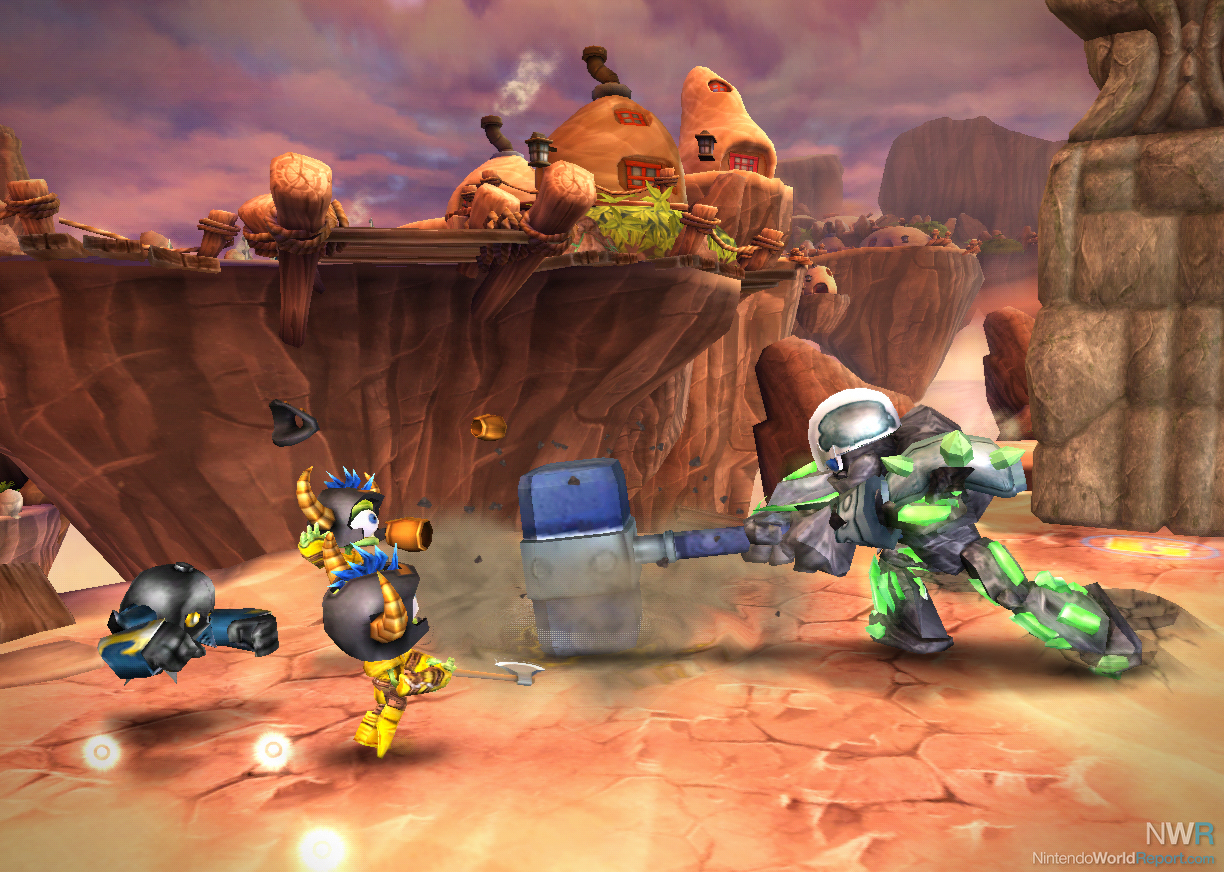 Half the new characters are Giants, generally more powerful creatures that also make for bigger targets, offering a bit of risk/reward. The Giants factor into the story, but outside of breaking down walls and accessing Giant-only secret areas, they don’t add too much to the gameplay.

Giants only offers support for two players, but the co-op is still wonderful fun. Its competitive multiplayer remains exemplary, with a Ring Out mode added to a selection that includes a traditional battle mode, a crystal collection mode, and a completely amazing, football-inspired mode.

Skylanders Giants is a fantastic game regardless of your desire to shell out money for additional characters. Whether you have three figures or 48, this well-designed game is worth the time of kids and adults alike. Don’t scoff at its concept; you shouldn’t miss one of the best Gauntlet-esque games in years.

I've got my Day planned out for Sunday.

Family is loading up into the car at about 7am.
Hit Walmart for new figures since they seem to be cheapest if in town before 7:30am
Drop Wife off at Target or Toys'r'us (TRU) a little before 8am (TRU is opening up at 8 instead of 10 for Skylanders I found out.)
Target Pick up Granite Crusher
TRU Pick up Legendary.  Especially the Awesome Trident Ignitor (A sword he has in the original 3DS version (changes while leveling if you watch) but not necessarily the others)
Already Pre-Ordered the Exclusive from Gamestop(GS) plus the games (which in retrospect probably didn't need to)
See what Best Buy(BB) has (This might be after TRU/Target Considering when GS opens)
Send Son off to Grandparents
Play 3DS Version on the Way home
Play PS3 Version with Wife
Record NFR

If anyone has any specific new Skylander questions, I've had access to:
Tree Rex, Swarm, Crusher, Jet-Vac, Fright Rider, Chill, and Pop Fizz

I think the only ones I need to add from Wave 1 are Bouncer and Shroomboom, but only if I feel like shelling out for the Dragonfire Cannon 3-Pack, which I don't think I do. :/

Are the skills remembered on the NFC chips in the plastic characters, or just saved to a save file on your game system like any other game?

Are the skills remembered on the NFC chips in the plastic characters, or just saved to a save file on your game system like any other game?

It's all on the figure. So, figures from the first game used on Wii can be used on 360, PS3, 3DS, PC, and also in every version of the new game.

3DS Version still totally different then the main game. (If not I'll just cancel mine)

3DS Version still totally different then the main game. (If not I'll just cancel mine)

Yes. We likely will have a review up on launch day; just got it a few days later than the Wii version so we couldn't get them both up at once.

I might have missed it but, since the Series 1 ones can go to level 15 now.  Do they have an extension to there branches?

I might have missed it but, since the Series 1 ones can go to level 15 now.  Do they have an extension to there branches?

Same here. Keep thinking about buying in, but don't have enough cash to collect the way I'd want to. Decided it's easier to avoid than go broke trying to collect something beyond my means.

From what I read in reviews, you can enjoy the game eve with just the starter pack that comes with it. The other figures are basically DLC in away, they expand the game but are not required to beat it or enjoy it.

It's worth noting you'd need at least eight figures to have access to everything in the games, since some secret areas are locked by elemental gates. And there are eight different elements.

Still, those things are gravy compared to the rest of the content the game offers. At worst, you'll just have a few less hats and treasure chests.

Extra characters aren't necessary, but most people will likely want them anyway. I certainly would. Heck, I'd want them all.  That's not a complaint against the game - it's just recognition that my budget and addiction to collecting would make it a bad (financial) decision for me to start.

I just picked up my Skylanders Battle Arena. Anything you can tell us about how it will affect game play?

You mean this thing?: http://www.gamestop.com/collectibles/accessories/skylanders-battle-arena/104096

It's just a neat way to display the portal and some figures.

I use a Mickey Cupcake Stand for my First Series ones when they are all out.  That barely fit them.  I don't know what I'm going to do now.

I know how you feel, the game looks fun but I want nothing to do with the figures. I was hoping that homebrewers could come up with a way around that, but it looks like it isn't possible.

I know how you feel, the game looks fun but I want nothing to do with the figures. I was hoping that homebrewers could come up with a way around that, but it looks like it isn't possible.

It is.  Activision knows it.  They have very actively protected it.

I've got my Day planned out for Sunday.

I have a somewhat similar plan.

Go to Walmart and buy the Wii and 3DS version for the exclusive figure/portals.  Might try to price match TRU if the ad shows the price before the sale.

Go to TRU - pick up my Legendary 3-Pack pre-order and all the figures I can, taking advantage of their Buy-One, Get-One 40% off special combined with the 25% off your entire order coupon I got from TRU in the mail (might try to stack the $10 off $100 I got checking out the other day, but that might be pushing it).

Go to Target and pick up a Granite Crusher.

Check out Best Buy and see if they have anything.

Pick up my Exclusive Battle Pack at Game Stop.

Come home and play with the regular Battle Pack I already got from TRU.com.

I've got the Wii U version pre-ordered on Amazon, and I'm really looking forward to it! 1080p Skylanders is gonna be awesome! The 3DS version will be mine by the end of the year, too (I loved the first 3DS game).

My Sunday should be simple. Get up early. Go try to get Legendary Bouncer at TRU. If not, go to another store and try to get regular Bouncer. Then maybe try to get the Shroomboom 3Pack.

My Wii is shot, so I was thinking about getting the bundle pack then calling Nintendo and hopefully getting all my VC games transfered.
The game looks fun-- I'm concerned about the collection aspect. I don't want to toss tons of money at this game to get all the enjoyment out of it though.. however, if it's like the Lego games, I might be able to get my wife onboard.

Awesome review! Can't wait to try it out with my son. Just bought Skylanders as a Christmas present and now I'm thinking "Hmm, should I perhaps open it straightaway and then give the booster pack for xmas" :-)

Awesome review! Can't wait to try it out with my son. Just bought Skylanders as a Christmas present and now I'm thinking "Hmm, should I perhaps open it straightaway and then give the booster pack for xmas" :-)

From Experience don't do this.  Give it at once.  The extra levels & characters will gnaw at you.