It's considerably more fun than an elbow to the face.

Eight months after the successful launch of WWE All Stars on home consoles, THQ has brought the newest WWE franchise to the Nintendo 3DS. The game includes much of the content which was sold as DLC on the Xbox 360 and PS3 versions of the game (and completely absent on the Wii) in the form of a dozen new characters. With all this additional content, and an engine that scales down nicely to the handheld without sacrificing much in terms of visual flair or gameplay, the 3DS version of the game seems like it might be the ideal release of the game; however there are a few problems which hold this release back.

In most respects, this game is identical to the Wii version. The match types, the venues, and many of the modes are exactly the same. The game plays very similarly to the console version as well, with only a few concessions made to the 3DS control scheme. It's safe to say that if you enjoyed the console version of WWE All Stars, you're going to like the 3DS version of the game as well. The 3D effect adds very little, but overall the game looks great on the handheld, and sounds more or less the same as its console brother.

The game controls with the four face buttons as weak/strong variants of grapple and strike moves, with the shoulder buttons controlling running and reversals.  All of these work just fine, thought the control scheme begins to break down just a bit when the touch control comes into play. The touch screen is split into four quadrants, each representing a wrestler in the game. If you want to change your focus to one of the other wrestlers, simply tap their square to focus on that opponent; if you want to taunt to gain momentum, tap your own square. In theory, this seems easy, but having to glance down and remove your hands from the buttons in such a frantic game can really disconnect you from the experience. I had trouble with matches against more than one opponent, as I would scramble to change my focus when someone would approach me quickly.  It doesn't ruin the experience, but it's certainly not a great implementation.

The single-player component of the game is broken up into multiple modes; some of these are more successful than others. The Path of Champions mode, which seems like the closest thing to a campaign mode, is the least interesting the batch, amounting to a series of seemingly random matches culminating in a championship bout which doesn't seem much different or more challenging than any of the matches leading up to it. Unfortunately, the Path of Champions mode (specifically the Undertaker path) has a bug which will lock up your 3DS if played with certain characters and the 3D turned on after you complete the final match. I reached out to THQ for comment, but received no reply.  It's not a big deal—you can turn the 3D off and proceed as normal—but it's still a concern that this was not caught in play testing.

One of the new modes, Gauntlet, is far more interesting than Path of Champions. In Gauntlet mode you are tasked with defeating every character in the game back-to-back.  Every three or four victories will earn you a reward, such as a health bonus, or an unlockable item or character. In addition, the game automatically saves every few bouts, so if you need a break you can come back later. This mode is where you will unlock most, if not all of the characters that were sold via DLC in the HD version of the game.

Finally, there is the Fantasy Warfare mode, which, like Path of Champions, remains unchanged from the Wii version of the game. This game sets up a series of fantasy matches between current wrestlers and legends, complete with a neat pre-match video package telling the story of who these fighters are. It's a cool mode and gives you a bit of insight into why you should care about any of the wrestlers you may not be familiar with.

The game supports local multiplayer but no online play, which is disappointing.  Wrestling games are known for their fun in a multiplayer setting, but WWE All Stars limits us to playing by ourselves unless we have friends with a 3DS and a copy of the game. This sort of omission is forgivable on the Wii version of the game, where couch co-op is available, but on 3DS it is harder to overlook.

While WWE All Stars is certainly not perfect, it's probably one of the best handheld wrestling games available on a Nintendo platform. The additional power of the system means the conversion from Wii to 3DS is far less jarring than from Wii to DS, and WWE All Stars is a great example of that. If you're a fan of arcade-style wrestling games, or you loved the console version, there's no reason to hesitate picking up this handheld edition. 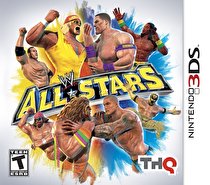