Shin'en's 3DS debut is quite possibly the best-looking 3DS game not made by Nintendo.

Shin’en has developed a reputation for making solid Nintendo games across the retail and download space. With the Nanostray series, they made a pair of superb 2D scrolling shooters for the DS. Nano Assault is the spiritual successor to that series, but it moves the gameplay into 3D, with a mix of Star Fox-esque segments and explorable 3D instances.

The best sections of the game are the latter, which involve you maneuvering around a Super Mario Galaxy-style planetoid, collecting items and shooting down enemies. These are fun, usually intense segments that require you to deftly move around while destroying enemies near each of the cell’s infected regions. The only major hiccups that soil these sections are the controls, which would benefit greatly from a twin-stick Circle Pad Pro-esque setup; you use the Circle Pad to move the ship and the face buttons to fire. It’s not game-breaking, but it can be frustrating at times, especially because the 3D environments have depths and valleys that put you at odd angles. 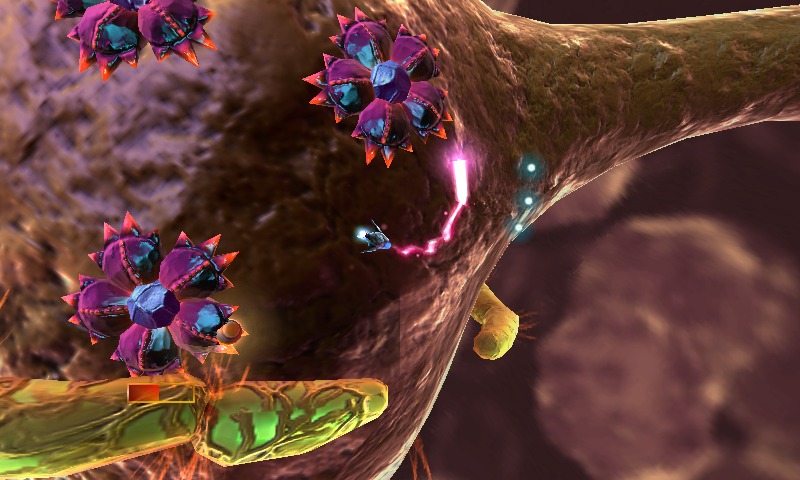 The Star Fox segments are visually stunning in 3D, rivaling the beauty of Nintendo’s own Star Fox 64 remake. However, the fact that you can’t do any kind of barrel roll/dodge maneuver means you’ll spend most of the levels flying around and avoiding fire. It also doesn’t help when there isn’t much reward for engaging the enemies that come at you. If you let them go by, they just disappear.

The bosses are a major highlight of the game, as they are large, somewhat challenging, and generally long, multi-stage affairs. Also, like most other sections of the game, they look awesome in 3D, especially an early boss that attacks you and “bursts” through the screen. The game’s story takes a back seat, but you explore what appears a cellular structure in a minuscule ship as you try to defeat the deadly Nanostray virus. 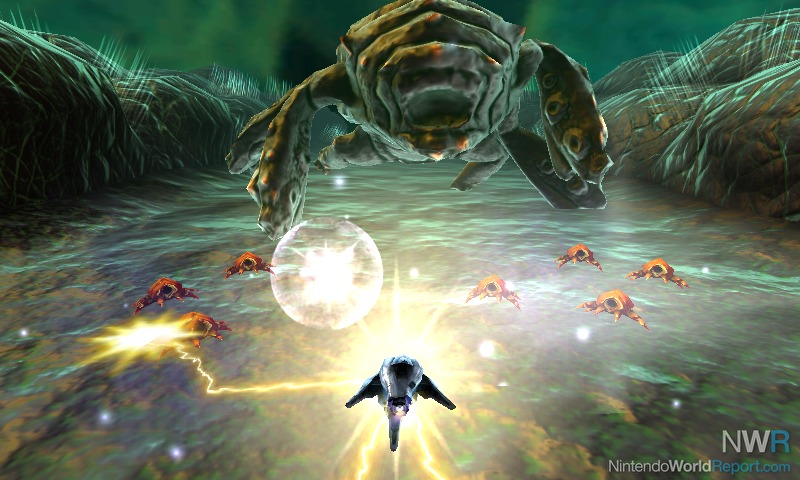 In addition to the 32 levels, you can work your way through Arcade mode, which gives you alternate challenges to clear, high scores to set, and online leaderboards to strive to top, and a Boss Rush mode that pits you against each boss back-to-back. The rest of the unlockables are generally throwaway stuff, such as music, enemy details, and more. Some of this can also be unlocked with the 3DS’ Play Coins.

Nano Assault has enough issues, whether it’s the roughness of the on-rails sections or the face button directional shooting, that it might turn off some players, but if you want some fast-paced and focused shooter action that looks damn fine and can get addictive, Shin’en’s latest is well worth your time.

Nice to know that this turned out good. I quite enjoyed Nanostray 2 so I'll definitely be keeping an eye out for this one when it gets a European release.

I'm not surprised that the game looks great. Having played both Jett Rocket and FAST, Shin'en really knows how to get the most out of the hardware they are working with.

Not sure if I've voiced this before, but I've absolutely had my eye on this game.

I've seen it for $20 at GameStop and have been resisting the purchase simply because I've just received a small glut of games for XMas.

I dunno, I may have to snap this thing up in case it ever becomes hard to find.

I hope it finds a publisher for the European markets. It'd be tragically ironic if the game can't be released in the region where it was actually developed.

Great review!  The bosses really are great in this game, and really the screen shots can not do this game justice it is gorgeous in motion on the 3DS.

Got this game last night.  Played for about half an hour.  Game is amazing.  Visuals are insane.

Get this game or forever regret it!!

Note: Took me a few days to find the game.  It was sold out at two GameStops in New Jersey and one in NY State.  The fourth location sold me their LAST copy.

... frankly, I just don't think they ordered many copies initially.  Very sad how many people will miss out because the game simply isn't on shelves.

I've been playing this a bit (thanks, Neal!) and I agree with the review sentiments. The "twin-stick" portions should have used a Circle Pad + stylus scheme (like e.g. Geometry Wars Galaxies DS). The on-rails parts, which I was especially looking forward to, are a bit too twitchy.  The visuals, of course, are amazing, though the audio falls flat. Still, it's pretty incredible for a 5 man team.