Mama has been around the block, with three DS games, two Wii games, and four spin-offs (including the baby-shaking epic Babysitting Mama). Her fourth mainline portable entry, subtitled Kitchen Magic, is the series’ 3DS debut, and outside of making use of 3D and the system’s controls, it’s not all that different from the predecessors.

That’s not that much of a bad thing, as the quick-paced mini-games are fun, even if some recipes seem to take forever to complete. The game takes real cooking techniques and gamifies them into timing-based games. The touch screen is primarily used to mix ingredients or cut them up with simple swipes. Occasionally, the system’s microphone and gyroscope are used, with the former being annoying and the latter being kind of fun.

The biggest problem with Cooking Mama is that everything feels the same. Yes, you’re using different ingredients to make different dishes, but they all require the same touch screen movements, performed in a similar rhythm. It never truly evolves throughout the 50+ included recipes. Performing these tasks is pretty intuitive (you can practice before you do it for real if you’re worried), but tapping furiously to dice vegetables can only be done so often.

Kitchen Magic does have two other modes, though, that attempt to vary things. One involves picking a previously unlocked recipe to mix with another dish. These are all unlocked at the beginning, and are short mini-games that allow you to make meals such as steak curry or corndog pizza. Additionally, unlockable mini-games, usually based around household chores, are available. They are all forgettable.

Cooking Mama 4 is nothing more than a new iteration of a played out series. This game is for fans of touch screen-based mini-games and references to cooking only. Oddly, despite the term being in the title, there is little actual learning about the craft. For most players, you’re better off skipping this title, as it is just more of the same. 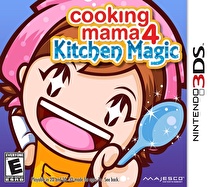