Prepare to samurai yourself for yet another uninspired licensed game.

Power Rangers has been around since the early ‘90s, and consequently the series has been the subject of many video game adaptations, of which Samurai is the latest.

Power Rangers Samurai is a side-scrolling beat 'em up that follows the Rangers as they rid the world of the Nighlok menace. The game is divided into ten missions—each ending in a confrontation with one of the Nighlok bosses. Each mission is introduced with static scenes from the show and text that explains their context. The game’s story is little more than a supplement for the television show. As a result, it feels tacked on and uninteresting.

The gameplay, however, is much better. You are given the choice between six Rangers to play through ten relatively standard beat ‘em up missions, though some missions are locked to certain Rangers due to story constraints. Although each ranger is little more than a re-skin, there are areas in the game that can only be reached by using a certain one’s special attack. Each level is relatively long and filled with numerous enemies. In order to dispatch the enemies, each ranger is equipped with a quick attack, strong attack, two special attacks, and the ability to block and jump. The attacks can be strung together in simple combos by performing a number of quick attacks followed by a strong attack. This gives the combat a level of strategy that it would not have had otherwise. Each level also consists of portals that give the Rangers the ability to run at high speeds, or to jump higher.

Sadly, however, most of Samurai’s standard enemies are introduced in the first mission. Likewise, each mission seems to be set in the same bland forest/warehouse area. The only variety in the game seems to come from its Nighlok bosses, who each have their own unique pattern of attack. However, each Nighlok fight is followed with a Megazord battle that is entirely touch screen controlled. These fights devolve into little more than spinning a disc and pushing onscreen attack and block buttons. At first they’re somewhat enjoyable, but they’re reused after every mission, and they remain the same despite the inclusion of different Megazords.

In the end, Power Rangers Samurai feels more like cash in on the popular series than an attempt at a worthwhile video game. The game does have some interesting mechanics to offer, though, and fans of the show may end up appreciating it more than I was able to if they overlook its lack of enemy and stage variety. 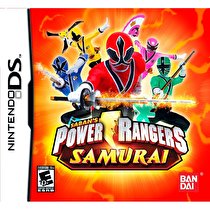