Since 2007, n-Space has developed the Nintendo DS versions of Activision’s wildly popular Call of Duty series. This year they’re back with Call of Duty: Modern Warfare 3: Defiance. And like the rest of their DS titles, n-Space has delivered a graphically impressive experience on limited hardware. However, graphics aren’t important if the game feels like a chore to play.

Modern Warfare 3: Defiance has three single-player modes—campaign, quick play, and challenge mode—as well as local and online multiplayer. Quick play allows you to replay missions from the campaign, while the challenge mode utilizes locales from the campaign for tasks that require you to use certain weapons to get a specific number of kills. Sadly, these modes seem like they were tacked on to lengthen the game’s single-player and to distract from the game’s chore-like campaign.

The campaign acts a companion to the console versions of the game; however, having not played Modern Warfare 3 on a console, I had a hard time caring about what was going on. In fact, the narrative parts only served to get in the way of the action. Nevertheless, the amount of voice acting n-Space squeezed into this game is impressive, as is the sheer attention to detail paid to the guns, character models, and environments.

But sadly, the same attention wasn’t paid to the gameplay. The campaign is plagued with problems that made me want to put it down for good. Stealth sections feel forced, overhead recon missions feel out of place, and the whole campaign feels directed and uninspired. Additionally, despite all the different weapons the games throw at you, you’ll find yourself being forced to follow the game’s objectives with no room for deviation. And to add to this, the game’s controls are less than ideal. Before I could do anything in the game I had to change the touchscreen sensitivity, and even after I set it at a sensible level, the controls never felt comfortable. The button controls felt better, but I had to sacrifice precision.

However, the game’s six-player online multiplayer does make up for a lot of the campaign’s faults. All the padding of the campaign mode has been removed here; what you get is a simple yet fun multiplayer game packed with six different modes. I rarely had difficulty in finding people to play with, and each time I dispatched one of them, I felt a great sense of reward. And while the problems with control are still present in the multiplayer, it became much less noticeable when the game I was playing was actually fun.

Call of Duty: Modern Warfare 3: Defiance isn’t going to win any awards, but as a DS port of a popular franchise, it does a decent job making the experience portable. If you can ignore the game’s bland campaign and uncomfortable controls, Defiance is a decent multiplayer experience for system that isn’t known for its online.

This illustrates perfectly why the dual analog addon for the 3DS is essential. When COD games start appearing on the 3DS it will be necessary that they have dual analog control.

I prefer the stylus touch screen aiming controls, but i admitt, most people dont get how
to hold the DS even, 6 yrs later.
I personally, was hoping Activision would get their head outta there butts and give
us a 3DS version, but Oh well.
As for the slide pad, yea, include it in the revision, and a slightly bigger screen please
(love my XL) .  My favorite way to play FPS's is PC(mouse), then DS(stylus) then Wii(remote)
then dual anolog.  This is why.    http://www.youtube.com/user/kenznign2#p/a/u/0/mTkivixb-II
It works better for DS/DSi (XL)  the metal 3DS is slippery.  :(

Mop it upNovember 23, 2011
Quote from: NintendoFanboy

I prefer the stylus touch screen aiming controls, but i admitt, most people dont get how
to hold the DS even, 6 yrs later.

If Nintendo still included a thumb nub then it wouldn't be an issue.

The thumb nub never worked for me. But the two finger stylus thing does.
But, here is hoping for Dual anolog slide pad support for next years CoD

I quickly stopped using the thumb nub because it was easier and more accurate to use the stylus or my finger.

The nub was extremely useful in games that used a virtual analog stick on the touch screen, and rarely ever useful outside of that. I think Nintendo stopped packing them in once it became clear that very few games used the touch screen that way.

Unfortunately 3ds was not popluar at this time when mw3 came out. If they made the graphics on the 3ds, it would be twice as good. Even better, you would have better control of aim and movement, like that of Metal Gear Solid: Snake Eater 3D 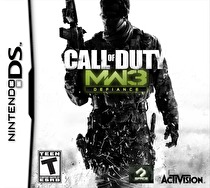