Phineas and Ferb: Across the 2nd Dimension

A game like Phineas and Ferb: Across the 2nd Dimension has certain expectations of it, and those expectations aren’t positive. Here, we have a game designed for multiple platforms, based on a cartoon movie, and made primarily for kids, which, in the post-16-bit era, don’t typically come together well enough to make a game of the highest value or production. As much as I wanted to review this game with an open and unbiased approach, I can’t deny that these thoughts were resting somewhere in the back of my mind. Surprisingly, and thankfully so, my misgivings were shooed away in a hurry.

The game is based on the recently released Disney Channel movie, which in turn is based on the hit TV show. The TV adventures of Phineas and Ferb have captured the attention of both kids and adults alike thanks to a heavy helping of sharp writing and indelible wit, and those elements of the show are on full display here in the game. You are tasked with getting the brothers and company back to their correct dimension after they jumped to a parallel world in order to defeat the bizarro-version of their main nemesis, Dr. Doofenshmirtz. An animated music video of sorts catches you up with the plot right away, as a song breaks down the events thus far while scenes from the movie play. After that, in-game cut scenes pop up every couple of levels to add a little more to the rather simple plot. These moments of exposition are wonderfully acted and written, and the charm of the show is undeniable, even to someone like me, who hasn’t seen much of the series to this point. 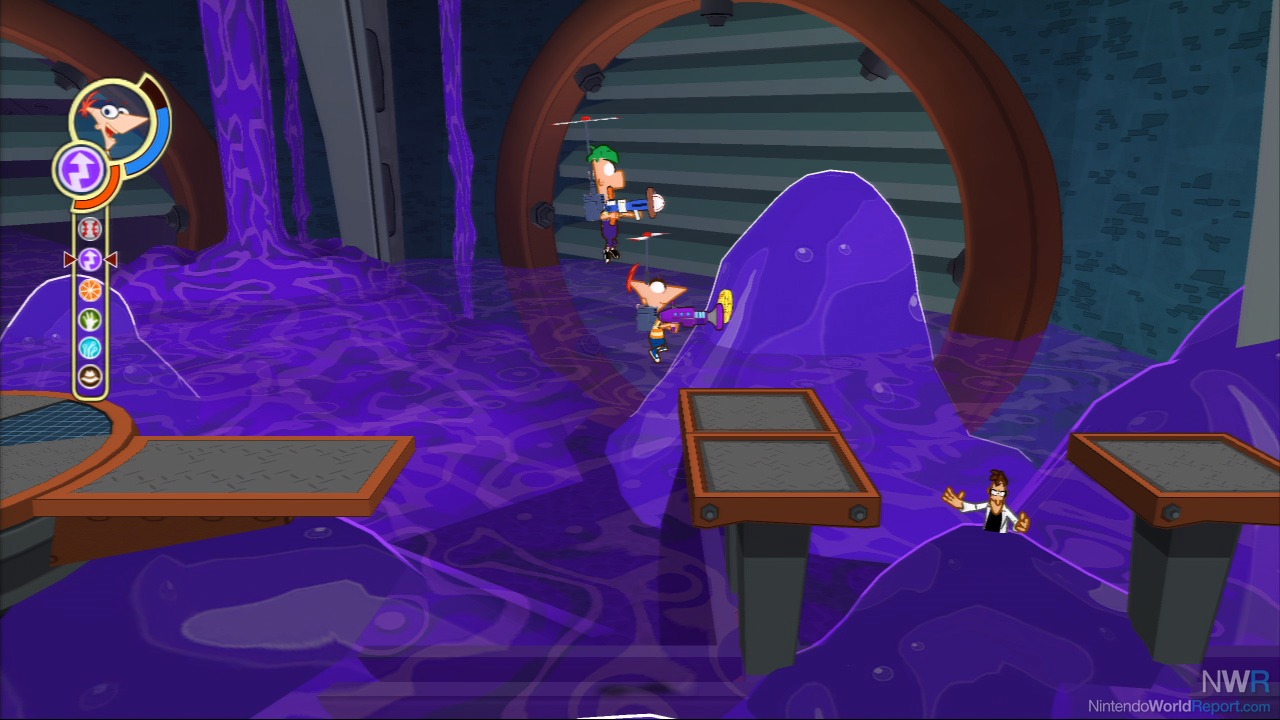 The task at hand is to get through six dimensions, each made up of four to five levels, while collecting energy sources to power the device that can get the brothers home. There are essentially three types of levels: platformers, on-rails shooters, and boss battles. The platforming stages actually play out a lot like the recent Lego games, particularly the Harry Potter one. Two characters traverse a landscape while destroying everything imaginable and collecting a bunch of items, such as electronics, chips, and gold tokens. Every now and then, a roadblock will pop up and require either solving a puzzle or finding the parts to build an invention. The puzzles usually involve raising and lowering platforms to reach new areas or redirecting lasers to activate switches. Meanwhile, putting together inventions means finding two-to-four glowing items in the general area, and then combining them to make something that allows further progression, such as a catapult or a battery for a broken down vehicle.  These tasks aren’t overly complex, and they should provide just the right challenge for kids.

Alternatively, the on-rails stages launch the characters into the sky as they fly around with their jetpacks and shoot down enemy robots. Players have a blaster with infinite ammo as well as the ability to earn firecrackers and build up a special attack meter that can unleash a powerful laser for a limited time. I’m especially fond of the laser, as it requires the two characters to stay close together and move harmoniously. Essentially, the brothers are “crossing the streams,” and if they move far apart or don’t communicate, the attack won’t work or will be wasted. It seems like a great way to get kids to play together and think cooperatively. 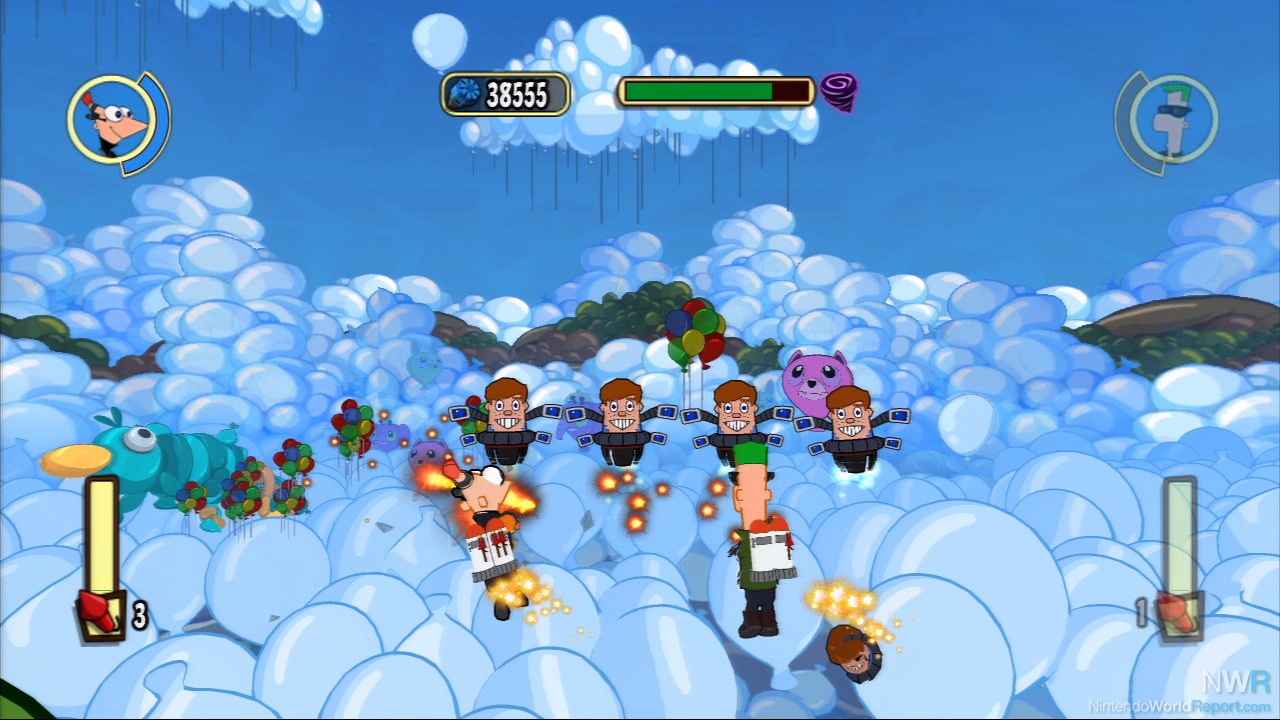 Finally, the boss stages usually involve some bit of puzzle solving in order to succeed. You may need to use a boss’ power against him, or stun him before you can attack. It’s all pretty simple pattern-recognition, but again, it should be just the right amount of challenge for kids.

In fact, not only is the challenge appropriate for kids, but in a lot of ways, Phineas and Ferb is the perfect way to introduce kids to a variety of video game tropes. Weapons can be upgraded with chips discovered in the levels to increase damage, improve recharge rate, speed up rate of fire, etc. Yet, to open up new slots for chips, weapons must be used enough to level up, with each having a maximum of four levels to achieve. That’s right: this is a kids game that features leveling and upgrading weapons. When weapons do level up, the action stops and a big colorful screen pops up letting the player know that a weapon has advanced. It slows down the action a bit and can be a little annoying, but in the context of making sure kids know about the leveling system and explore it, this decision is genius. What kid is going to notice a small bit of text in the corner or a little “ding” sound? I approve of this.

Meanwhile, there are also achievements, quick-time events, terminal-hacking mini-games, wall jumps, and more, all introduced harmlessly and effortlessly. Again, this game is a great introduction to the common elements of games today. Oh, but fret not adults and parents, there are plenty of little nods to you, as well. One dimension you visit is black and white and “old timey” as the brothers point out. You’ll need to cross a river, and to do so, you board a steamboat named “Willie,” which, Doofenshmirtz points out, seems oddly nostalgic. An upbeat piano track accompanies this area, which even features cows with long legs and huge eyes, a clear tribute to the Disney cartoons of yore. In the terminal-hacking mini-game, the brothers are transported to a Tron-like plane where they must protect nodes from sprite-based enemies that sort of resemble the viruses from Dr. Mario, while the music transforms into this great chiptune theme. Much like the show, there are these elements that are aimed directly at the adults sitting alongside their kids. 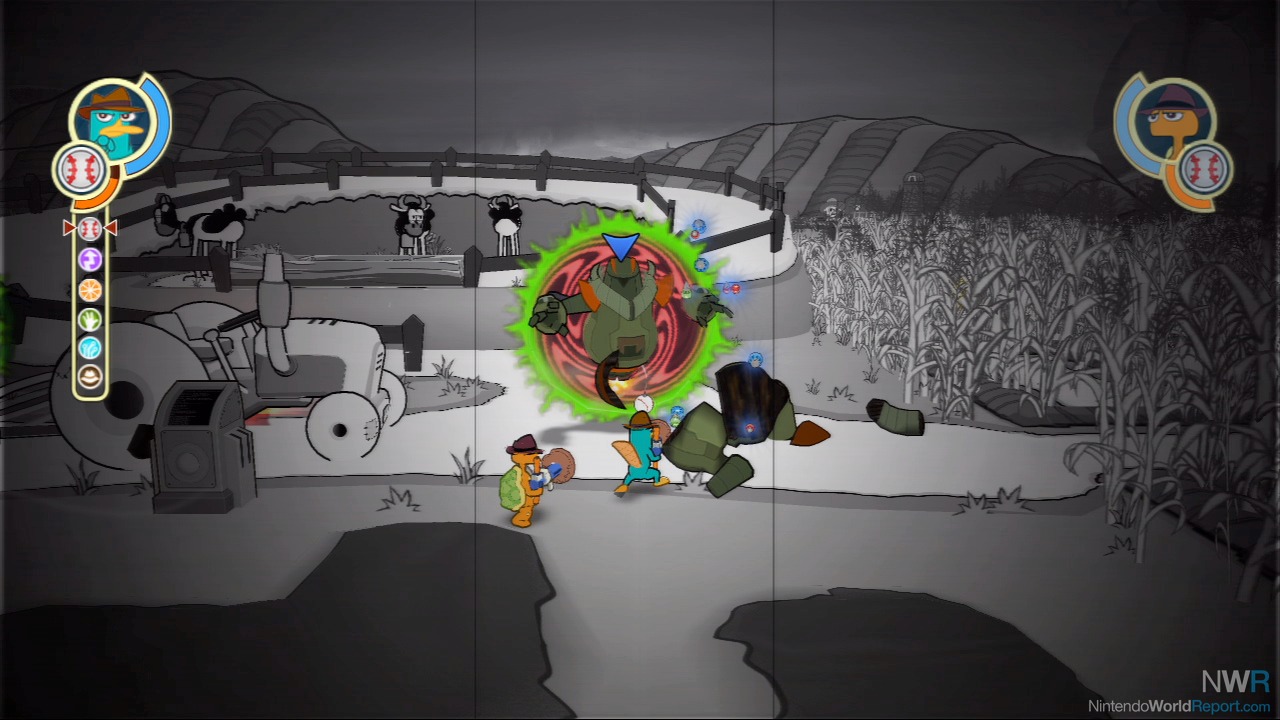 There are a few little shortcomings here and there that don’t detract from the game too much, but do deserve mentioning. During the game, the brothers will spout one-liners that, as expected, do tend to get repeated a bit much. Also, it can be hard to attack enemies with your weapons when they get in real close to you, meaning you’ll have to rely on a waggle-based gesture to knock them away, though even this attack doesn’t work that well all the time. Lastly, though the game is very clean and evokes the look of the cartoon, there are some ugly textures as well as moments of the framerate stuttering that will definitely catch your attention.

Overall, though, Phineas and Ferb: Across the 2nd Dimension is a wonderfully executed children’s game. If you have kids who are fond of the show, this game is a no-brainer. The co-op mode is great, there is no penalty for dying, and the bright and colorful worlds look, for the most part, sharp. The full voice cast is present and the writing is as intelligent as the show. While it may be a breeze for adults, I suspect you diehard Phineas and Ferb fans will get some enjoyment out of it, too, though it won’t take you more than five or so hours to get through it.

Disney, and the studios they work with, seem to be getting better with their games.
Cars 2: The Video Game seemed to be received well, and now Phineas and Ferb.


I haven't played the game, but I am definitely interested in it, as we really enjoy the show in our house.
We started watching it when we were looking for cartoons/shows for our two year old son, and have watched every episode(some MULTIPLE times) that's available on Netflix.

You should definitely think about picking this up, then. At two, he might be a little young to really play the game, but with the cutscenes, one liners, and bright levels and characters, I bet he'd love watching his parents play! There's a skeeball minigame too, that works a lot like Wii Bowling. Maybe he could do those parts for you guys. Then everyone gets involved!

Interesting.  My wife and I finished Kirby's Epic Yarn last week, but our son still says, "Kirby watch.", meaning he wants to "watch" the game...the fact Kirby turns into a car helps a lot also!
When he wants to watch Phineas and Ferb, he says, "Ferb watch.", so I could see it happening with the game also.


Thanks for the feedback!

P&F looks fun. Might pick it up.
What are the controls like in the on-rails parts? Getting a Sin and Punishment 2 vibe there. Is it nunchuk for movement and pointer for shooting or just nunchuk for both movement and shooting?

Nah, there's no IR aiming. The characters just shoot straight ahead, so you move them in front of enemies. These stages shouldn't really be the selling point, either; they are suitable for kids, but are very easy. They are a nice break up in the action and let you do something different, but aren't all that remarkable otherwise. The platforming stages, which make up the bulk of them game, are where it's at.