Cubic Ninja, from AQ Interactive, is a really cool idea on paper. It's a platformer based on depth, with your blocky hero moving side-to-side and back-to-front. His positioning is highlighted by the stereoscopic 3D, and also revealed by the shapes and size of obstacles and such.

The only problem with this is that the game is not actually designed to take advantage of the 3D. Instead, it's designed to use the 3DS gyroscope controls, as the default settings turn off the 3D and force you to use the system to move your block around. This provides an excuse for the game to control sluggishly and make most levels be either a joke or incredibly frustrating.

At first, the gyro controls are kind of novel. You slide your character around the screen by tilting the system side-to-side. When you initially tilt the system forward and backward to slide the block creature to the foreground and background, it's a nice "a-ha!" moment. Sadly, that's the last such moment in Cubic Ninja. From there on, the motion controls become nothing more than a nuisance, as moving the system around makes the gameplay hard to follow. You'll find yourself in numerous precarious scenarios that are very tough to pass through comfortably. 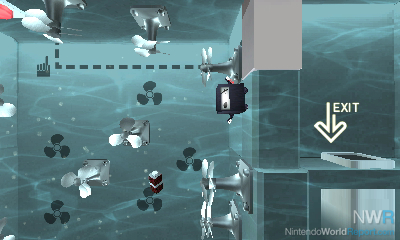 Tucked away in the menu is an option to turn on a mode that uses the Circle Pad to control your character. This mode also uses the 3D, which actually works quite well to stress the depth. This makes the game easier, but you'll soon realize that it wasn't designed to be played with the Circle Pad, and it becomes extremely easy, to the point of it being uninspired and boring. Throw in the fact that the Circle Pad controls are outrageously convoluted: to go between the foreground and background, you have to hold the X button, but there doesn't seem to any kind of finesse with getting to the middle ground. You either go all the way to back or all the way to front.

There are 100 levels to slog through, as well as a time attack, survival, and level creator. These are only interesting in the fact that you can share your time attack ghost or the levels you create with friends using QR codes. The level creator is oddly reminiscent of the Excitebike stage creator. It's not quite as obtuse as the Excitebike one, but it's an oddly complicated creator for something with such basic general level design. If you get into the creator, you could design some devious levels, but when you're making the levels yourself, the joy of discovering a new, well-designed level is lost. The only way it'd be fun is if a large Cubic Ninja community made a website to share QR codes for levels. 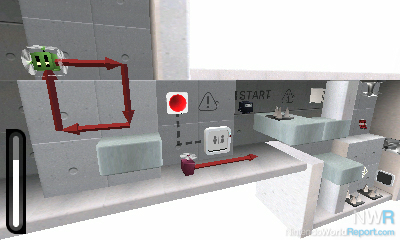 Cubic Ninja is, sadly, a disappointment. The focus on gyroscope controls limits the game's level design and makes it awkward and boring for players who use the Circle Pad. With the aid of the level creator, better levels can be made, but the controls are still bad. Unless you're absolutely starved for 3DS games, this is not a game worth experiencing.

I'm thinking Gyroscope controls was a mistake on Nintendo part.  Should have been one or the other but not both.

I had high hopes from this game, too bad it was a disappointment

Aw man, I just got a 20 buck credit from Amazon for buying Ocarina, and this is one of the few choices I have to spend it on.  Now it's down to Nintendogs, Blaz Blue, or Ghost Recon.  Ghost Recon is tempting....but are they / can they fix the bugs? 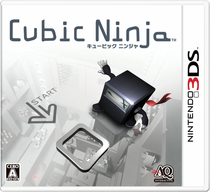