Just like Sam Fisher, this game is hard to see.

I’ve always wanted to try the Splinter Cell games. In particular, I wanted to play the third game in the series—Chaos Theory—because it was universally lauded, grounded (somewhat) in reality, had some really interesting multiplayer modes, and seemed to fix a lot of the things I didn’t love about the Metal Gear Solid games. Exactly why I never just ran out and bought a cheap copy, we’ll never know. As it turns out, the game’s been down-ported to the 3DS as a launch window game. Does Splinter Cell 3D sell me on the series? Kind of, though it really just makes me want to run out and find the PS2 original, as it’s clear this is not how Splinter Cell was meant to be played.

First things first: players hoping for a full port of Chaos Theory will be disappointed to know that this 3DS game only has the single-player campaign mode, and nothing else. No co-op and no multiplayer exist here, so you’re not really getting the full game. The second disappointment is that the 3DS doesn’t have the comfort factor or button configuration that, I assume, made Chaos Theory playable on the PS2. Here, many of the game’s controls are mapped to the touch screen, including weapon swapping, ammo selection, night vision, and Sam Fisher’s “scan visor.” Whenever you have in-game options—like before you open a door—you have to select it on the touch screen. The Circle Pad is used for movement, and the camera is unfortunately controlled by the face  buttons, which is never ideal. Worse, when you tap a gun on the touch screen, Sam goes into aiming mode (yes, he can strafe) and you suddenly have to aim with the face buttons, which is never precise and takes way too long to set up a shot. Some other movements, like hugging the wall or jumping, are unfortunately mapped to the D-pad. Because of this, it is actually impossible to jump forward.

The camera is also far too restrictive. I don’t know if it was like this on the original game, but in Splinter Cell 3D, it hugs Sam’s back, and whenever the room is restricted (which is often) it closes in even tighter, sometimes going into a pseudo-first-person viewpoint just because it has nowhere else to go. Because of this, your field of vision is just terrible, and you have to spend a few seconds manhandling the camera before going forward in many areas just to find out if any bad guys are going to see you. The slug-like aiming means that very often, if an off-screen enemy sees you, your best bet is to run toward him and stab, because you just don’t have the ability to aim quickly. More often than not, being seen means that Sam will be killed. And the checkpoints aren’t always great.

The core gameplay is actually fairly interesting. Sam sneaks around using shadows and ambient noise, shooting people in the head, hiding bodies, and/or giving judo chops to the neck. One new element, borrowed from the most recent console Splinter Cell games, is the presence of words superimposed on the environments telling you what to do next. It’s a nice touch, but it’s inconsistently used.

One of Sam’s goggle settings paints the environment in blacks and whites—objects you can interact with are white while everything else is grey and black. I found myself using this setting for most of my playtime because the game is naturally so dark. Splinter Cell 3D is in a sort of Castlevania: Circle of the Moon position: unless you’re playing it in the ideal lighting circumstances, you won’t really see what’s going on.

The graphics are pretty nice, though nothing really stands out because Sam is sneaking around in the shadows. The production values are high, however; There are a lot of voice acting and pre-mission cut scenes in this game. I daresay there’s almost too much information during pre-mission briefings—a gaggle of talking heads tell you information you may or may not care about. Unfortunately, for all this pre-mission chatter, there doesn’t appear to be a Codec parallel, so if you need some help during the mission—for example, where do I go from here?—you’re out of luck.

As in any 3DS game, Splinter Cell 3D has a 3D effect, though it’s not particularly engaging. It is never actually useful and serves only to make the visuals “pop” a bit more. However, the game is just as playable (or, as I’ve been saying, “unplayable”) without the 3D effect, and I’ve been turning it off completely with no drop in enjoyment.

I didn’t really care for Splinter Cell 3D, but for once it’s not really the game’s fault—it’s the developer’s fault for trying to cram a control scheme onto a system not designed for it, and the fact that you can’t really see what you’re doing half the time. The exclusion of all multiplayer is disappointing too, as that was one facet of Chaos Theory I was really looking forward to trying. If you’d like to play Chaos Theory (as I still would), run out and get it on the PS2—the console it was built to run on.

I think that they should have mapped the camera to the touch screen. It's sad to say, but Chaos Theory for the DS is better. 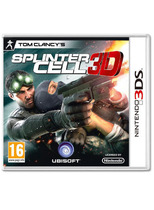