By now, most people have played some version of The Sims. The game is on its third iteration, and has hit almost every platform that supports video gaming. The series is as ubiquitous as it is successful, and now for the first time, it is in 3D. The Sims 3 is a launch title on Nintendo 3DS, but unfortunately, it doesn't contain much of the formula that made the original such an outstanding success.

The Sims 3 is a human simulator. You take control of a simulated person, and help them get a job, keep a clean house, buy new and cool stuff, date other people, and eventually get married and have children. The game can be overwhelming with all of the ways your Sim can become unhappy or unhealthy, and thus the game has become known on its native platform, the PC, for letting players use cheat codes to bypass the challenge of the game and get down to being creative. Regrettably, no such cheat codes were available to me as I played the game, and thus I played the game as intended. 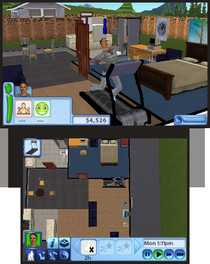 When you first load the game, after sitting through some unpleasant load times, you create your Sim. There are no modes to choose from, as the game only contains a free-play mode that progresses in the same manner that the main campaign mode does in most versions of The Sims. Creating your Sim can be fun, as the game allows you to use the camera to create a Sim that looks like you (a feature that didn't work very well for me). There are also plenty of style and clothing options to choose from.

Once you've created your Sim, you can choose which house to move into, keeping your budget in mind, and what career path you'd like to pursue. After these choices, the game begins in earnest, and sadly, the fun ends. The game is extremely challenging, giving you a ton of metric information about your Sims desires, goals, skills, relationships, and finances, but making it very difficult to find basic information like "how sleepy is my Sim?" or "What do I need to do to get promoted at work?"  I also had problems finding ways to contact a repair person to fix my Sim’s broken computer and sink (both of which broke frequently), or a maid service to clean my house. These are things that helped make the game easier to play on the PC, but don't seem to exist in the 3DS game.

The Sims 3 seems to want to keep as much of the PC game as possible in the translation to the handheld experience, but the interface is so loaded with various icons that, despite the tutorial mode, it's very difficult to know where to begin. The icons in the game are so tiny that you will often miss them, and wonder if they were really items in the game or merely artwork. As the game is simultaneously broadcast to you from two different perspectives (top down on the touch screen, full camera on the 3D screen), you will have to spend time piecing together how the perspectives fit together. 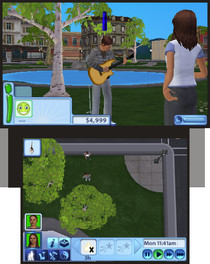 The game includes the ability to trade your Sims via StreetPass mode, but as I never encountered another The Sims player, it was hard to know how well that works. In addition, the 3D display does very little to make the game more immersive, especially since most of your attention will be focused on the touch screen as you play. Occasionally zooming in on the top screen nets you a nice view of your Sim trying to cook dinner or flirt with a neighbor, but it's only there for a bit of eye candy. The graphics aren't good enough most of the time to make that eye candy particularly rewarding.

The Sims 3 is not an awful game; it's merely not well suited in its current form for the handheld. A few different modes that allow you more creative freedom to build a house and explore the Sims world would have done wonders for the game. The Sims has never been an easy game to succeed at, but at least it's been easy to understand how to play. On the 3DS, both aspects are too difficult.

I don't know how the games play on PC, but I played this at GDC, and it was a terrible, unintuitive mess.

The Sims 3 plays primarily like the previous two installments on the PC. The only noticeable difference is the terrible "real-time" world, where everything happens in your neighborhood regardless of whether or not you're playing the other families. It's a step down from The Sims 2 in a lot of ways. Of course, having to buy an expansion pack or "stuff pack" every three months, with crappy digital downloads in between is pretty ridiculous in itself.

The Sims franchise has always been a mess outside of the PC. It failing on a handheld comes as no real surprise. 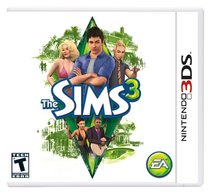