Has Monkey Ball become this bad?

The first console Super Monkey Ball on GameCube was a revelation. The single-player puzzles were a test of precision and skill, and the multiplayer games were great fun in a party setting. Unfortunately, Sega's latest entry in the Super Monkey Ball series, Super Monkey Ball 3D, doesn't have well-designed puzzles, and the periphery modes, limited to racing and a pitiful Smash Bros. rip-off, aren't fun.

The standard monkey-in-ball rolling levels are split up into eight worlds containing 10 levels each. The bite-sized worlds are great for a portable setting, but unfortunately, the design of these levels is either insulting easy or awful. Instead of being based on skill, they're based on avoiding or dealing with inconveniently placed obstacles, such as patches of sand, that slow the game down. Every so often, there is a clever level that is reminiscent of the original well-designed Monkey Ball levels, but it's not worth slogging through the other levels to get to them. The difficulty, for the most part, is low, though the final worlds do pick up.

Fortunately, the controls work well for this mode. The Circle Pad continues to prove its worth as an analog stick replacement, and even the motion controls, which make use of the system's gyroscope, work well, though they make the game a lot harder.

The other two modes, Monkey Race and Monkey Fight, are new twists on old modes from previous games. Monkey Race is similar to Mario Kart, with a variety of characters, karts, and races to choose from. The controls for this mode are baffling. To drift, you have to brake with the B button to skid, and then hold the R button to spin around in a circle and charge your boost. Not only is it awkward, it just doesn't make sense.

Furthermore, the items in this mode echo the obstacles in the main game. All they do is slow you down. There's the disco ball that brings your character to a dead stop, and the 3D glasses that take up the entire screen and make it impossible to look at the road. It's just poor design, and this mode, even with the local and single-card multiplayer, isn't worth being a Mario Kart stand-in until Nintendo releases their 3DS version. You're better off playing Mario Kart DS again.

Monkey Fight is a piss-poor Smash Bros. clone, complete with Final Smash-esque attacks. Instead of knocking rivals off the stage for victory, it's focused on collecting bananas. The combat feels sluggish and the controls are unresponsive. Also, it's too chaotic to keep track of the bananas on screen and who collects them. Like Monkey Race, it features four-player local multiplayer, but also like the other mode, it's not worth your time.

Super Monkey Ball 3D is a mess. Sega appears to have forgotten how to make a good Monkey Ball game. The puzzle levels are uninteresting, and the two multiplayer modes are extremely poor rip-offs of Mario Kart and Super Smash Bros. I can't recommend this game for anyone.

Thank you so much for this review! I was on the fence about picking this game up with Ghost Recon later next month but haven't read any impressions or other reviews of the game.  It's sad that the game turned out the way it did.  It's a real missed opportunity for Sega and of all the complaints about ports and such for 3DS's launch, I really wish they would have just ported the GCN original.

Neal you deserve a medal for all these reviews .  THANKS

I'm going to sit down and try to finish more of thus game tonight but, I have to disagree on parts of this.  I thought the gyro controls are easier.  The difficulty is easier but the level design itself I do not feel is much different then other Monkey Balls.  If I have another Monkey ball in the house I'll play some of that, I know Wii I played through on a rental.  I still end up giving it a 5-6 because the mini-games are underwhelming and the sand is annoying.

I think this game is horrible, and the level design is miserable compared to Super Monkey Ball 1. The game, like Cubic Ninja, was seemingly made for the gyro controls, and thus, with the Circle Pad, the game is a shell of what it could have been. I hate this game.

To be honest every Monkey Ball after 1 is not as good.
Sega should have just ported 1 to the 3DS, make the multiplayer single cart, added some effect like Mario Kart for going really fast, and call it a day.  I do think the 3D effect naturally lends itself to this game.

The second one wasn't any worse for wear. Some of the added mini-games were fun, and the single-player was still good.

The second one wasn't any worse for wear. Some of the added mini-games were fun, and the single-player was still good.

As I said I wasn't really into the Mini-Games.  That being said the Second one I think the single-player mode wasn't as good as the first but still good but, I think the added Mini-games made up for it for most people.

I do think the 3DS can be an excellent platform, if not one of the best platforms, for Monkey Ball but, they need to realize the talent to make one from scratch is not longer really their and just port the GameCube ones.  Also why didn't they put the overview map on the touchscreen portion?  That would have been a great usage of that screen.

I just don't think the game is as bad as:

Though SPRay conceptually does sound like it had a lot of potential if it could have had Portal level of stages.  That's just not a concept that is really kid friendly if you want a stellar game.

Reading more of your reviews at this rating level and what your wrote I feel it fits closes with what you wrote for Tony Hawk: Ride, I also think Cubic Ninja is around their as well.  I guess in the end from what you wrote I feel the game should have been around a 4 to be more in line with your other reviews.

Which is my own opinion on the matter which is all the Game Reviews and the Stock Market really is at the end of the day.

Supposedly, you cannot delete the save data on this game either.  Is that true, and if so, why doesn't this review make a big deal out of it? :D

Supposedly, you cannot delete the save data on this game either.  Is that true, and if so, why doesn't this review make a big deal out of it? :D

Secretly that's why the game received a 3 instead of a 4 but, it was done by Neal's subconscious so he didn't even know.

Edit to not Make another Post:
Just read your latest 3 3DS review, Transformers: Dark of the Moon Stealth Force Edition 3D.  Yeah, I have to disagree with you on giving that game a 3 if this is the 3 standard that should have been a 1.5-2 but, at least this one your are still a Monkey in a Ball, still have ok levels just not great, and to few minigames.  Your not fighting the Camera all the time and the Analog controls aren't bad and some people will like the Gyro.

@Ceric - I wrote the two reviews you first cited more than two and a half years ago. That's not a fair comparison. Don't judge review scores by other games given that score. Judge them by the text. There is no such thing as a standard score. There is no science to game reviews. It's all opinion. You're entitled to have your positive opinion, and I'm entitled to have my negative opinion. We can also bicker about this all we want.

@UncleBob - 1) Read my RE: Mercs review. I don't mention it there either. 2) This game doesn't mention it in the manual, and the fact it doesn't have that feature wasn't discovered initially (people had to call Sega to find out). Also, this game is awful. 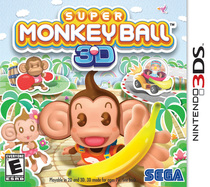