Anybody who owned a PC during the 1990s probably played, at least accidentally, Jellyvision’s excellent You Don’t Know Jack series. Extremely simplistic, the game was basically nothing but text—all the presentation came from the funny, enthusiastic hosts and unique question types. At its core, YDKJ is a simplistic trivia game with a layer of pop-culture comparison.

For example, one question might be: “Say the Duke boys are trying to outrun Sheriff Coltrane in the General Lee (what else is new?). Bo gets the great idea to jump their car over the United States’ widest canyon to make sure Boss Hogg’s lawmen can’t catch them. What canyon is he talking about?”

The possible answers would be a list of four canyons, and the correct answer would be the widest of them. Players are verbally scolded for wrong answers and usually praised for right answers. Money is awarded based on how much time is remaining on the clock in this version of You Don’t Know Jack. To break up the tedium, the game usually throws one unique question type into each round; one type, “Dis or Dat,” has the losing player attempting to discern two similar-sounding things. For example, what words are the names of Popes or Britney Spears songs (seriously). Another question type has players attempting to decode a fortune cookie fortune, and a third involves a poorly voiced marionette. After 10 questions divided into two rounds, the final question—the Jack Attack—is revealed. It’s a word association game in which players must use a starting clue to determine which associations are correct.

The game is incredibly simple, but that’s part of the charm. No version of You Don’t Know Jack has ever been anything but text-based. The most visually complex edition was You Don’t Know Jack: The Ride, but to even say that game had graphics was pushing the definition of that term. What made people keep coming back? Simply put, the wonderful writing and hilarious delivery of the host, most often Tom Gottlieb, who returns in this game as Cookie Masterson.

The DS version has a few flaws that keep it from being incredible. First, it’s disappointing that the game is divided into distinct episodes, each with a unique set of questions. This limits the replay value, but not by too much, as there are 37 episodes. Previous versions of the game usually pulled random questions. There is no online play at all; instead, there is only two-player co-op. You’ll want to play with the sound as high as possible with two people, but it still sounds a little tinny unless you decide to share a pair of headphones with your friend. They don’t alternate question types often, partially because there are only 11 question total (including the Jack Attack) per episode.

For a couple of friends on the go (it’s really best to play with a friend), This game is pretty tough to beat if you like trivia games, or are just a fan of the series. While the limited number of episodes is kind of a drag, it’s not like you’ll be finished in an afternoon. Give it a shot, and remember: You don’t know Jack!

The console versions have around 70 episodes.

Loved this game on PC back in middle/high school.  Oooh, to have friends over again just to eat hostess products, shoot hoops, and play video games.  Damn you, real life.

The video I have seen (of the Xbox 360 version, but I assume the Wii version is the same) does look pretty fun. My only concern is that none of my friends play video games, so I always have to decide if I will have fun playing a game with the computer.

I played the older PC games in the late 90's - still have them, in fact - and I get the feeling I would miss the randomization of the questions. The Wii version is slightly less than the games I have but it would run out of steam pretty quickly in a Gamefly rental or what have you. That and the $4k Jack Attack. F that. 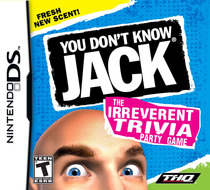