There have been quite a few versions of Monopoly released on many digital platforms, such as the DS and iPad. With the original game over a century old, it is surprising to see Electronic Arts release another iteration of Monopoly for the Wii.

The title 'Monopoly Streets' represents the game's new board that takes place in the city. This board plays exactly like any other board except it has quite a bit more detail. Each player is given their own skyscraper in the middle of the board that represents the total worth of that player. If a player goes bankrupt, the structure reflects that in the game.

Monopoly Streets follows the basic concept of the board game. Players take turns rolling the dice and moving their character around the board. Anyone who lands on an unknown property or utility is given the opportunity to purchase it and collect rent when other players land on that particular space. If all of the properties in a particular set are acquired, house and hotels can be built there, allowing the owner to increase the rent. Four houses must be built on each property before a hotel can be constructed, which will net you the highest rent fees. Properties can also be traded with other players in exchange for other properties and money. Once a player is bankrupt, they are eliminated from the game. When there is just one player remaining, the game is finished and that player is declared the winner.

Upon up starting up the game, a profile is created that will keep track of your Monopoly money. By finishing a game in first, second, or third place, players will collect money to purchase rewards. The more you earn, the higher your profile level will rise. By leveling up your profile, more rewards will become available.

The six different modes of play are all decent. One of the highlights is a mode called 'Bull Market' in which all the properties are randomly auctioned off and the player with the most money after 20 turns is the victor.

Multiplayer is included for up to four players, though it is limited to local play. For a game of this nature though, it is hard to complain about online features as the experience would not be the same. Monopoly is a game that is best played with friends who are by your side and not on the other side of the country.

The graphics are among the best from Electronic Arts for Wii. The city board is the prettiest part of the game due to the lively nature of the board and the vibrant backdrops. The audio, while good, could have used a little more variation as the characters continuously repeat their phrases, which becomes rather monotonous. The background music, though, is energetic and gives the Monopoly Streets a very upbeat feeling.

Monopoly Streets is a great game as it is, but considering that the core Monopoly experience is available on other platforms at a much better value, it is difficult to recommend this edition specifically. On the other hand, if the different modes appeal to you and you want a good family-friendly game, then Monopoly Streets is definitely a great game to invest in.

I didn't know if I should pick this one up or not, seeing that my auntie already owns the first Monopoly game on Wii.


I guess I'll skip this one.


Thank you for the review, Matt. 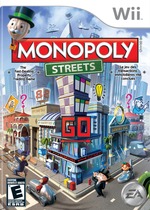