This wholly original Bond game is fun and filled with nameless henchman death.

Blood Stone for DS is a third-person shooter, unlike developer n-Space's other first-person shooter DS title GoldenEye and Call of Duty: Black Ops, based on an original James Bond story. The story is easy to follow, though it isn't that gripping. The presentation is fantastic, though. There are a lot of cut scenes filled with voice acting from Daniel Craig, Dame Judi Dench, and Joss Stone. It feels very much like a Bond story throughout, and it has several landmark set pieces that are fun to experience.

The game, much like GoldenEye on DS, excels when it's focused on the stealth mechanics. It's rewarding to crouch down and methodically take out enemies, even more so when you activate a Bond moment by setting something off that kills a number of enemies at once. Even when firefights occur, the game is still entertaining as you defeat a variety of foes. The stylus-based controls are smooth and intuitive, using the touch screen to move the aiming reticule and control reloading, weapon selection, and other options. The D-pad or face buttons are used to move James Bond around depending on your handedness, and the L and R buttons fire. Unfortunately, like other DS shooters, playing for a long stretch of time will undoubtedly cramp your hand.

There is a cover system that is rather integral to the game, and should be something familiar to veterans of third-person shooters. Occasionally you'll shoot at enemies out in the open or sneak up to them, but the most efficient way to move through the game is by going from cover to cover. The whole system works well, but it has one odd quirk. When you line up a shot in cover, and then lean out of cover, your crosshair moves, forcing you to line up the shot all over again. It's not a big issue, but it is a consistent annoyance you have to compensate for.

Outside of the gunplay and stealth, there are a lot of fun deviations from the formula. There are car driving segments, which are simple and offer a nice break from the regular gameplay, and an amusing poker section that manages to make the popular card game translate decently into a James Bond video game without being slow or plodding.

The online multiplayer is limited to four players and a small amount of modes. It's fun, but it doesn't have a lot of longevity. There is also multi-card multiplayer, but like most other DS games with multi-card play, you're unlikely to find another player with the game.

Blood Stone features a fleshed out single-player mode that features a good amount of gameplay variety and a nice presentation. The multiplayer might not be the best, but the game is a fun third-person shooter throughout. If you enjoy portable shooters, Blood Stone is worth playing. 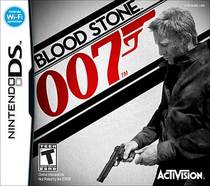