It's not much of a nostalgic trip, but it is a good DS first-person shooter.

While everyone seems to be in a frenzy about Eurocom's Wii re-imagining of GoldenEye, there is still the n-Space-developed DS version. Using the Call of Duty DS engine as a base, GoldenEye DS is a well-made first-person shooter that offers more quality gameplay than nostalgia.

The gameplay is a mixture of stealth and gunplay, and with the exception of a few areas, you have a choice between silently taking down enemies and getting into rambunctious firefights. There is something of a stealth path that you can take through most levels that contain numerous interactive items, such as pipes and barrels, you can shoot to defeat nearby enemies. It's rewarding to have that kind of control over how to attack a level.

Unfortunately, the gameplay is not without its flaws. For one, enemies take way too long to kill. You'll often have to rattle off an entire 15-round pistol clip into an opponent before he slumps to the ground. Also, enemies don't seem to be typical Bond enemies; they rarely miss you. If you're even the slightest bit out in the open, every enemy with any kind of sightline on you will hit you repeatedly.

The controls are reminiscent of most other DS first-person shooters (Call of Duty, Dementium, etc.), adapting to your handedness and using the stylus. However, GoldenEye DS is the first n-Space-developed DS game to introduce buttons mode, which uses the D-pad and face buttons are dual analogs. Each control method has their pros and cons, but they work well, and there is a good deal of control tweaking and customization. Along the way, there is a moment that make use of the DS is extremely creative ways. I don't wish to spoil the moment, but it will most definitely make you smile.

The story, which is told mainly through in-game cut scenes, is a reworked version of the original movie. It's hard to follow at times, but the basic parts get communicated to you, which is good enough. It is weird seeing 3D models interact with each other and not move their mouths, but that almost makes it more in line with the original game.

The main game is about five hours long, and offers a little replay value with different difficulty levels, featuring varying objectives. After you beat the game, you unlock the time trial mode, which allows you to run through each level as fast as you can in order to unlock cheats, which you can use to complete the levels even faster. It's not too engrossing, though, because early on it devolves into running as fast as you can, and by the time you unlock cool cheats, there's not much more reason to play.

The multiplayer, for up to six players both online and local multi-card, is fun, with game modes that hearken back to past Bond games, such as Golden Gun. When you find a game, it runs very well. Additionally, the multiplayer maps are fun and big enough to hold six players comfortably.

GoldenEye DS is a good companion to the Wii version, or even n-Space's other DS first-person shooters. The directed single-player experience is fun, and is at its best when you're sneaking around, silently taking out foes. The multiplayer might be more Call of Duty than GoldenEye 64, but it still carries some nostalgia. Unfortunately, you can't really relive the screen-watching glory days on DS. 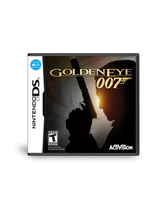