A great sign that the Pokemon Ranger formula is still as fun as it ever was.

Pokemon Ranger: Guardian Signs is the third entry in the Pokemon Ranger series, all of which have been released on the Nintendo DS. The line of games is aimed at a younger demographic, perhaps one that would feel overwhelmed by the amount of depth in the main Pokemon games, and while it is quite apparent that these games are significantly easier, they pack enough content and enjoyment to keep Pokemon fans entertained.

By stepping into the shoes of a Pokemon Ranger, players are bestowed with the task of keeping both humans and Pokemon in a state of equilibrium. In the Oblivia region, the Pokemon Pinchers are stealing Pokemon and abusing them. By joining forces with a lost Ukulele Pichu, your goal is to stop these criminals and restore peace to the region, with peacekeeping tasks along the way such helping Pokemon who are in peril. The plot is kept rather simple, this not a story-heavy game.

One of the key differences between Pokemon Ranger and the main Pokemon games is that there are no Pokemon battles. Instead, players use their Capture Stylers to befriend Pokemon that can be used to help out on the journey. These Pokemon will not stay with the character permanently, but instead return to the wild after they have helped. This mechanic is great in the sense that the game keeps pushing the player to try and befriend all the different kinds of Pokemon, but it would have been nice to have the option to keep a couple of favorite wild Pokemon to take through the game.

In order to use the Capture Styler, players must first come into contact with a Pokemon. The game will then switch from an overworld perspective to a zoomed in look. The Pokemon will wander around the screen, and while it is doing this, players must draw loops around it in order to convey feelings of friendship towards it. By drawing a certain number of rings, it will eventually decide to join your party and follow you around. It is a simple concept that is made difficult by the Pokemon's ability to unleash attacks that can damage the Capture Styler. If the Capture Styler takes too much of a beating, it will shut down, resulting in a game over screen. As the game progresses, the Capture Styler will become a stronger device through upgrades that give it more energy or health.

Up to eight Pokemon can accompany the player at one particular time. Pokemon in the game each have their own abilities, or field moves, that can be utilized in order to destroy obstacles. These moves range from using cut to destroy trees or logs that block a path, or a water move to eliminate fires.

The game is broken up into missions with a very linear flow. The main story can take upwards of 20 hours to complete, and with the Nintendo Wi-Fi Connection, additional missions can be downloaded to further extend the length of the game. The game is good value as there is a decent amount of content that will easily be enough to satisfy young gamers.

Guardian Signs adds some new features to the Pokemon Ranger formula. As the name suggests, players can draw signs on the touch screen to call upon legendary Pokemon, such as Raikou and Entei, to help out on the journey. They do not add much to the experience as they are basically just ordinary Pokemon, but young gamers will get a smile out of riding on their favorite legendary Pokemon.

Guardian Signs is not a deep game at all. The core gameplay mechanics are shallow, the story is largely forgettable, and the difficulty level leaves much to be desired. If you know a five year-old child who enjoys Pokemon but has trouble understanding the main games, this is a great game for them. It is a simple game designed for young audiences, which is great and all, but for core Pokemon gamers, Guardian Signs will likely feel like a missed opportunity. If you are looking for a different take on the Pokemon formula, Guardian Signs is a great title, but just remember that this is not at the same level of quality as the main Pokemon games. 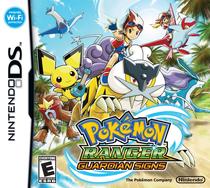