The sixth mainline Guitar Hero entry is a follow-up to the stellar fifth entry, which was a solid, mildly innovative iteration in the franchise. It added things like Party Play and Roadie Battle, which brought ease of play and DS connectivity to the table. Guitar Hero: Warriors of Rock improves on Guitar Hero 5, but also makes some weird design choices that clutter the experience.

The most peculiar addition is the Quest Mode. Taking the place of the series' standard Career Mode, it begins with an overwrought introduction from a barely recognizable Gene Simmons of KISS fame, followed by just a typical Career Mode progression, except this time there are loads of unskippable interruptions ranging from more Gene Simmons blathering to stupid cutscenes of the 'heroes' transforming. There's a potentially cool mid-point for Quest Mode where you play all of Rush's 2012, but even that is soiled by bored commentary from the members of Rush in-between songs. The only thing that Quest Mode adds that is even remotely interesting are the characters' special powers, which give you different bonuses in songs such as doubling your star power or keeping your note streak even if you miss a note. This addition is a prime example of how much of a video game Guitar Hero has become.

Aside from Quest Mode, the other big addition is Quickplay+, which takes another series staple and adds to it. You can complete a variety of challenges for every song on disc and a good deal of the downloadable songs, which use different aspects of the game. They range from standard goals, such as getting a high score or note streak, to more off-beat ones, such as using the whammy bar a lot or making use of a combination of the character's special powers to get a super outrageous high score. In case you didn't know, the roof has been blown off of the typical five-star system. You can get upwards of 10 or more stars depending on a combination of the powers and your own prowess. There's even a level progression in Quickplay+ that opens up superfluous things like venues, costumes, and more, but it's still addicting to have that ongoing goal.

In the latest revision of Roadie Battle, Vicarious Visions has blown the lid off of DS connectivity. You can now connect up to four DS systems and play with up to eight people cooperatively or competitively. While the setup for this is hard to come by, it's very cool in practice. Roadie Battle features some tweaks that makes the experience even better. DS-playing roadies have more to do and can make more of an impact on the guitar, bass, or drum player's score. Warriors of Rock also brings a neat feature that was introduced in Band Hero, which allowed a DS to be used to setup a set list in Quickplay.

The set list is a lot more focused this time around, which means that it appeals to a smaller group of fans. For me personally, the set list isn't too special. "Bohemian Rhapsody" by Queen, "Calling" by Strung Out, and "Uprising" by Muse are some highlights.

Guitar Hero: Warriors of Rock is full of hit-or-miss additions that don't make a huge difference to the gameplay. It's a capable entry in the series, but it's nothing special. If you're into the set list and only have a Wii, then definitely pick this game up. If you have the option to play your rhythm games on Xbox 360 or PlayStation 3, I'd recommend you do that instead, unless you happen to live in a house with seven other people and own four DS systems.

I played the game for quite a while at a friend's house on the PS3. I wasn't impressed with the soundtrack, which seems to be devolving into metal or punk rock, and THAT'S IT. I, too, am ready and waiting for Rock Band 3.

I played the game for quite a while at a friend's house on the PS3. I wasn't impressed with the soundtrack, which seems to be devolving into metal or punk rock, and THAT'S IT. I, too, am ready and waiting for Rock Band 3.

I was excited to see the tracklist because I thought that since it was primarily metal there would have to be some tracks that I liked. Turns out they picked absolutely ZERO songs that I care for. They came close with Arch Enemy and Children of Bodom, but decided to go with their more mainstream new garbage. I give up.

I'm not particularly enthusiastic about either of this season's rhythm games, but at least Rock Band 3 is actually trying to innovate. Guitar Hero is now on the same cynical tier as annualised franchises like FIFA and Madden. In sports game, you get a different set of players; in Guitar Hero, you get a different set of songs, but pretty much everything else is as it was. 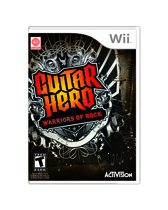