Batman: The Brave and the Bold

Batman: The Brave and the Bold for DS is, in a word, awesome. The 2D side-scroller has a nice mix of combat and platforming, beautiful animation, and a wide variety of characters. The Brave and the Bold is a great game from start to finish. Unfortunately, it is about three hours long, including bonus content.

Luckily, the short ride is excellent. The game is split up into several episodes, most of which give you the option to switch to a secondary character on the fly. The episodes are generally short, lasting about 10 minutes and featuring two bosses that are almost always fun and challenging experiences. The other characters (Green Arrow, Green Lantern, Red Tornado, Blue Beetle, Plastic Man, and Aquaman) are fun diversions from playing as Batman, and they all have specific abilities. They become a little less powerful as you work your way through the game since Batman has upgradeable abilities and they don't.

In each level, the character's special abilities are used to maneuver around in fun ways. You can use Green Arrow's plunger arrow to make your way up the side of a wall, or use Red Tornado's tornado ground pound to freeze lava so you can walk on it. The game's short length is felt most strongly in this gameplay mechanic because it would've been great to see what later levels would've had you doing with the different abilities.

In combat, each character features a different set of moves filled with strengths and weaknesses. For example, Aquaman only has the power to throw a weak punch and call fish telepathically to attack enemies. However, when you go underwater in Aquaman's levels, he can wield a water-based trident. Also, later in his level he rides a Gorilla Batman. Yes, this game goes there.

There is a combo system in place, and whenever you rack up a decent combo, you can unleash a powerful special attack that is different for each pairing of heroes. Green Arrow and Batman team-up to shoot off Batarangs and arrows all around the screen while Aquaman and Bats ride a giant whale to screen-clearing freedom.

The presentation is aces, with bright colors and splendid animation. The show's theme song makes an appearance as well, and the rest of the soundtrack is great. The graphics feature many layers of parallax, showing great depth and adding to the overall experience.

As you complete levels, you unlock bonus missions consisting of a boss rush for each level, an obstacle course for each character, and an arena battle for each character. They're fun diversions that remind me of the bonus levels in WayForward's 2009 Wii release, A Boy and His Blob. After you finish that up, there isn't much more to do in the game unless you also have the game for Wii, because then you can use the DS version to play as Bat-Mite in the home console version.

Batman: The Brave and the Bold oozes personality, bringing a lot of the cartoon show's wit and humor to the portable system. The short length makes it a tough sell, but it is a top-notch experience regardless. If you're in the market for an excellent side-scrolling action game on your DS, then Batman: The Brave and the Bold is worth the price of admission, even if it is a bit short.

I really want to buy this for both the Wii and the DS, but I just can't stomach paying full retail knowing they're both going to be $20 or less in about six months. :(

I may have to talk to my roommate about this... we are both big enough nerds that it might justify each getting a version of this game..... 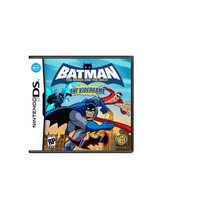