The new edition is good enough to get into the finals, but not quite enough for first place.

2010 FIFA World Cup South Africa was released across all three major video game consoles, with the HD versions slightly different to their Wii counterpart thanks to both the unique control schemes and additional content. Using the Wii Remote and Nunchuk, or the Classic Controller for a more traditional experience, Electronic Arts has taken advantage of the Wii and implemented a motion-based control scheme that results in a very easy to pick-up-and-play type of game. By shaking the Wii Remote, players can take shots and pass to other teammates or defend free-kicks, penalties, and corners. The Nunchuk is primarily used to control your character, in the same way as the analog stick on the Classic Controller.

Despite its family-friendly motives, 2010 FIFA World Cup still hinges heavily on strategy. Over the course of each game, players will find themselves building up the momentum meter, which can be accomplished through making quick passes and shots. The AI teams are also no walk in the park, so quickly rampaging up the field like you would in Mario Strikers Charged isn't going to work here. In order to secure the World Cup title, players will need to adjust to their team and figure out strategies that will help lead them to victory.

Wii games aren't typically known for their great online modes, but Electronic Arts has done a great job of making use of the assets that they had. Those looking for a quick match with a friend on the other side of the globe will feel right at home as the menus are easy to navigate and the matches are lag-free. There aren't any other modes outside of quick match, though.

Another great thing about 2010 FIFA World Cup is the amount of options solo players have. Most gamers will find themselves playing the tournament mode more than the other modes, especially with the multiple difficulty levels that keep it compelling for seasoned players.

In addition to a rather simplistic tournament-style mode, there is a mode called Zakumi's Dream Team, which allows players to compete in matches with nations participating in the cup. If your team wins, you are given the opportunity to select one of the opposite team's members to join your squad. In this way, you can attempt to build the ultimate soccer team.

From a visual perspective, FIFA 2010 World Cup is clearly designed to appeal to young generations of soccer fans, hence the reason why the game has a somewhat youthful look to it. While the menus are vibrant and full of color, the soccer games themselves leave much to be desired as they appear rather bland. Still, despite that minor gripe, 2010 FIFA World Cup manages to maintain a realistic approach to the sport while also making it appealing to younger audiences.

2010 FIFA World Cup is a safe move as it doesn't bring too much new content to the table. Still, there's a fair amount of content present, ranging from an enjoyable tournament mode to a decent online experience. Electronic Arts has created a great soccer game, but for those who have already played a FIFA game for Wii, you probably won't find anything worth getting excited about. With that being said, fans of the franchise or sport should definitely consider this excursion to South Africa.

While the backgrounds are a little bland at times, 2010 FIFA World Cup maintains a very realistic approach offered by the tournament itself.

The music is largely forgettable, but it does match the overall atmosphere of the game.

The Wii Remote and Nunchuk is the best way to go, but for gamers looking for a more traditional style of gameplay, the ability to use the Classic Controller is present.

2010 FIFA World Cup does exactly what it was suppose to do - create a great experience based off of the upcoming World Cup in South Africa.

How long you stick with the game will ultimately hinge on whether or not you enjoy playing games by yourself. If you are more of a sociable gamer, it would probably be a wise idea to check out the HD versions of the game instead.

2010 FIFA World Cup: South Africa is a great soccer game and a good title for families looking for pick-up-and-play type of game for their kids. Though not quite as in-depth as its HD counterparts, the Wii version will ultimately give gamers hours upon hours of great soccer matches. 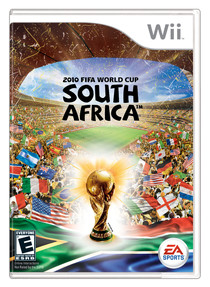