When it comes to racing games, no one can do it better on the Nintendo DS than Nintendo themselves. After the highly-acclaimed and successful Mario Kart DS. it’s pretty surprising to see that other developers haven’t tried their hands on the genre by creating an appealing and fun racing title with an all-star cast of iconic characters like Nintendo has. That is, up until Sega came along with Sonic & Sega All-Stars Racing.

Judging from the title, it isn’t difficult to make the conclusion that the game is largely based upon Sonic, and while that may be true to some extent, the game more or less takes all of Sega’s iconic characters and throws them into a racing title that is heavily based upon Nintendo’s own creation.

There’s no doubt about it that Sonic & Sega All-Stars Racing is heavily influenced by the Mario Kart franchise, and for good reason, too. Like Nintendo’s own series, Sega and Sumo Digital have decided to trade in realism for an over-the-top, high-speed racing game, filled with items and a varied cast of characters, ranging from Sonic the Hedgehog himself to AiAi from the Super Monkey Ball franchise.

One of the more notable racing techniques from the Mario Kart franchise, known as powersliding, finds its way into Sega & Sonic All-Stars Racing, in which the longer you drift, the more speed you’ll pick up. The driving mechanics are pretty solid for the most part as well, seeing as the game rarely slows down. Once you take off at the starting line, you’ll be going non-stop until the end.

The Mario Kart franchise is known for its personality; from its beautifully crafted courses to its wide variety of unique items, it’s pretty difficult to find a racer with more character than Nintendo’s own. While Sega has attempted to capture that charm in their own racing creation, the end result is slightly below expectations. The items, for instance, are anything but original. In place of Mario Kart’s banana peels are traffic cones, while boxing gloves and rockets have taken the spots of shells.

The courses also leave much to be desired. The tracks are certainly very diverse in terms of level design but can’t help but be noted that the screen size of the DS limits the visibility of the course. In this sense, players are constantly struggling with the idea of where to go as they don’t have a clear outlook of the course.

The game are pretty decent and run pretty smoothly, but the game as a whole isn’t quite as vibrant and appealing as Mario Kart DS.

While a step down from the console versions, the handheld version still manages to retain some enjoyable and upbeat tracks.

Sonic & Sega All-Stars Racing on the DS plays great for the most part, but compared to Mario Kart DS, the game feels a little loose.

The size of the DS screen often limits players' visibility while racing, but for those who overlook that minor gripe, they’ll find a very deep and rewarding racing title.

There are 20 racers, 24 tracks, and over 60 missions to entertain solo players, while those looking for a competitive experience can hope online to race against the world.

Sonic & Sega All-Star Racings is a decent effort from Sega and Sumo Digital that is likely to be considered as a Mario Kart clone. Though there’s no denying that the game burrows heavily from Nintendo’s own franchise, Sega and Sumo Digital have served up a good alternative to Mario Kart DS. Those looking for an experience similar to that offered by Nintendo’s franchise should look no further than this. 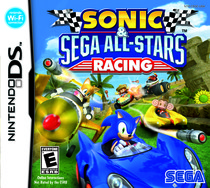