Finally, here's a game that reminds us that Native Americans were magical.

Immediately upon starting Brave: A Warrior's tale, the player is given the choice between a male or female character. This choice is largely meaningless, as 90% of the game takes place in a flashback where you control the character of Brave. This, perhaps more than anything, is a great example of how this game fails to do almost everything it sets out to do.

It's hard to tell exactly who is supposed to be enjoying Brave. On one hand, the game looks and feels like a low resolution Saturday morning cartoon, complete with youth-oriented voice acting and dialogue; on the other hand, the game's shortcomings take away the enjoyment to such an extent that most people in the target audience would probably get too frustrated to play the game all the way through. 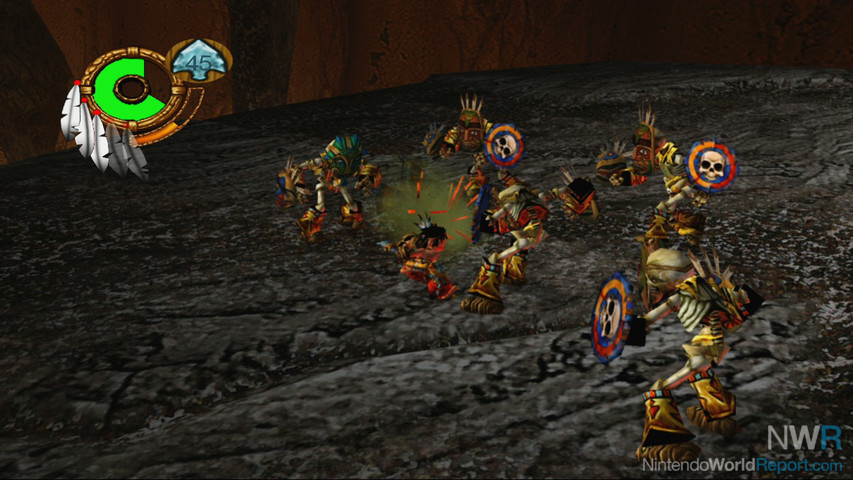 First, the positives: the game has fairly good art direction. There are many different types of environments, and most of them feel lush, lived in, and colorful. The camera movement and direction during cut-scenes is well done, and the story, though convoluted, is told as well as can be expected given the unimaginative source material. There is extensive gameplay variety: Brave steers a canoe, rides an eagle, controls a bear, engages in hand to hand and ranged combat, and climbs a mountain. The checkpoint system is very forgiving, and if you die in the game, you can be sure you won't be set back too far. This is useful because there will be many missed jumps to try your patience.

As mentioned earlier, there is a choice in character model. In the small portions of the game where you get to control your chosen character, the voice acting during gameplay is very similar, and perhaps identical. In cut-scenes, however, there are small differences, such as the female character having a higher voice and painting her nails while being talked to by a tribe elder. The two characters play exactly the same, but when playing as the female, the differences in the voice acting between gameplay and cut-scenes are pretty striking. Aside from this, the changes are completely superficial. The male and female characters even share the same name, "Courage".

Unfortunately, none of these things matter when the control and camera are so bad that the game feels far more difficult than intended. When jumping, Brave feels very floaty and never quite lands where you expect him to. The character model never seems quite at home in any of the environments, and it creates a problem when trying to perceive the depth of your jumps as you hop from platform to platform. Later in the game, this becomes an even larger problem as you spend time amongst many floating platforms that in some cases are moving quite quickly. This game really makes you appreciate how easy it is in Nintendo's 3D Super Mario titles to tell exactly where your character will land.

The bulk of the gameplay is very similar to the Zelda series, with the primary attack button being mapped to the B button. When you hold down the button, you get a stronger attack, and if you hit the attack button in mid-air, Brave executes a downward strike. Some of the attack animations are actually done quite well, but most combat in the game is nothing more than standard hack-and-slash variety. You earn a ranged weapon later, but it isn't particularly useful because most enemies are fast enough to attack before you can charge it up. If it's not charged, it's not powerful enough to matter.

There are some interesting special attacks, such as the ability to channel the form of a bear, or call lightning or fire down to assist you; unfortunately, these are only given to you during the moment you need them and then are gone as suddenly as they arrived.

There are two vehicles in the game, a canoe and an eagle, and while neither control great, the canoe is especially bad. Brave takes control of the canoe twice in the game, each for an extended period of time. If the canoe hits the rocks four times, it sinks and you must start over from the last checkpoint. This seems fair, but the canoe controls like a go kart on a sheet of ice, and the rocks (and later whirlpools) begin to come fast and furious. These sections of the game were simultaneously boring and frustrating, and I found myself wanting them to be over with as soon as they began. Luckily, the second of these two sections has checkpoints, which makes it more tolerable. Thankfully, the eagle works better than the canoe and is used often in the game after initially introduced. You can expect to fight boss battles on eagle-back, and the game gives you the freedom to invert the controls to match your preference.

There is some rudimentary camera control in the game; the player can hold down left on the D-Pad and use the analog stick to rotate the camera around Brave, but this requires the player to stop moving, which is unacceptable. The player can also swing the camera behind Brave with a tap of the C button, but this is usually prevented by the terrain. The camera is consistently a problem in the game, as you can never quite get the angle you want to before a precarious jump. 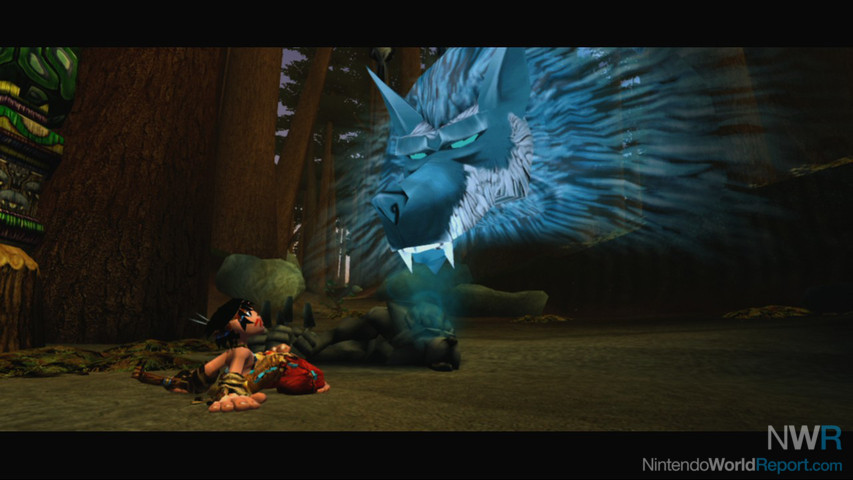 The level design is linear, but in some sections there are wide open areas where it is easy to get lost if you don't use the mini-map provided, which is turned off by default. Only by testing buttons on the controller did I realize the map was there, as the game did not explain this feature until considerably later, as it displayed random gameplay tips on the loading screen between levels.

Although Brave has fairly good art direction, the textures are very low resolution, and most of the time, the game feels like it might have been a launch title on the Dreamcast. The frame rate is very inconsistent, sometimes feeling silky smooth, but never going very long with some kind of sputtering. In some of the later levels with larger outdoor areas, there are some gaps between bitmap images in the background, which is distracting.

The music is bland, with only nominal tribal drum beats and flute looped over and over again. There are slight variations during boss battles and cut-scenes, but these are hardly noticeable. What is noticeable, however, is when the music abruptly cuts out entirely for 15-20 minute segments of the game until the next level begins.

There are moments in Brave which impress, but these moments are invariably surrounded by frustration, boredom, and lots of head-scratching. While a fun and convincing world has been created for you to run around in, the game seems to actively work toward taking that fun away by making you spend 20 minutes climbing walls or ramming your canoe into a boulder. If you can't get enough of 3D action platformers, this isn't the worst choice you can make. At some point during the game, be it after Brave cracks the same joke a third time, fails to make a simple jump, or mindlessly hacks up his 700th foe with the same attack, you will long for the warm embrace of a much better game.

The game is fully voice acted. Thirty minutes in, you'll wish it wasn't. The music is bland and sometimes cuts out entirely.

Hand-to-hand combat is boring but reliable. There are some interesting special attacks, but they only come into play when you need them. Jumping mechanics are very frustrating, especially later in the game.

Most of the game is spent exploring, fighting, or steering an eagle or canoe. Some of this is fun, some of it is not, but there is a wide variety.

The game has some collectables that might have you hunting a bit longer than you would have otherwise, but aside from that, there's not much reason to replay it.

Brave works as a mediocre Zelda clone, but it won't satisfy anyone who's touched a more polished game with the same ideas. Boring at times, interesting at others, the game is rarely anything but average.

It's one of those weird things where I decided to go by a different variant of my full name (Andrew) online.  This was before I ever expected to actually MEET people online.  I now respond to both on a regular basis.  I am more used to hearing "Andy" and more used to reading "Drew".

I  I  my... my frame of reality has been shattered.

Heh, looks like a great deal of the review will be spent discussing the reviewer's name. Good job, NWR, good job.

Wasn't this a gamecube game?

RERAIL!
Sounds like an over-ambitious game with a developer not quite up to the task. :(

REDERAIL!
I call him Andy in person, but DrewMG online. BUT, when we're hanging out in person but chatting via Twitter, I call lhim Pookums.

Wasn't this a gamecube game?

It's a sequel to a PS2 title called "Brave: Search for the Spirit Dancer" but I couldn't seem to find much info on how the games are related.  It might actually be a remake of the PS2 game, but I couldn't find any info to support that theory.

EDIT: Okay, I just looked it up on YouTube, and it appears that this game is more or less a remake of the PS2 title, except for the non-flashback scenes.  So 90% of this game's content is a port, 10% is original.  An interesting approach.

So, the male and female you choose at the beginning of the game, are they modern day indian kids growing up on the Rez?

Besides, the character in the flashback, Brave, is telling you his story as an adult; only 30-60 years could have realistically passed. 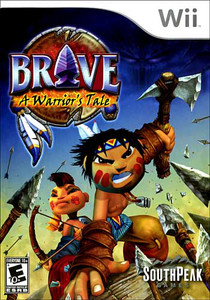