A budget-priced game with cute characters, falling blocks, and cheeseburgers.

Roogoo Attack is a puzzle adventure game that follows the storyline of cute little animals named Roogoos. The planet gets taken over, and all the Roogoo are transformed by their captors into evil Meemoos, who are driven by greed and greed alone.

The player helps Roogoo as he attacks the Meemoos by lining up falling shapes into corresponding holes on floating, round platforms. For instance, a falling star must go into the star-shaped hole; if the star falls onto the triangle hole, it will bounce off, resulting in lost time and space filled up on the side meter. If the meter fills up, the level has to be restarted. The player lines up the shapes with the holes by shifting the platform in a circular manner using the L and R buttons. The shapes range in number from three to five and include circles, stars, triangles, squares, and hearts. A shape will usually rest on the hole until a few more are stacked on top of it or there are stacks of other shapes alongside it. Usually, a few stacks of shapes will fall at the same time.

Sometimes the level will consist of objects other than shapes, such as roosters, treasure chests, snowmen, and even cheeseburgers. This really works in the game, since after a few levels of falling boxes, they might be the last thing you want to see again. All of these sets come in groupings of two, three, and four. The rooster falls in the order of: nest, egg, rooster. However, the rooster is color-coordinated by a ring around the nest and the color of its head; so a green rooster needs to fall on a green nest, which must lie on a green hole. If the player puts a green nest on a blue hole, the consequences are the same as dropping a star onto a triangle hole. These levels appear once or twice per world and really break up the monotony of the falling shapes.

Another way that the monotony breaks is in the optional skydiving levels. Each world has one, and they are all optional and fun. Roogoo freefalls in a circular motion, collecting as many shapes as he can while avoiding Meemoos, who are seen flying up at him, floating in the air or gliding in a biplane. You can shoot at the Meemoos, which frees up space. Early on, the Meemoos are incredibly easy to avoid, but as you go further in the game, it becomes quite challenging. You lose the level once Roogoo hits five Meemoos, and then you can either try again or skip it.

The player guides Roogoo through a map that brings him through a variety of scenery such as lowland plains, an ocean, snow-capped peaks, and a fiery wasteland. The difference among these worlds is mostly the background scenery, buttheyalso serve as introductions for the aforementioned cheeseburgers, treasure chests, snowmen, and roosters.

There are also obstacles that make the levels considerably more involved, if not more difficult. Some platforms will have Meemoos sitting on holes, and they must be bumped off by speeding up the shapes by pressing A, which can be done at any point to move faster and get a better score. In addition, the platoforms sometimes flip, and holes are occasionally covered with lids that open and close. The trick is to time it, otherwise shapes will go flying and the meter will fill up. There are also platforms that have flowers growing on them, attracting butterflies that enjoy picking up the stacks and bringing them up a few levels higher to impede your progress.

In addition to the single-player mode, there are both single and multi-card multiplayer modes to play against up to three friends. All of the levels and worlds are playable in both modes, with different rule sets being the only advantage to the multi-card play. There are also a handful of levels that you can unlock by connecting to Roogoo Twisted Towers for Wii.

While Roogoo Attack doesn't seem to be much more than a children's game, there is a lot to like. The storyline is adorable and fun, and the game does a great job of breaking up the monotony with different ideas. It might be a bit simplistic, but it's still a solid game with a lot to do.

The graphics exhibit little depth of field, which leaves one wondering why they aren't smoother. Storyline graphics are, however, smooth and clean.

Playful songs fit the mood of the game.

The controls are simple to learn but challenging to master. The optional skydiving levels are sometimes tricky to control, but they're optional, so it doesn't hurt the game much.

At its base, Roogoo is a fun game to play despite its simple nature. You might just be dropping shapes into holes, but there's enough variety that it never gets stale.

While the beginning levels are a little trite, I do enjoy replaying later, tougher levels, especially the ones with the cheeseburgers. If you have DS-owning friends, the multiplayer can also lengthen the game's life.

Roogoo Attack has a lot going for it, and not much going against it. It's a budget-priced title with fun gameplay and a lot to do. It's a very complete package. 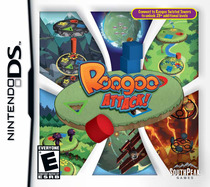