Grow a colony from the ground up in this brand new simulation…then wonder where the last 15 hours of your life went.

Back when I was young, there was a game available for the PC called Sim Town; it was a simplified version of the world-renowned Sim City. All I could do was place buildings, build schools and parks as my people asked for them, and win awards. It was simplistic, addicting, and indescribably fun. As gaming has progressed, simulations have become clogged with excruciating detail, destroying the original formula that, despite being elementary, worked extremely well. Dawn of Discovery is a return to that formula, blending old school ideas with modern flair to create a unique gaming experience Wii owners are sure to appreciate.

When starting a new game, there are two different modes to choose from: Continuous and Story . Within Story mode, players follow the story of Prince Edward who, by order of his father King George, must find new land to settle in order to provide food and new shelter for their kingdom’s starving inhabitants. Edward is joined by an advisor Cornelius and a brash young explorer named Evelyn, who offer guidance to players throughout each new obstacle while providing constant feedback.

Story mode is split into seven chapters, each of which expands upon Edward’s tale and presents new obstacles to overcome. Within the first chapter, players are given an island to settle and are guided through gameplay basics by Evelyn and Cornelius. The first tasks include building lumberjack huts in order to gather building materials, fishing huts for food, and dairy farms for milk. After all, in order for settlers to move in, they must have food and building materials to create their shelters. Once basic needs are fulfilled, players can start building their towns, one house at a time. It’s this gradual introduction of new concepts that makes the game so addictive and appealing. Players will find that just as they have mastered all of the tools and strategies needed to be successful for one chapter, a new slew of items and buildings open up in the next.

This is where the greatest part of this title comes in to play: the strategic element. In later chapters, players are given access to more than one island, and certain islands may be better suited for growing a particular crop, which is determined by the fertility level of a particular good. Others may be too small for a decently sized settlement and thus are better used for dairy farms, stone and iron ore mills, lumberjack huts, etc. On others, the fertility levels for all supported crops may be so low that it only makes sense to utilize the island for a large settlement.

Eventually, settlers will wish to advance in their civilization level and will demand particular goods or services from the player. These demands introduce new buildings, crops, and goods, such as herbs, spices, hemp for clothes, and clay for pottery. As settlers increase their social level, the rate at which they may be taxed also increases. This brings in more money, which allows players to build more structures in order to support a larger colony.

As the chapters progress, players will find themselves associating with other cultures and gaining new technologies, such as the water pump, which is acquired through establishing a good relationship with the Orient. Players will need to complete achievements in order to unlock new island locations, build shipyards to travel to new locales, manage the needs of an ever-increasing population, and defend their colonies at all costs against fire, illness, and invaders.

Even though each chapter within Story mode has a set goal, there is never any rush to complete it. The beautiful part about this game is that it caters to all types of players. For experienced gamers, just as the challenge level seems to be falling, a disaster will strike in one of your colonies, requiring you to think critically on the best way to solve the issue. For the more relaxed gamer, you can simply think things through slowly and take your time at a calmer pace.

At the conclusion of Story mode, players will have mastered all the knowledge and techniques for growing a successful civilization. Even after the main quest, which contains more than fifteen hours of gameplay itself, players can take on the challenge of Continuous mode, which allows them to customize their own map in order to make the experience as hard or easy as desired.

There aren’t enough words to describe what an incredibly fun experience Dawn of Discovery is. Whenever I thought I had it all figured out, the game threw another challenge at me, keeping the gameplay fresh and forcing me to keep thinking. This game is sadistically addicting and can make five hours of gameplay feel like just one. This is by far one of the best titles on Wii and is a must-own for all players.

From far away or zoomed in close, Dawn of Discovery is a pleasure to look at. It’s cartoony yet realistic. Whether it's the smoke rising from the chimneys, or the animals frolicking through the woods, the subtle details are what make the game shine.

Dawn of Discovery revolves around its sound effects. While the background music is upbeat and catchy, it is obviously not designed to be front and center. Little touches make the experience more enjoyable, including the sound of crashing waves and wagons rolling through the streets.

Pointing and clicking has never been easier, and whether players are placing a house or sailing through the waters, they are sure to be impressed with how smoothly the game controls.

The word "fun" doesn’t even begin to describe Dawn of Discovery. The pace is fantastic, challenges always arise just when players think they have it all figured out, and managing multiple islands full of people requires focus and attention.

There is unlimited potential for replay with Dawn of Discovery. After the main quest has ended, Continuous mode allows players to customize their own experiences, where the possibilities are endless.

Dawn of Discovery is a fantastic addition to the Wii library and makes excellent use of all the Wii has to offer. It’s a great title for gamers of all ages and skill levels; the game is hard enough to keep experienced gamers satisfied while being evenly-paced for beginners to also enjoy.

60 hours and counting...and that's just Story Mode.  I can't wait to get into Continuous Play.

I need to try and keep this game from falling off my radar like it is threatening to do. I think I'll get this Wii version over the DS one.

FYI, Walmart.com has this game for $19.82. Totally worth every penny. 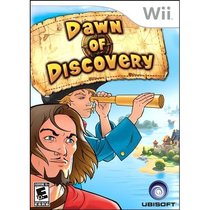