Let's Tap, from Yuji Naka's development team Prope, is a weird game. Billed as a game so simple a penguin could play it, the game's controls are extremely straightforward, requiring you only to place the Wii Remote upside-down on a box and tap the box. In five mostly entertaining modes, Prope experiments with different genres using this unique control scheme. While not a top-tier game, Let's Tap is very interesting.

The first of the modes, Tap Runner, is a side-scrolling obstacle course. The faster you tap, the quicker your character goes; double-tap and you jump in the air to avoid hurdles, electric balls, and more. Playable by up to four players (computer-controlled characters fill slots not filled by humans),Tap Runner challenges you to get different ranks depending on how quickly you finish the course. If you get a medal in every four-course world, you unlock the next batch.

Tap Runner is fun, but the controls require a bit of precision. Your character moves faster depending on how quickly you tap. If you tap too quickly you might accidentally jump, which can be crippling because you slow down to a halt. That problem aside, the Rez-like aesthetic of the mode looks fantastic, and is the best in the game.

Rhythm Tap, the second mode, is similar to games such as Donkey Konga. It's a rhythm game that has one to four players tapping to the beat of a song in three different degrees: light, medium, and hard. The song selection is all very Japanese, but it does include variations on the song's popular title track. You get scored on each song and unlock new tracks in a manner similar to Tap Runner. Despite a lack of depth, this mode is a solid rhythm game tucked inside of a larger game.

The third mode, Silent Blocks, is a puzzle game that is tangentially related to Jenga. You begin with a large tower of blue and red blocks and your goal is to select a block, and then artfully tap it out of its place in order to line up three or more blocks of the same color. As you do this, the blocks compress into different-colored blocks that are generally precious metals like silver and gold. There are a few modes here, including a single-player mode in which you try to keep the ever-growing tower from falling, and a multiplayer mode that has you racing against other players to match enough blocks to get a certain color.

Silent Blocks probably would have been better off using a different control scheme. It's a fun puzzle game, but its controls are often obnoxious. It starts automatically scrolling through blocks until you find one you want to remove, and you then tap to select it. The problem is the fact that you can't back out of a selection, which can pretty much ruin your game if you mistap.

Bubble Voyager, the fourth mode, is something akin to a side-scrolling shooter. The single-player mode has your little hero automatically moving across the screen, with the player trying to avoid hitting damaging asteroids and other hazards while collecting stars. The stars add to your score at the end of each section, which concludes with a landing sequence that has you easing up your character's descent by tapping. During the regular gameplay you control your altitude by tapping, and fire missiles by double-tapping. There are also different power-ups you can collect that give you health or stronger firepower.

The multiplayer mode is a lot different and feels more like Asteroids, with players attempting to kill each other. Up to four characters spin endlessly around in a circle on a static screen, moving when the player taps and firing when they double-tap. It's not as fun as the single-player mode, which is actually a rather intriguing take on side-scrolling shooters. In both modes, the controls work pretty well, although sometimes double-tapping is problematic in the heat of the battle.

The final mode is the Visualizer, which has several different environments to look at, ranging from an ocean to a fireworks display. As you tap, you trigger different effects, such as ripples in the ocean or fireworks. If you execute a specific series of taps, you can trigger spectacular effects such as big fish or more impressive fireworks. This is a very straightforward mode, but it's visually pleasing and fun.

In general, the visual style of each game is trippy and enthralling, and while the extremely awesome title song doesn’t pop up that often, the music is still great. The controls work well for the most part, although a few issues pop up frequently. The game sometimes has trouble differentiating between light and hard taps, and you'll experience accidental double-tapping. Still, Let’s Tap is fun in its simplicity, and anyone who is into experimental and unique game design should probably check out this bizarre game. If you’re searching for something conventional, you should look elsewhere.

Each game in Let's Tap has its own graphical style, and it works wonderfully. It is very reminiscent of games like Rez.

The music is distinctly Japanese and extraordinarily catchy, and the sound effects are very ethereal.

The tap controls work great for some of the games (Rhythm Tap), but have some problems in others (Tap Runner, Silent Blocks). It's a fun experiment, but this won't convince anyone that tapping is the future.

The tap-based gameplay shows old genres, such as platformers and shooters, in an interesting new light. With five different games, there is a lot of variety even though each one is a little on the shallow side.

While the tapping concept doesn't make Let's Tap a great game, it does make it an interesting and fun experience. It's well worth the price of admission for fans of off-kilter gameplay, but players looking for a deep affair should move along.

And you can see why this game is awesome here: http://www.youtube.com/watch?v=0D9BuuLCrqw The song is awesomeness! 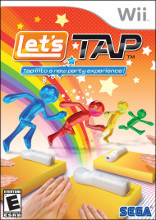