A from-the-ground-up Wii title that still shines despite its technical faults.

The first Overlord game was released in 2007 on Xbox 360, PC, and later PlayStation 3. It was generally well-received and often compared to Nintendo's Pikmin series. When the next round of Overlord games was announced last year, a Wii-exclusive prequel called Overlord: Dark Legend was revealed. While Dark Legend doesn't have the same polish as Nintendo's Pikmin titles, it's still full of personality, dark humor, and fun gameplay.

The player controls a teenage Overlord who has just discovered his dark destiny of restoring his castle's legacy and humiliating his siblings, who pretend to be a dwarf and an elf. He is armed with a large weapon, some magic spells, and a gauntlet that he uses to control his minions, which are small gremlin-like creatures. These minions come in four different varieties: brown, which are the strongest fighters; red, who deal with fire and are ranged attackers; blue, who can walk through water and revive dead minions; and green, who deal with noxious gases and are good at sneak attacks. You begin with a limit of five brown minions, but as you progress through the game, you uncover the other three kinds and find items that increase the amount of minions you can control at once.

Despite being extremely linear, the game's quest is a very entertaining one. You'll come across humorous fairy tale parodies, such as a maniacal Little Red Riding Hood and a masculine tooth fairy named Miss T. It's not quite the fantasy epic you'd expect, but the humor and gameplay carry the game with little trouble.

Throughout the 10-hour experience, the Overlord uses the minions to do his bidding, which ranges from battling enemies to solving puzzles. You can easily cycle through the specific groups of minions using left and right on the D-pad, or you can used down to select the whole group. This comes in handy because only certain minions can go to certain places. For example, the blue minions can wade through water while the green minions can go through poisonous gas.

The minions are controlled by the Wii Remote's pointer in conjunction with the B button, and they can be moved across the screen easily. It gets a little tricky when you want them to do specific things in close quarters, though. Depending on what the on-screen reticule shows, you can get your minions to break stuff, fight enemies, or push levers. Oftentimes these actions are close together and sometimes overlap, especially when there are multiple enemies and you want to focus your attacks on one of them. If you ever want to recall your minions, all you have to do is hold down and the A button and they return to you; however, sometimes that doesn't work and you have to leave an area before you get all of your minions back. Aside from these issues, the pointer works well and gives you a great sense of control over your charges.

As for the Overlord, he's controlled with the analog stick and swings his weapon with the Z button or a flick of the Nunchuk, the latter of which is a bit imprecise. He can also perform magic spells by pressing up on the D-pad. Throughout the game you’ll come across spell relics, which unlock different spells ranging from typical lightning bolts to more humorous ones that do things like turning your enemies into sheep.

New to the series is the ability to throttle minions. With a flick of the Wii Remote, the Overlord grabs one of the little buggers as the camera changes to more of a first-person view. You then shake the Wii Remote and launch the minion off ahead of you where he explodes upon impact. While this mechanic isn't a focus of the game, it is a really nice touch. This use of motion control is great; it's visceral without being overbearing.

Secondary gameplay mechanics like these occur in multiple areas in the game, but that's not a bad thing. Dark Legend introduces you to a good number of such mechanics, such as throttling minions, setting up guard markers to leave minions in a specific place, and the green minions' stealth abilities, but never really forces you to use them in specific ways. They are effective in many situations, but it's left up to the player to use them as they see fit. This design fares much better than forcing players through an area that requires them to use one mechanic over and over again.

During the game, you come across tons of gold, which can be used to upgrade your minions and your Overlord. There's not a lot to this upgrade system, as all you can do is raise the levels of your different-colored minion hordes or upgrade the Overlord's weapon and armor. There are also different upgrades that you come across through normal play that upgrade the Overlord's health and mana, and the amount of minions you can have out at once.

There are a few technical problems, specifically the large amount of bugs. As I mentioned before, minions will basically just disappear and the only way you can get them back is by leaving the area. In addition, there are a few other weird bugs, such as the Overlord's hand glowing long after he casts a spell, or a non-playable character repeating the same line twice. The graphics engine also suffers from a high degree of pop-in, but the visuals look wonderful aside from this issue.

Overlord: Dark Legend is damn fine game when all is said and done. It's a focused, linear experience that never really slows down. There's not a lot outside of the entertaining main quest, but the time you’ll spend completing it is riddled with fun and absurdity. Anyone who's been waiting for great Wii exclusives - and always wanted their Pikmin to be more evil - should not pass on this great game.

While there are a few graphical bugs and pop-in, the game looks great and the art style has a lot of personality.

The voice acting is top-notch, the sound effects are comical, and the music sets the mood perfectly. Occasionally characters will oddly repeat themselves, but this doesn't affect gameplay.

This game was made for pointer control and the Wii has a pointer; it's a match made in the stars. Besides some minor camera issues and some trickiness when ordering minions in close quarters, the controls are excellent.

With four different minion types, more than a half-dozen spells, and countless other gameplay mechanics, Dark Legend has a lot of variety in its simple gameplay. It is extremely gratifying to walk into a forest and send your minions to kill enemies, break boxes, and then bring all the spoils back to you.

The game is nothing more than a 10-hour adventure with a few small side quests. It's a great ride, but there's not much reason to replay it. Still, it's good fun while it lasts.

Dark Legend has some minor issues, but when it comes down to it they're really negligible. At heart, this is a great Pikmin-like experience with an overabundance of personality and a good dose of fun.

I really need to get this.

Keep pumping out the reviews!

Good review though, I might have to look at this when I finish my backlog.

The irony is that it has taken place under Lindy "Spiderwick" Luthor!

Climax is probably the new Rare.

That's because it was never bad for me.
I had heard the framerate was bad, but I personally never had any qualms with it.

From what I translate, I think Pro is saying he is a frame-rate whore? ...right?

Well, it straight-up did not affect me as in I never had any issues with the framerate. I reviewed it based on my experience with the game, not yours.

Nice to hear the game is pretty good. I still plan on getting it. 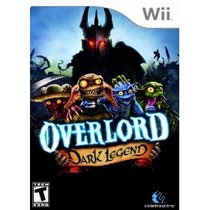