An adventure in endless menu navigation.

Avalon Code is a beautiful, high-production-value RPG on the DS that I really, really wanted to love. It has real-time combat, funny and unique characters, an intriguing storyline, and tons of weapon/gear customization options. But this is only half of the game—the other half consists of endless menu navigation and the moving around of Tetris-style blocks. This aspect of Avalon Code becomes tedious and unenjoyable, and it really drags the rest of the game down. Add the repetitious “dungeons” and occasionally frustrating world navigation and you’ve got a downer of a DS game.

You star as a girl (or a boy) who inherits the Book of Prophesy, which has the power to change the existing world and make a new one when your world ends. The end of your world is apparently happening very soon. But before the violent finale, you must seek out four spirits who normally live in the Book but whose pages have been scattered throughout the world. These spirits represent the four elements and will help construct the new world. At least, this is what I could piece together. The story is never explained very well, plays out too slowly, and merely provides a context for the game’s unique and overbearing menu system.

Overworld exploration and combat is generally fun and satisfying. The game is presented from a bird’s eye view, and most maps are wide-open spaces littered with a few monsters and objects to look at. One drawback is that the overworld maps are really too big; it takes a long time to get from one end of even a town to the other.

You move around with the D-pad, perform an evasive roll with the shoulder buttons, and attack with the X and Y buttons. You can equip two weapons at any one time. In towns, you can interact with people, objects, and signs with the A button. Eventually you’ll learn a little juggling mini-game which you start with the A button. This mini-game—Judgment Link—is a fun field exercise, but virtually impossible to play with any strategy during the in-game tournaments. Tournaments involve a hacky-sack like exercise in which four characters (including you) try to hit the object higher and higher, and hopefully cause the competition to miss a hit. The layout is poor, and it’s never obvious when the ball is coming your way.

One of your primary gameplay tasks is to defeat “dungeons,” which merely consist of a series of rooms in which you are tasked with hitting all the switches or defeating all enemies for a final score. Often, performing special actions (such as destroy all the boxes in the dungeon as well) will grant you more points for a room. Unless you’re hideously low on health, dungeons are rarely problematic, but there are a lot of them – in fact, almost too many. This dungeon element is what could be considered onehalf of Avalon Code, and it’s done fairly well.

The other half of the game involves the Book of Prophesy itself, also known as the Touch Screen. It is always displayed, and you are free to peruse its pages at your leisure. To be fair, the book is organized nicely, and there’s more text and backstory than you probably have time to read. Anything you “Code Scan” (using the B button) is recorded in the Book and given its own unique page. Every person, enemy, and item in the game has unique elemental properties. These properties are represented as Tetris-style blocks arranged on a 3x3 grid. You can move these blocks around or swap them between pages to give different things different elemental properties. In theory, this is great. Want an enemy to have lower health? Remove its “Fire” element and replace it with an “Illness” element. Want to create a more powerful weapon? Replace its “Copper” element with “Steel” and add some “Flame” for good measure. You will sometimes find recipes for tempering your equipment, but it’s just as useful to experiment.

Totally cool, right? Turns out it’s not. You can only put four elemental blocks aside at any one time, so you will constantly be swapping blocks from page to page, and trying to remember which element you put where. Just when you think you’re in the clear, you’ll discover that the block you’re trying to impart is too big for that page’s grid. None of this would be such a hassle if you weren’t asked to move stuff around so often, but you are. Cure the sick, heal the injured, change your weapon’s element to hit a switch, make this enemy easier to kill, answer questions from the Book itself…you’ll find yoursef dipping into the Book all the time, and shifting blocks around just as much. Bizarrely, you can level up each page of the book by reaching some secret element combination or killing so many enemies of that type. Leveling it up sometimes results in a larger grid being drawn, but your ability to hold onto pieces (a maximum of four) never increases. It’s very frustrating.

Avalon Code’s graphics are fully 3D all the time, and are gorgeous at every turn. The music is similarly excellent, featuring catchy epic themes and nice ambient sound effects. The writing is great, and gives life to many unique characters (although the dwarves talk like Neanderthals). The more you play Avalon Code, the more repetitious it becomes, and the more frustrating that Book of Prophesy gets.

Avalon Code has high production values and heart, but element-swapping really saps the fun out of the experience. There are better RPGs out there.

Absolutely gorgeous, although human characters (including yours) could use a few more frames of animation. They keep repeating the same motions.

Combat and overworld control is great. Sometimes sliding element blocks around with the stylus can be wonky, in that you’ll try to place a block and it won’t register, or it will be placed incorrectly.

Despite the fact that there’s a lot to do, you will quickly discover that you’re doing the same thing over and over again. How many times do I have to change my weapon’s element to hit these switches? Argh!

The game will take you a while as the story is quite long, but you may grow bored and frustrated with the game’s repetition well before the end. 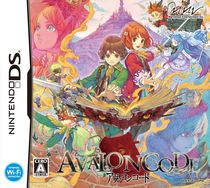