A fully-equipped strategy game on the DS? Oh, yes!

You wouldn’t think something like Civilization could fit onto a tiny little DS game card, but Age of Empires: Mythologies gives you all the turn-based strategy you could want and more in a handy portable format. It offers three campaigns, quick play games, a wealth of multiplayer options, tons of unlockables, and a slew of achievements.

The game’s scope is vast, encompassing three historical groups: the Egyptians, Greeks, and Vikings. During Campaign mode you must move through history, but in the Skirmish and Scenario modes (basically quick-play) you can choose any group from the get-go. Mythologies plays out using familiar genre tropes, including resource management, skill research, and roshambo army mechanics (light infantry beats ranged infantry beats spearmen, etc.). The game further divides army classes by whether or not troops are heroes, mythological monsters, or basic humans, and even these higher divisions have roshambo qualities. Luckily, the game constantly displays who is good against who or weak against what, so there’s no memorization necessary. There is a certain Pokemon feel to it. When your heroic ranged infantry troop attacks a mythological heavy infantry troop, you almost expect to see “It’s super-effective!”.

The three campaigns differ mainly by how each group acquires resources. Egyptians are pretty balanced in terms of troops/building cost and power, Greeks are expensive but powerful, while the Vikings are cheap but require large numbers of troops to be effective.

Another interesting aspect of the game is God Powers. Each group worships a pantheon of gods, and by building temples, you basically control a “God Power” resource (each group increases God Power differently). By stocking up on God Power (as you would crops or gold), you gain access to mythological monster troops, one-time-use God Powers that affect the entire battlefield, and the ability to “level up” your group.

God Powers are generally pretty bland, like increasing your crop production by 10% for two turns while the enemy’s crops go bad. And once you use a God Power you can never use it again during that campaign. But worry not—there are lots of God Powers to research, and if you’re having trouble winning a match, there’s no shame in calling on the awesome might of Athena, Loki, or Ra. But it’s the mythological monsters that are most useful; seeing a map populated with big bad critters is pretty kickass, although you’ll quickly learn which ones are useless and which ones are powerhouses.

The game is played on a grid and is turn-based. During your turn, you can move and attack (or build) with each of your units. Heroic troops have Hero Powers that can be used multiple times, but must recharge for several turns before another use. If you make a mistake, you can just undo the move and start again (which is very helpful). Before you confirm an attack, the computer will tell you whether it’s a good idea or not (also helpful).

Often, many tiles will be blacked or grayed out due to “the fog of war.” If you move a troop into the blackness, the area around them will be cleared up. It’s irritating when two thirds of the battlefield is obscured, and powerful enemies start encroaching on your tiny little island. There are, of course, God Powers that briefly pull back the veil should you require some help.

Control can be a bit of an issue. There are times when it seems like the developers couldn’t decide between an all-stylus option and an all-button option. They tried to cram both together and the result is a little awkward. Menu navigation works great with the stylus, but moving troops is best left to the face buttons. There is no way to zoom out and see the entire battlefield save a sketchy geometric map displaying icons representing basic army positions. Happily, a lengthy but detailed (and much appreciated) tutorial will guide newbies through the gameplay.

The multiplayer options are very impressive indeed. You can host a game locally with up to three friends in two different ways: the normal wireless way and the “Hot Seat,” in which up to four players pass around a single DS and conduct their moves. The game even blacks out the map between turns! Mythologies also supports DS Download play.

The Nintendo WFC options are pretty standard: friend code or complete strangers. The very fact that all these options are available is excellent. Unfortunately, I couldn’t find anybody to play with over Nintendo WFC, so I can’t speak to its playability. Hot Seat games are fun, even though I only played with one other person. Mythologies offers a bunch of achievements which you can use to buy unlockable content including new gods to worship, new units to deploy in quick-play mode, and new quick-play and multiplayer maps.

I was really surprised by how much content Age of Empires: Mythologies contains, and the game itself is fun and inventive. Even the multiplayer options have more legs than most other DS games. Strategy fan or not, this is one DS game everyone should try.

Battle animations are simplistic but lively. The developers didn’t skimp on troop sprites—no color-swaps between campaigns. Everybody looks different, which is great. The static battlefields themselves could use some sprucing up, though.

The music loops a little too often. This complaint is balanced out by excellent voice sampling. Every time you move a troop or attack, then verbally acknowledge the action.

The stylus is excellent for menu screens, but not troop movement. It can be a little wonky when selecting troops or where you want to move them. You can (and probably should) play the entire game with the face buttons. However, the consequence is that moving around the battlefield grid is much slower using that method.

Even though your goal for any individual mission is pretty simplistic (destroy all enemies, survive so many rounds, don’t let your heroes die, etc.), no two battles are alike, and you will face a wide range of challenges. Figuring out the strengths and weaknesses of the three groups (Egyptians, Greeks, and Vikings) adds another level of strategy.

With a wealth of solo player options and just as many multiplayer offerings, this DS game will last you a long time, especially if you’re going for achievements and unlockables.

I don’t typically like strategy games, but this one caught me totally by surprise. It’s at least worthy of a rental for those that aren’t strategy fans, and genre fans should run out and pick it up right away. 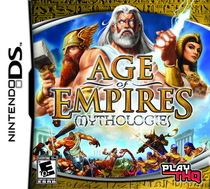