The Trackmania series moves from the PC to the DS, and is scaled down accordingly.

PC gamers that use Valve's Steam distribution system are no doubt already familiar with the Trackmania series. Trackmania United Forever is one of its most popular titles, featuring easily accessible car racing both online and off. Nadeo has entrusted the DS port to Firebrand Games, creators of 2007's Race Driver: Create and Race. The two games are quite similar, but Trackmania DS feels a little stripped down by comparison. While there's a plethora of single and multiplayer game modes and a track editor, Trackmania's lack of online play makes it fall short of its potential.

Like its PC big brother, Trackmania DS has you piloting a race car through various types of courses to achieve particular goals. The primary single-player game modes are Race, Platform, and Puzzle. Race has you trying to get the best time possible in Stadium, Desert, and Rally tracks. Platform tasks you with making it through to the end of obstacle course-style tracks in as few tries as possible. Puzzle has you assembling a track out of its pieces and then racing on it for a best time. Other single-player modes let you race randomly-selected tracks or play your custom-made tracks. There's certainly a lot of content to keep racers busy.

Trackmania's multiplayer component is fairly robust as well. Hotseat lets up to eight players pass a DS around as they compete to get the best time on a series of tracks, with configurable option such as the number of tries for each player or a preset time limit. Multi-Card Play lets two to four players (who all own a copy of the game) compete against each other for the best time on a single track, a target score on a single track (with points based on your place), or a target score for a series of tracks. Single-Card Play lets you play these same three modes, except the challenge options are limited and aren't as configurable.

The absence of online play in Trackmania DS is a puzzling omission on two fronts. First, the original PC game earned its good reputation by being one of the slickest and most accessible online racers available. The "United" in the original's title refers to the fact that you can easily play against gamers from nations all over the world at any time of the day. Second, we already know that Firebrand is fully capable of creating an online-capable DS racing game, since they've already done it with Race Driver: Create and Race. Why online play is not included in Trackmania DS, especially since it would fit the game perfectly, is a mystery.

In terms of gameplay, Trackmania DS is a solid if unspectacular track racer. The focus here is on quick-burst gameplay, with most tracks taking between twenty to thirty seconds to complete in their entirety. To make things even quicker, the X button takes you to the last race checkpoint, and the Y button restarts the race entirely. This makes Trackmania DS an excellent on-the-go, pick-up-and-play experience. There are more than one hundred built-in tracks, and players can earn bronze, silver, gold, and Firebrand medals in each in order to earn more coppers, the game's currency. Coppers can be used to buy new car skins, new track pieces for use in the track editor, and new tracks to race on.

The D-Pad is used to control your car (the stylus is not used for racing), while the A button accelerates and the B button applies the brakes. The three different types of tracks each feature a different vehicle, with each one handling differently. Stadium tracks feature a curve-hugging F1-style car that's low to the ground; Rally tracks have a compact car that handles slowly but surely; and Desert tracks use a four-door sedan that handles loosely and is prone to oversteer, but is great for corners if used correctly. The different control styles give each track type its own flavor, calling on the driver to hone different skills in order to achieve success.

While the racing is fairly tight, the camera is problematic. You can rotate through three different camera angles using the Select button, yet none of them feel exactly right. The bumper-cam is too low to the ground, and the zoomed-out and mid-level cameras both make taking jumps difficult. Certain tracks launch you high into the air, causing the camera to pitch upward along with the nose of your car and making it impossible to see the track below. This gets frustrating when you're racing the computer on a track for the first time, since you'll inevitably land just as you're going into a blind curve and have no time to react. You can mitigate this issue by knowing where to land, but that's only after you've failed a few times and have become familiar with a course via trial-and-error.

Trial-and-error is actually a large element of the gameplay in Trackmania DS. Each track requires a perfect run of sorts. This goal can be either enticing or annoying, depending on the player and situation. On the one hand, its old-school addictive nature plays to the perfectionist in all of us. On the other hand, there are plenty of times when you'll get tired of your computer opponent miraculously squeaking by you at the end of race, despite the fact that you've executed flawlessly...but not flawlessly enough. Grazing the side of the track even once is typically enough to necessitate a full restart. Some will gravitate towards such a challenge, while others will be turned off entirely.

If the single-player and multiplayer modes get old, you can always create up to sixty of your own tracks and share them with friends locally. The track editor is excellent, a very powerful tool that will have you racing on your own creations in no time. There's a little bit of a learning curve in terms of controlling the camera and moving pieces around, but once you get the hang of things you'll be off and running. As previously mentioned, the editor is also deftly incorporated into Puzzle mode by having you connect the beginning and end points of a track with the pieces you're given, and then having you race through it. As well as being a fun mash-up of the game's different features, it serves as a great introduction to the editing functionality. When you're finished with your track, you can specify bronze, silver, and gold medal times, set the number of laps, and define whether it's a Race or Platform challenge.

The transition to the DS hardware has been fairly kind, since the PC version of Trackmania has relatively simple visuals. Each vehicle type is fairly detailed (especially the Stadium car), and while the tracks are generally plain, the individual pieces have enough variety to keep the player interested. The different vehicle skins look good and provide incentive for higher medal placement and more coppers. There's occasional slowdown when you're in a corner with another racer, but it's rare and doesn't affect gameplay; you can also get stuck inside the scenery if you go off-track, but a quick track restart solves this problem easily.

Firebrand Games had a tall order to fill in bringing the Trackmania franchise to Nintendo's handheld. It succeeds on certain levels, retaining the pick-up-and-play charm of the PC version and providing a ton of tracks and challenges for players to tackle. Its track editor is also a triumph, and its incorporation into the game's Puzzle mode and multiplayer component is brilliant, extending the life of the title and providing gamers a reason to come back. Unfortunately, it falls short of its potential due to an irritating game camera, a sometimes-frustrating difficulty level, and a baffling lack of online play. Trackmania fans will find a fair amount to like here, as long as they realize that the package comes with some notable limitations.

Trackmania DS features clean graphics that, for the most part, successfully mimic the minimalistic presentation of the PC version. The cars look good, and the buyable skins are cool as well. Some of the track textures are ugly, but each track features lots of individual pieces that provide some variety.

There's a minimal amount of racing sound effects and some upbeat techno-ish music, but nothing particularly memorable.

There are three types of cars, and each one feels a bit different. It definitely requires some skill to navigate each course, but it's rewarding when you get it right. The stylus is used effectively in the track editor, and while there's a learning curve, it does the job well.

It's a faithful representation of Trackmania gameplay, but the camera tends to get in the way during jumps. The need to pull off a perfect run just to have a chance of the computer (especially when challenging for gold medal times) is also annoying, turning the slightest mistake into certain doom. It's still addictive and great for shorts burst of gameplay, however.

The game features over a hundred tracks and four different levels of medals for each, three different single-player modes, wireless multiplayer, and a track editor to create tracks to share with your friends. There are hours and hours of fun to be had, but the omission of an online mode really hurts.

Trackmania is easy to pick up and play and has lots of different modes and challenges, whether you're by yourself or playing with friends. Die-hard Trackmania fans will appreciate some aspects of this DS version, but will also be disappointed by its untapped potential.

Thanks for reviewing this Lindy. What you said is basicaly my feelings on this game while playing the demo.Speaking of demos the demo is still up on the Nintendo Channel.

No problem man.  I'd love to know why online wasn't included...it looks like it's using the same engine as Race Driver: Create & Race, a game that lets you race online, and create and share tracks online.  Why they didn't put that functionalty into Trackmania DS is truly puzzling.

Yeah, it's linked in the review, I reviewed it.  That's why I keep harping on the online, because I don't see any reason why it isn't in there. 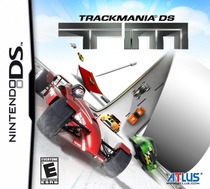