Pokémaniacs, get ready for another go-round with this swirling spinoff series—just don't expect anything markedly different.

Pokémon Ranger: Shadows of Almia continues the action-RPG branch of the Pokémon franchise begun by the original Pokémon Ranger for DS, reprising its essential premise and gameplay mechanics while making only a few significant alterations to that template. Hence, Ranger veterans will find little to distinguish their second experience with the series aside from the appearance of Pokémon made famous in Diamond and Pearl, while the gentle pacing and repetitive, reduced-form RPG structure may not endear it to many experienced gamers. However, the core concept remains a satisfying way of bringing the Pokémon world to vivid life, and underpinned by its accessible and amusing gameplay, Shadows of Almia offers a solid, if somewhat limited, experience for newcomers and Pokémon enthusiasts alike.

Over the course of Shadows of Almia, players assume the role of an aspiring young student on a journey from lowly trainee to top-ranked Pokémon Ranger, a transition that the game strives to confer importance upon with both its storytelling and how it paces the introduction of its play mechanics. The opening section of the game spans over two hours, and its duration is not a product of having to explain complicated controls or a convoluted story. Instead, Shadows of Almia emphasises living the life of a Pokémon Ranger. This involves talking to people, going on patrol, and even grabbing a nap at the Ranger station. Such tasks dominate the opening of the game as an introduction to the Almia region and the characters within it, and while this earnest approach may help draw some people into the world of Pokémon Ranger more deeply (likely younger gamers and/or those unfamiliar with the 2006 original), for others it may prove to be simply tedious without more substantial gameplay development occurring in parallel—especially given the incessant need to cycle through text.

Putting the same spin on the Pokémon concept as its predecessor, Pokémon Ranger: Shadows of Almia foregoes turn-based battling for stylus-driven captures; players rapidly encircle Pokémon on the touch screen to befriend them, which subsequently allows their abilities to be used (one-time only) for clearing obstacles and traversing the environment as you try to solve various Pokémon-related problems. Performing these actions is usually no more complicated than finding a Pokémon with the appropriate ability, capturing them with some rapid circular scribbling, and then drawing a line between that Pokémon and the relevant obstacle during exploration. This more visceral, involved approach to the business of capturing Pokémon is satisfying and fun, but it lacks the depth of strategy found in mainline Pokémon games. Its novelty becomes stretched severely by the game's repetitive nature, which is naturally an even greater concern for Ranger veterans.

One important tweak has been made to the gameplay in that captures no longer require continuous circling around Pokémon to be completed. When players lift the stylus from the touch screen to avoid taking damage from attacks, this only causes the capture meter to fall gradually, and isn't much of an impediment to success in most cases. Also, given that opportunities to recharge health are abundant thanks to the many helpful Pikachu (and relatives) to be found, all but the most careless of Rangers will find there's little danger of losing your progress most of the time.

All captures are graded, so skilful Rangers able to snag Pokémon with a single stylus flurry are rewarded with extra experience points, but careful manipulation is required only in the extended boss-type encounters. These powerful Pokémon frequently use deadly attacks that can spread across significant portions of the play area, so capturing them often involves waiting for the right moment, then suddenly drawing a burst of loops around the target—something easier said than done when that Pokémon can hop around at high speed, for instance. Pokémon in your company can help in these situations with assist moves based on their type, causing status effects such as reduced speed or temporary paralysis. Shadows of Almia includes a number of potential partner Pokémon to keep by your side, thus creating a minor strategic element in deciding which assist move will be most useful to have ready to use in various situations.

Though the touch screen captures are unquestionably the heart of Pokémon Ranger's gameplay, much of the game's duration is spent exploring the various environments of the Almia region and speaking with NPCs. Both traditional D-pad and touch screen controls can be used to guide your Ranger, which is a sensible choice since the stylus is often convenient given the frequent need to capture Pokémon, while the greater precision of the D-pad is occasionally welcome in more hazardous locations.

The exploration element of the game consists predominantly of leg work to find a sequence of Pokémon necessary to bypass the obstacles in your way, with the level layouts sometimes quite purposefully forcing heavy amounts of re-traversal in order to achieve this. Later in the game there are more interesting and involving areas, such as an aquatic maze filled with icebergs that must be navigated atop an Empoleon, but most of the designs feel uninspired or even cynical in their attempts to prolong the experience.

Provided that players can tolerate the lack of variety and abundance of filler material that characterises the Shadows of Almia experience to a large extent, the story-advancing missions alone provide an extensive amount of playtime, and are complemented by a number of side quests. Undertaking these optional tasks accrues modest rewards such as improved defensive stats and occasionally a new partner Pokémon, but these are so clearly detached from the strictly linear main quest that many will be inclined to bypass them for the most part. For those with access to the Nintendo Wi-Fi Connection, there are also a couple of downloadable missions that yield Pokémon eggs (of Manaphy and Riolu) that can be transferred over to Diamond/Pearl.

Viewed from a top-down perspective, the visuals are clean and colourful in 2D, with solid detailing and animation. The key difference in Pokémon Ranger's presentation from that of the series' mainline games is visible Pokémon, not only dotted around the environments but also constantly at your side, something sure to please Pokémon devotees. All the creatures also have their sound effects from Diamond and Pearl, providing a sense of those characters being brought to life, but this may still disappoint fans of the anime series' vocals. The soundtrack is tonally reminiscent of other Pokémon games, but comes up a little short thanks to less catchy compositions.

With its gentle pace and repetitive gameplay, Shadows of Almia is significantly dependent on its story to maintain players' interest in the game. Though the script is quite slick and able to generate a few laughs (from the ineffectually villainous Team Dim Sun in particular), this is still lightweight stuff that will struggle to really engage anyone not already invested in the world of Pokemon, and so it is the charm of that world and its many creatures that must carry the load. In this sense it can be said that Shadows of Almia is effective in servicing its target audience, but demonstrates little ambition to excel beyond those boundaries.

Overall, Pokémon Ranger: Shadows of Almia is a solidly produced title, but given its close resemblance to its predecessor and the lack of more substantial or dynamic gameplay and narrative elements, its appeal will be limited mostly to those Pokémon enthusiasts eager to see the creatures from Diamond and Pearl represented elsewhere. The boss encounters prove that there can be much more to the gameplay than indiscriminate scribbling, but these are a little few and far between to hold the interest of those not enthralled by Ranger's lively take on the Pokémon world, and that's after its inordinately slow start. Nevertheless, Shadows of Almia merits consideration for those amenable to the franchise's charms who have yet to try Ranger, as the core concept is still appealing and amusing, and it certainly can last for quite a while—it just spreads its content rather thin while doing so.

The clear and colourful sprite work may not be especially impressive, but it fits the Pokémon world perfectly, and the different locales offer some welcome visual variety. The Pokémon themselves are animated well during capture sequences as they attack and bounce around the lower screen, but they are predictably less expressive during exploration.

All the Pokémon come replete with their familiar sound effects from the mainline series, still including many 8-bit-sounding ones from the Blue/Red days for total authenticity and continuity. The soundtrack is familiarly cheerful, and equally undistinguished.

Touch screen recognition during the capture gameplay is very effective, allowing for some quite precise utilisation of the stylus when necessary in boss encounters. Using the stylus to guide your Ranger while exploring is convenient but not perfect, so the inclusion of D-pad controls is welcome even if switching between the two can be slightly awkward.

The core concept of capturing Pokémon using your stylus is a fun idea that Shadows of Almia executes well, for the most part. The extended encounters are uniquely tense and enjoyable as careful but rapid stylus strokes are required, and the advanced techniques that come into play (such as charging up energy and the use of Pokémon assist moves) spice up the otherwise simplistic gameplay. However, these are a disappointingly small proportion of the gameplay overall, which consists of routine captures and laborious exploration to a large extent.

Shadows of Almia will either last players a considerable length of time, or fall into disuse within its first few hours due to the protracted introduction that will surely test the patience of some gamers. Things become more interesting once the game gets going (though it never exceeds a fairly gentle pace), and with numerous side quests and a few downloadable missions to complement the lengthy main story, those who persevere will be rewarded with several hours of playtime. However, the linearity and overall simplicity of Shadows of Almia leave it with very limited replay value.

As a highly conservative follow-up to a two-years-old original, Pokémon Ranger: Shadows of Almia is hardly laudable as a work of creative expression, nor is it a breath of fresh air for those who enjoyed the first Ranger—a problem significantly exacerbated by the straightforward gameplay and plodding pace. However, it does make solid use of the Ranger template with some welcome tweaks and expanded utilisation of the franchise's vast Pokédex of characters, making it more than worth a try for Pokémon fans unfamiliar with the Ranger experience.

When it comes to Pokémon, I never do.

With its gentle pace and repetitive gameplay, Shadows of Almia is significantly dependent on its story to maintain players' interest in the game. Though the script is quite slick and able to generate a few laughs (from the ineffectually villainous Team Dim Sun in particular), this is still lightweight stuff that will struggle to really engage anyone not already invested in the world of Pokemon, and so it is the charm of that world and its many creatures that must carry the load. In this sense it can be said that Shadows of Almia is effective in servicing its target audience, but demonstrates little ambition to excel beyond those boundaries.

! WELL PUT! I've been struggling to describe how I feel about the game. In all honestly I think this is the games biggest drawback. The game feels like a saturday morning cartoon. Low level, whimsical plot where nothing really happens. The baddies get away, the hero was never really in any danger, everyone is cheerful and nice at all times. 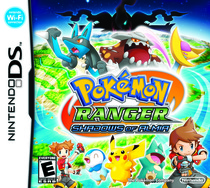