Pirates: Duels on the High Seas

A pirate's life? Not for me.

Pirates: Duels on the High Seas for Nintendo DS is a top-down action game that puts you at the helm of a pirate ship on a voyage for ancient treasure, blasting through fleets of enemies and sea monsters as you go. Built on strictly functional graphics and controls, Pirates' game design ultimately fails to deliver an experience dynamic or intense enough to maintain interest in its single-player story mode, while its technically-restricted multiplayer mode is a further let-down.

The meat of Pirates: Duels on the High Seas' content is its story mode, which tasks players with battling through (appropriately enough) seven different maritime locales in search of mystical keys. The rather thin plot is laid out between levels in a series of illustrations accompanied with generic pirate prose, but the artwork itself is of decent quality. During gameplay, 3D graphics are employed to present the action on the upper screen with quite effective results, though they lack appreciable textural and architectural variety across the various environments. The game usually runs at a reasonable speed, but the framerate drops noticeably in situations involving a relatively large number of enemy ships on-screen at once. On the touch screen there is a map/radar displaying the area around your ship, as well as a few touch-activated icons for the selection of enhancements to your ship's attributes.

The sound design is sparse to the point of desolation; without music to accompany the action during a level, there are just a few weapon fire effects and seagull noises left to carry the aural load. There is some music used in tandem with the brief story scenes between levels, and a quick fanfare for clearing an area, but otherwise there is no soundtrack to speak of. What little music is present is thematically suitable, if entirely uninspired and irritating to an extent limited only by how sparingly it is heard.

Your ship's controls are handled exclusively with buttons; the D-pad steers, while the shoulder buttons propel the ship either forwards or—curiously for a sailing vessel—backwards, while weapons are fired using the face buttons. With some practice, the controls prove adequate for manoeuvring your vessel in between obstacles and around enemies, if not with the highest degree of fluidity.

Though it may not afford your ship with great manoeuvrability, the deliberate nature of Pirates' control scheme comports with the dawdling pace of its gameplay design. Typically, you navigate through levels on a linear path, often at liberty to simply bypass enemies rather than face them down. Though sinking legions of hostile ships can be enjoyable in short bursts, combat is only necessary when a locked gate prevents you from progressing until, for example, you have destroyed all the ships in that particular area, which is usually a laborious task that quickly proves tiresome.

There are rewards for destroying enemy ships along your way, such as gold or new crew members that enhance your ship's abilities, but these appear with insufficient frequency to induce players to destroy a majority of the enemies that appear. Given what a joylessly repetitive task this would prove to be, this is perhaps for the best, but this fact does little to make those sections of the game spent simply cruising past enemies feel any less uninteresting.

When engaging in combat does become imperative, the intention of the game design is clearly for you to manoeuvre your vessel such that it can deliver devastating broadsides to your opponents while evading their fire. However, the enemy AI and balance of the game's statistics mean that such dexterity is seldom necessary to progress through the next gate. When dealing with smaller vessels, it is often quite safe to remain stationary, simply pumping out cannon fire until they sink. Also, the collectible sub-weapons can make quick work out of larger ships and cannon placements, but in their absence the process only becomes something of an exercise in tedium rather than tension.

Fighting the game's biggest enemies, such as a colossal battleship or a sea dragon, can require greater care and attention (though these battles are far from expertly choreographed). However, this is greatly diminished by the inclusion of an ability to continuously replenish your ship's health. The shipwright option costs only a relatively trivial amount of gold, which is fairly ubiquitous and can be stockpiled across levels. Combined with the fact that your ship is generally in little danger from the standard enemy boats, this low price for such a useful ability makes it all too easy to muddle through the bigger battles. It also renders the other selectable ability enhancements (such as greater range for your weaponry) practically irrelevant due to their comparatively meagre usefulness.

Simply put, the clumsy balancing of the game eliminates any potential for strategy or resource management to take on a meaningful role in gameplay, compounding the sluggish monotony that characterises Pirates overall. In particular, the level design sorely lacks creativity and diversity, boiling down to a simple series of rooms and corridors populated with the same recurring enemies over and over again. As a result, the fairly lengthy single-player campaign is unlikely to hold players' interest for a substantial portion of its duration.

Pirates: Duels on the High Seas does include another way to play: a battle mode for one to four players. Playing a one-player "Skirmish" is a lacklustre experience, as the deficient AI of the opponents renders these battles entirely uninteresting. While multiplayer therefore offers more promise, it fails to deliver. Firstly, the inclusion of single-card multiplayer on DS is always welcome, but its implementation here leaves much to be desired. Inordinate load times are a major drawback, and the absence of any extra AI opponents in the mix leaves the battles empty and uneventful (multi-card play may address these issues, but this could not be tested for the purposes of this review). More fundamentally, the deliberate nature of the gameplay is not conducive to the kind of immediate, intense experience that is ideal for battling with friends, and so the action ends up feeling rather pedestrian.

The flat multiplayer mode cements Pirates: Duels on the High Seas as a mostly respectable technical effort that simply lacks the requisite dynamism and ingenuity to satisfy as a game based entirely on action. Perhaps one could view the repetition and boredom involved here as a refreshingly unromantic take on the life of a pirate, but this does not make for a very fun game, leaving no compelling case to be made to add this one to your DS software library.

3D graphics provide a clean, solid look to the action, but the framerate is prone to slowing down on occasion, and the lack of variety amongst environments makes them feel like little more than palette swaps. The artwork used for telling the game's story between levels is attractive and atmospheric, but entirely divorced from the in-game proceedings.

There is quite simply very little to speak of in this category. A captivating soundtrack could have done much to make the repetitive gameplay more palatable, but instead there really isn't one present at all. The battle sound effects are passable, while the jingles and fanfares for collecting items and such are simply annoying.

Pirates utilises a traditional D-pad-based scheme, and performs acceptably within these restrictions. Your ship will not be able to weave around tight spaces with the greatest of ease, but this is consistent with the deliberate pace of the gameplay.

While the basic act of blasting enemy ships can be briefly entertaining, Pirates' game design fails to parlay this into a sustained, compelling experience. The naturally slow pace of the game is simply drawn out over several levels with little in the way of variety or strategic imperative to prevent players from becoming disinterested, and some truly baffling balancing decisions undermine what care has been taken to craft tense battles.

In theory, Pirates comes replete with the kind of features (a lengthy single player quest, a multiplayer mode) that can keep a game card housed in your DS for quite some time. In reality, the repetitive nature of the story mode means that the enjoyment to be had is exhausted quite quickly, and the weak single-card multiplayer does little to salvage matters.

Pirates: Duels on the High Seas has some of the pieces in place to be a solid action title on DS, but fails to measure up due to the shortcomings of its game design. Cookie-cutter levels, uninspired enemies, and disastrously executed resource management elements leave the one-player game adrift, while the multiplayer mode does not provide the quick and easy thrills required to buoy this particular sinking ship.

Was expected after the panning the Wiiware game got. 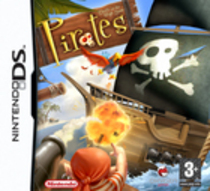