I get by with a little help from my friends.

It might not be correct to say that the DS is starved for RPG’s, but compared to its predecessor’s impressive library, one might say that the current selection is meager. Well, leave it to Atlus to fill that role-playing void, with a new entry in their pseudo-Tales franchise, Summon Night. This newest iteration chucks traditional turn-based fighting and implements real-time battles. While the game has its flaws, Summon Night: Twin Age is a deep, involving RPG that fans of the genre will have a hard time putting down.

The story concerns two youngsters, Reiha and Aldo, who live on a small island outside of human influence. The island is populated by a race of elf-like humanoids called the Kascuza, who were forced onto the island during a war with humans ages ago. One day, the spirits of the world begin acting up, as though frightened and injured, and monsters begin popping up on the island. Reiha and Aldo, along with many allies who they gather during the course of the game, are out to discover the cause of this imbalance. I can’t give too much away, but the story is typical anime fare. The main characters of course can’t remember their childhood, which becomes a pressing issue as the game continues. Aldo isn’t even really human—he’s a "Summon Beast" from the spirit world. The characters are your usual cut 'n' paste RPG far, too. There’s the condescending tough guy, the easily-flustered princess, the exiled teacher, the tough girl who’s soft at heart. I think I’ve played with these characters before. Oh, that’s right, in Tales of Symphonia!

Clichéd though the story may be, Twin Age offers deep combat and customization options. You can switch freely between Reiha and Aldo at any time during quests, and they each have their own strengths, weaknesses, and skill trees. And let me tell you, the skill trees are impressive. Aldo, for example, grows differently depending on which weapon (sword, axe, spear) you prefer. Reiha, the resident magic-user, gains elemental blasts and recovery abilities. Each distinct skill can be upgraded several times, and you don’t have to buy every skill that becomes available. Rather, the higher your experience level, the more skills are unlocked. You can choose to upgrade the ones you have or buy new skills. I was reminded of the skill tree options from Diablo II.

In addition to skills, you can customize the weapons and armor of Reiha and Aldo. Defeating enemies and breaking boxes on the field results in money and/or materials. These materials are used to upgrade your weapons, create recovery items, manufacture new armor, or spawn Summon Beasts. The latter are used basically as items, and depending on the amount of required material you have and the "support" rating of your allies, you can spawn up to three of any one Summon Beast. Of course, these creatures have unique elemental properties, so bringing the right Summon Beast to a certain level can really help you grind through it. Unfortunately, you are unable to take control of the many allies you collect through the game. On the one hand, this limits the amount of time you have to spend worrying about equipment and who gets what. However, I don’t really like the fact that Nassau, your first companion, has fixed HP and MP amounts, and that his equipment will never change. If he learns new skills or gains more stats every time he levels up, it’s passive and unknown to the player. Because I had absolutely no control over his actions or equipment, I spent more time worrying about Nassau than I should have. That might just my own personal OCD creeping in, but even being able to see a status screen would have been nice.

Like the skill trees, the combat system is surprisingly Diablo-esque. You point and click with the stylus to tell your character where to go and who to fight. Support characters fight on their own but generally follow your lead. Two customizable pull-down menus (called Command Palettes) let you assign different spells or recovery items to different spaces on the palette, so it’s just a matter of tapping a spell, then tapping the target enemy to toss a fireball or use a killer sword combo. It’s simple and intuitive, and as a result, combat is fast and satisfying. And the touch screen commands for certain spells are kind of cool, like drawing a line in the ground for a wave of fire, or tapping a series of enemies rhythmically to use a multi-strike combo. Mostly, though, spells consist of tapping either an enemy or an ally. The only hiccup in the system is that support characters tend to blow their MP on things like needless recoveries or stat boosts in areas without monsters to kill. You can, to a limited degree, assign behaviors to your support characters, but it’s easier to just let them blow their MP once and awhile as long as they use it when it’s really necessary. Besides, it’s not like recovery items are hard to come by.

The game doesn’t look all that great. Honestly, it looks like a GBA game. There are no impressive particle effects or 3D character models. Everything is sprite-based, and enemy sprites have very few animations. Enemies tend to repeat with different color schemes, and the triplets in the Shop look like ducks until you see their character portraits. But for a sprite-based world, Twin Age looks very much alive, with unique vistas and great character designs. Some of the boss monsters are awesome, too. The sound is impressive, and it's probably where the DS hardware is put to the best use. Almost every unique level has its own theme, and there is limited voice work during cut-scenes (more on that later).

There are a few flaws in the game’s design, however. First off, with a few exceptions, I never really felt underpowered or overwhelmed. Recovery items are a dime a dozen, and having enough money to buy better weapons is rarely an issue. Level-ups occur fairly frequently, and it doesn’t seem to matter whether you play as Reiha or Aldo, as both are equally prepared for battle. There are a few times where grinding through a specific level multiple times might produce better stats for the next area, but that’s a rare occurrence. Despite my worrying about them, the support characters can certainly hold their own against mobs of villains, and if you have a trio of Summon Beasts on the field with you, you’re essentially unstoppable.

I also don’t like how the story sequences progress. Whenever the plot unfolds, character portraits talk to each other. Now, what I like is that there’s really a lot of voice work. It’s not like actors are reading entire scripts, but things like “What?” or “Hey!” and in some cases whole sentences are read aloud, so that’s cool. However, I don’t like watching two talking heads stare at each other while dialogue scrolls across the screen. And it’s not like there’s a better way to do it on the DS, but some of the conversations are just so long that it begins to grate. More action, less talking! What’s really horrible, though, is that none of these sequences are optional. You can’t press Start and go right past the story sequence. So there are times where a big long story sequence occurs before a boss fight. If the boss kills you, you go back to your last save point and have the pleasure of tapping through the same big long story sequence again!

However, neither of these flaws really break the game. Indeed, the first complaint, regarding your party’s near invincibility, may appeal to you. It’s nice to not have to grind all the time, I suppose. And the story sequences are more a larger symptom of the genre, rather than the game itself. No matter your feelings regarding RPG’s, Twin Age is a deep, very enjoyable game.

Twin Age wouldn’t look out-of-place on the GBA. Sprite-based graphics are not necessarily a bad thing, but I expect more out of the DS by now. At least the characters are well differentiated, and the environments are impressively varied.

All of the unique musical tracks are enjoyable, and the inclusion of clear voice acting is impressive and appreciated.

Everything is done via the stylus. On the field, it’s all point-and-tap, just like Diablo. Casting spells couldn’t be easier thanks to this system.

Aside from the overly-long cut-scenes, the gameplay is solid. The skill tree management and field controls are reminiscent of Diablo. You don’t have to worry too much about grinding, and new weapons are available surprisingly often.

There are plenty of sub-quests, but the main game doesn’t last that long by RPG standards. It’s no Pokémon or Dragon Quest. On the other hand, you can choose whether to see the plotline through either Reiha or Aldo’s eyes at the beginning of the game, so while you don’t really get two distinct plotlines, you do get slightly different takes.

I like this game, and I usually don’t really care for RPG’s. Despite the monotonous cut-scenes, Twin Age is incredibly fun, and if you’re a fan of the genre, this game is a no-brainer. But even if you don’t really like role-playing games, Twin Age doesn’t burden you with the length of Dragon Quest, the ridiculous stat-tracking of Pokémon, or the equipment nightmare of something like Final Fantasy. At the very least, Twin Age is worth a rental.

I'd get it if it was released here. I think none of the Summon Night games ever got a European release though... 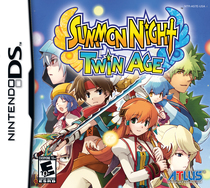