The only game that advertises power-sliding into water towers, and doesn't deliver!

The first thing that struck me as peculiar about Ubisoft's Emergency Heroes was during the opening cinema. Despite the fact that it isn’t quite a cinema scene, but more of a random assortment of things that might or might not happen in the game, there is a sequence in which one of the emergency vehicles - a futuristic police car to be precise - power slides into a water tower. Heck, even the fact sheet Ubisoft sent with the game mentions the ability to power-slide into a water tower. Color me disappointed, as not once did I ever power slide into a water tower, and letdowns like these are why Emergency Heroes fails.

The setup is pretty simple. You control Zach Harper, a former cadet of the futuristic Emergency Heroes team. Zach has an uncanny talent for driving, but never finished his Emergency Hero training due to his role in a training exercise that led to the alleged death of a fellow cadet. Following an overwhelming outbreak of the same four problems (criminal drivers, traffic jams, fires, and people trapped by fires), the tough-as-nails Captain Walters is left no other choice but to call upon Zach for help. With the help of some random Asian woman, Zach aims to save the day. What follows is a series of the same four disasters over and over again with three story sequences that are predictable and laughably bad.

Despite the poor, cliché-ridden story, Emergency Heroes initially strikes you as a potentially fun title. It appears to be an open world game, but the “open world” is actually a futuristic-looking city in which you drive a car around to missions and occasionally encounter a brief mini-mission. There are four basic mission types: Chase, Fire, Rescue, and Clearance. These four missions represent the game. Not just the bulk of the game, or a part of the game; these missions are the entire game.

The Chase missions are the ones that are the most involved. You use cop cars to hit dangerous drivers that seem to be horrendous ethnic stereotypes, or random femme fatales with tattoos. You have to hit their cars from the back, the left, or the right…but it only counts one side at a time. In other words, you have to hit the car four times on the left, four times on the right, and then twice from the back. This might not be so bad if the hit detection wasn't so terrible.

Rescue missions consist of a race through an area to get to a person in need who apparently lives in a rescue teepee. Players pick up the person in need, who apparently gets into your car by magic, since all you see is their annoying portrait that shows up to say witty things like "Ahh! I don't like fire!" (thanks a lot, Captain Obvious. Who the hell likes fire to begin with?). They must then race back to their starting point. There are some minimal branching paths involved, but other than that it is a straight-up race through a place that's on fire.

Speaking of fire, the Fire missions are almost exactly like the Rescue missions and are often in the same location. For example, there is a Marina Rescue mission and a Marina Fire mission. The two missions are almost identical except that one involves spraying water at fires while racing against the clock, while the other simply has you racing against the clock. This mission type has the potential for some strategy, but driving really fast and holding A to put out fires works just as well. And if you miss a fire, don't worry because every fire course loops around (in fact, there are a few fire missions that have you driving around in a circle for three minutes spraying recurring fires). There’s an attempt to spice things up by making some fires toxic, but it’s the same damn thing with greenish fires.

Ironically, the mission with the least heroic ideals is also the last one you encounter. The Clearance missions tap into everyone's basic instinct of liking to crash into things, having you drive a car with a giant battering ram on the hood through huge piles of exploding traffic so other cars can get through (I have to wonder how many people die when these so-called Emergency Heroes save the day).

The game also features a two-player competitive mode. It consists of seven different game types that are all very limited, essentially just ripping off the single-player missions. There are also some unlockables that you get as you progress through the game, but it’s mostly unnecessary concept art, new vehicle paint jobs, and new vehicles that all look and control almost identically aside from some size differences.

Emergency Heroes’ graphics suffer from a woeful lack of detail. The only positive result of this is that the game runs smoothly. Fortunately, its controls are intuitive and easy to use, employing the Wii Wheel rather well. However, there are some issues that make the oft-required sharp turns rather difficult. If you crash into a wall after failing to turn sharply, your vehicle might completely turn around and become trapped. I was constantly reminded of the scene in "Austin Powers: International Man of Mystery" in which the title character has a golf cart stuck between two walls, and tries going forward and reverse over and over again and can't get out.

Emergency Heroes feels very rushed since there's just not much to it. The entire game took me approximately four hours from start to finish, and that’s four hours too many for something as generic and repetitive as this.

Everything runs smoothly, but of course it'll run smoothly if it looks like an ugly GameCube game with a little bit of sheen.

The fact that there is full voice acting is impressive, even though it is written extremely poorly. The background music is generic, but thankfully not annoying (which is kind of a plus).

Emergency Heroes controls similarly to Mario Kart Wii - if every level in Mario Kart Wii was an ice level, that is. The actual controls are intuitive, but it’s almost impossible to make a turn at any high rate of speed.

It’s the same four mission types over and over until it's over.

Emergency Heroes is seriously about four hours long. There is a lot of unlockable content, but I don't know who will really care to see a pin-up photo of the main character, or drive their police car in black instead of white.

This game could have been a lot better if there was more to do. As it stands, it can be beaten in less than five hours without much difficulty, and it's really just the same four missions over and over again.

HA!  I was kinda pissy when I missed the chance to claim this game.  Glad to see I didn't get... "hosed"

HA!  I was kinda pissy when I missed the chance to claim this game.  Glad to see I didn't get... "hosed"

Well, at least it was 18 bajillion hours long like Pokemon Mystery Dungeon...
Comparatively so, this review was actually fun to write.

This had such potential to be Blast Corps. ... *sigh*

This had such potential to be Blast Corps. ... *sigh*

I would love a Blast Corps sequel. Perhaps it would be "hardcore" enough for the 360 crowd and Microsoft will green light Rare to make a sequel. 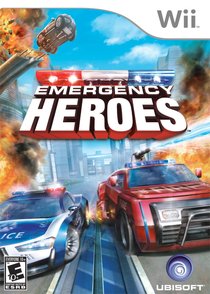