Enjoyable, but not without its flaws.

The Crystal Chronicles series has a certain stigma about it. It was one of the pillars of Nintendo’s Game Boy-GameCube connectivity push, and while most fans agreed that the concept was good, the barriers to truly enjoying the game as it was meant to be played were just too high. Few people had access to four Game Boys, four link cables, and a GameCube to use for playing it. For those that did (like me), the game wasn't quite good enough to make the trouble worth it. When Ring of Fates was announced, it made perfect sense: the DS’ dual screens would accommodate both the personal map/inventory screen and action screen, and the Nintendo Wi-Fi Connection would allow great online partying, right? Sadly, these seemingly obvious improvements have been overlooked. However, Ring of Fates still survives on its own merits and makes me excited for the continuation of the series.

There are two primary game modes: multiplayer and story. Multiplayer is kind of a misnomer, since entering the mode allows you to either form a party with other people or play by yourself. Forming a party works only over local wireless, and only if all players have a copy of the game. This sounds vaguely similar to the hoops you had to jump through for the GameCube game, doesn't it (in fact, excluding the cost of hardware, it's arguably more expensive)?

Multiplayer mode begins by asking you to create a player to represent yourself. You'll immediately be hit with a very limited set of customization options. You pick one of four races and what sex you want your character to be, totaling only eight different character variations (actually, make that seven, as male and female Yukes apparently look the same).

After setting up your character (and forming a party if you are playing multiplayer), you can select a level in which to play. Levels are essentially puzzle and enemy-filled dungeons. Players work their way to the end, defeat a boss, pick up the loot, and get zapped back to the overall map. Between dungeons they can go to the one main town and have their loot crafted into items, armor, and weapons. As levels are completed, more levels of higher difficulty are unlocked. When all of the levels are completed (which won't take very long), previous areas can be played again at higher difficulty levels. Basically, monster levels are matched to player levels.

Party mechanics should play a huge role in a game of this nature, but it doesn't really matter in Ring of Fates. While different races have higher base stats in certain categories, any race can potentially take on any role in the party, as most armor can be worn by everyone and all spells can be cast by anyone. For example, any character will always be able to heal themselves, so getting a dedicated healer in your party is all but pointless. Each race is differentiated by a special ability. Most of these special abilities are used to reach seemingly unreachable areas. Yukes possess a magic power that allows them to transfer energy from magical pillars into invisible objects to make them visible; these objects are often moving platforms that allow the party to move on. Selkies can shoot arrows that allow them to hit otherwise unreachable trigger switches that open doors. The fundamental problem with this mechanic in the multiplayer mode is that the level designers could only use it to conceal hidden items, rather than requiring it to finish a stage, as parties will rarely be made up of every race in the game.

One of the main complaints players had about the original Crystal Chronicles was the inability to play single-player mode with computer-controlled party members. The the story mode in Ring of Fates gives those complainers exactly what they asked for, but as if it was lesson in genie wishing, they should have been more specific in describing what they wanted. The artificial intelligence in Ring of Fates is absolutely abysmal. Party members will often haplessly try and follow you around, even if that means falling to their death repeatedly or constantly walking over hot coals. On other occasions they'll completely refuse to jump up on a simple ledge, instead choosing to stop in their tracks and fall way behind. To combat this ridiculousness, the L button teleports your partners directly behind you. I found myself pushing this button almost as much as the attack button.

The simple act of walking around isn't the only task that computer-controlled characters have problems with. Getting them to actually help you out in a fight is nearly impossible as well. If they happen to be right next to an enemy they may actually attack them, but they will never cast a spell or use an item. This means that if you want your magic user to cast Fire on an end boss, you have to switch control over to him so you can do it yourself. Ring of Fates would have benefitted from a setup similar to the gambit system used in Final Fantasy XII; it would have been nice to set up some simple conditional statements (e.g. if a party member has less than 100 hit points, cast Cure on him) instead of being forced to manually control characters in this manner. Hopefully they'll use a similarly ingenious system in future sequels.

Ring of Fates does have its high points. Square-Enix seems to continually improve the visuals in their DS games. This game looks even better than past visual gems like Final Fantasy III. The writing for the story mode is also extremely well done. Cut scenes that feature full voice acting drive it along. Despite all of the drawbacks I've discussed, I enjoyed virtually every second of the single player experience. Bear in mind that it’s your standard fantasy RPG fare, with two magical twins setting out to avenge the murder of their father. The twins get their power from mysterious crystals that simultaneously aid them in their quest, but also cause monsters to roam the world. Overall, it falls in line with some of the best Final Fantasy stories to date and really gives the Crystal Chronicles series some staying power. The only downside of the story is its length. Do not expect one hundred hours of gameplay; you won't even hit forty. I completed the entire story mode in around twelve hours.

Many gamers still believe that the "Final Fantasy" in this game’s title is only there to trick unsuspecting shoppers into buying something unrelated to the rest of the the franchise. In response to that, Ring of Fates includes some classic-looking equipment along with familiar spell titles that clearly pay homage to other games in the series. One helmet and body armor combo makes a character look strikingly like Vivi the Black Mage from Final Fantasy IX, while another combination looks just like Kain the Dragoon from Final Fantasy IV. I had a great time dressing up my characters to look like some of my past favorites.

If you’re a fan of past Final Fantasy games and will appreciate the fan service of classic armor types and spells, Final Fantasy Crystal Chronicles: Ring of Fates will be an enjoyable addition to your collection. Sadly, Square-Enix still hasn't nailed the multiplayer component, and the obvious faults in its single-player gameplay will turn off most everyone else.

One thing Square-Enix knows how to do is make beautiful DS titles. The 3D world looks great and the cut scenes are wonderful.

Music and sound effects maintain the status quo. Voice acting in a DS game is unexpected and pleasant. A couple of the voice actors are absolutely terrible though.

Ring of Fates is the type of game that could really benefit from an analog stick of some sort. Maneuvering your character so that he is facing the correct direction to attack can be frustrating at times. The DS touch screen is used for some clever special abilities and menu navigation though.

The story mode is extremely short. After you finish it you are given the option of starting over while maintaining all experience and items. This can make for an entertaining second play through for hardcore fans, but may turn off more casual fans. On the multiplayer side, even if you do have enough friends to play together, there is only as much content as the story mode has so it won't last very long either.

A great story and entertaining amount of Final Fantasy fan service keep this title out of the gutter, but it is far from a must-own game. Renters could easily finish it in a weekend and save the price of admission at retail. 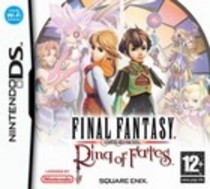