God is in his heaven and Tokyo is annihilated; all is right with the world.

It’s soon going to be time to close the book on the second ever Nintendo Switch presentation from January 2017. Atlus revealed Shin Megami Tensei V at that show in the form of a brief image trailer, only to not discuss the game for three and a half years. After playing through the game’s opening sequence, SMT V is definitely sticking to the series traditions of difficulty and demon summoning, but the onramp will be a lot smoother for those who are just looking for a good turn-based RPG.

One of the established traditions for the Megami Tensei games is that Tokyo is going to get majorly messed up, though Shin Megami Tensei IV on 3DS waited several hours to drop that storyline note. In SMT V, the “time to wrecked Tokyo” is about ten minutes. Once you get control of your player character, V immediately lays out the game’s systems in a concise fashion, going through the basics of building a supply of demons to help navigate the deserted area. Glowing icons known as “Leyline Fountains” serve as save points, healing areas (for a price), the game’s sole shop, and home to the Cathedral of Shadows where you can modify the party composition to an absurd degree. 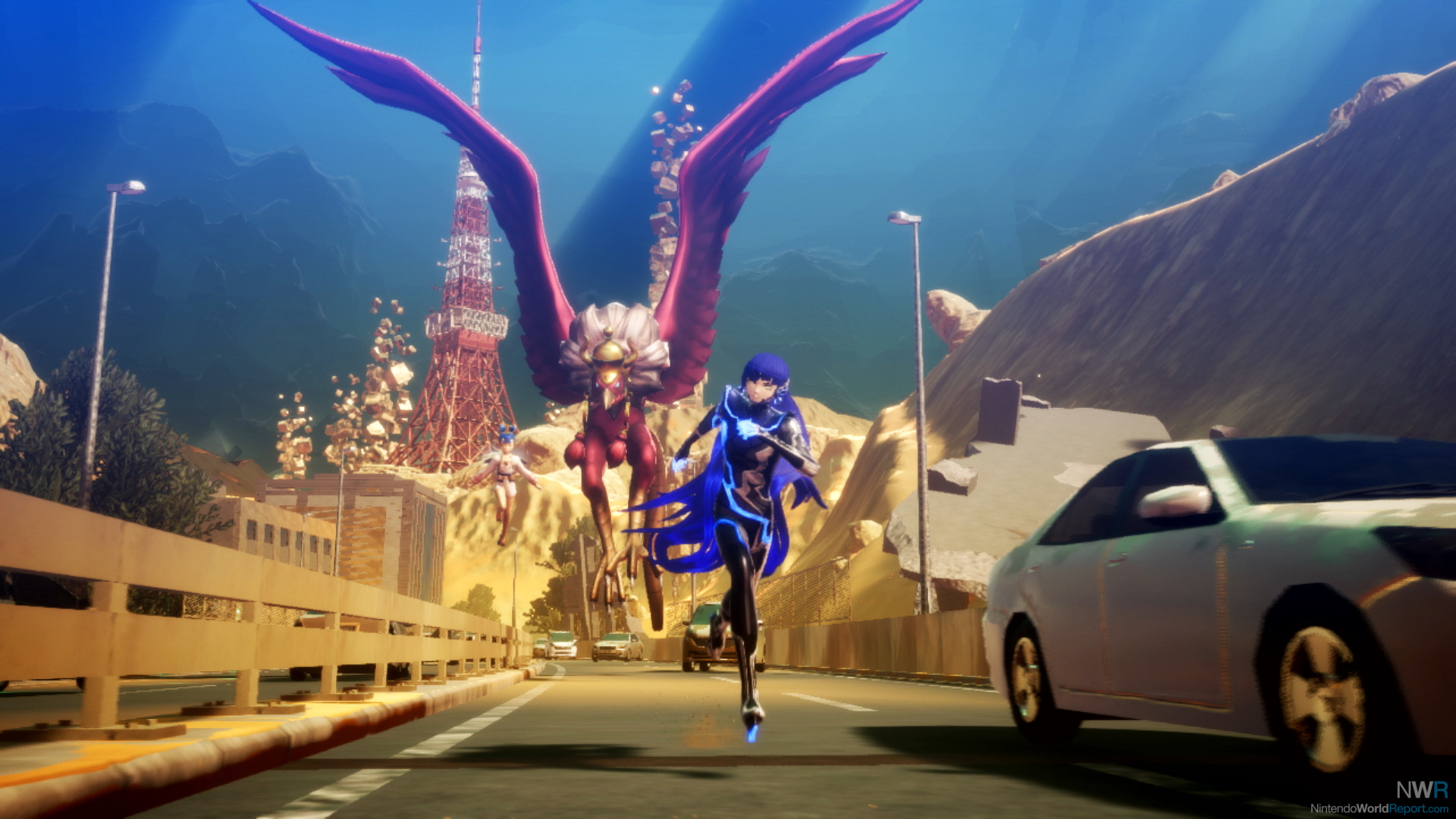 The tradition of blue haired protagonists apparently coming over from Tokyo Mirage Sessions.

The Cathedral lets you perform “Demon Fusion”, where the demons you recruit can be combined to create more powerful ones. There’s a natural limit in that you can’t recruit or fuse above your main character’s experience level, but if you’ve got the strength and the supply you can make some real hard ones. A newer touch is the ability to perform “reverse fusion”, where instead of picking two demons and seeing what comes of it you can pick the result if you have the requirements available. And blessedly, the skills are chosen from a list with no “rerolling” of the skills required. It’s even possible to fuse from the Demon Compendium, the game’s collection of summonable joys, though there is a price to be paid to summon from the Compendium. And if you have done any leveling of your party - which is recommended even on the Casual difficulty, the lowest option available in the build we played - that price could get out of hand quickly. (A “Safety” difficulty option is slated to be made available for free as DLC around launch; the other options we had were “Normal” and “Hard”, with no ability to move to Hard if not selected from the beginning.)

The combat system is a strictly turn-based affair, with the “Press Turn” system in use. The on-map encounters can be attacked to give your characters the first chance to move, otherwise it’s a coin flip to determine who strikes first. There’s one turn for each member of the attacking party, though critical hits and striking elemental weaknesses (from one of seven options) afford the attacker an extra turn. Likewise, having attacks miss or attacking with an element that is nullified or absorbed will cause a lost turn for the attacking team. It can be very easy to abuse this system; the game’s equivalent of a super meter called the “Magatsuhi” comes out of the box with the ability to make all of the attacks in the round critical hits. It’s not immediately clear why they also specify magic damage specifically, though recent games in this universe have had damaging spells with a chance to one-hit kill on a critical hit. If the protagonist uses the Magatsuhi on their turn, which always comes up first, you can very easily get eight hits for double damage; this will end virtually any fight short of a boss or a major numbers disadvantage. About the only thing balancing this is that the enemies can and will use it too, even in regular mook encounters. At that point, you better be able to strike a weakness to take them out or… death comes for you.

The protagonist will also have the option to build their skills; some monsters in the world will drop “Essence” items which can be used in the Cathedral of Shadows to transfer new attacks to your character. I did accidentally overwrite my character’s Agi (fire) and Zio (lightning) spells with a pair of healing spells when I didn’t intend to, though that’s on me for not noticing that those spells were missing from the list when I used it. Other modifiers come in the form of “miracles” which can also be purchased in the Cathedral and provide important modifiers such as the ability to recover HP and MP at a level up. Not all the way, of course, but I can imagine that a “full recovery at level up” or even a “full recovery after battle” is a few miracles away. One miracle I am hoping for is “additional money for winning a battle”: it takes 7-9 battles to get enough money from battles to buy a single revival item in case things go sideways. There are a few items that can be found in vending machines (???) and sold for cash, but they’re not too common.

A lot of these elements are probably familiar to those who played this year’s remake of Shin Megami Tensei: Nocturne or the 3DS’s SMT IV. But given its place as one of the year’s major exclusive releases for Switch, it has the potential to attract a lot of new players given the Switch’s propensity for shattering sales records. Here’s hoping it holds up as we get further into the Tokyo ruins.

A code was provided by Atlus for this preview.