Actually, I prefer the air.

The Falconeer caught my eye a couple of years ago before it was announced to be an exclusive title for the PC and Xbox. When playing it at a gaming event back then, I caught myself thinking: “This game would be perfect on Nintendo Switch, but it will never be able to run this.” Turns out, I was catastrophically wrong on that last point, because thanks to an early copy of the game I’ve been enjoying The Falconeer for the last week or so. It turns out that I was indeed right all those years ago. The Falconeer feels perfect on Switch. 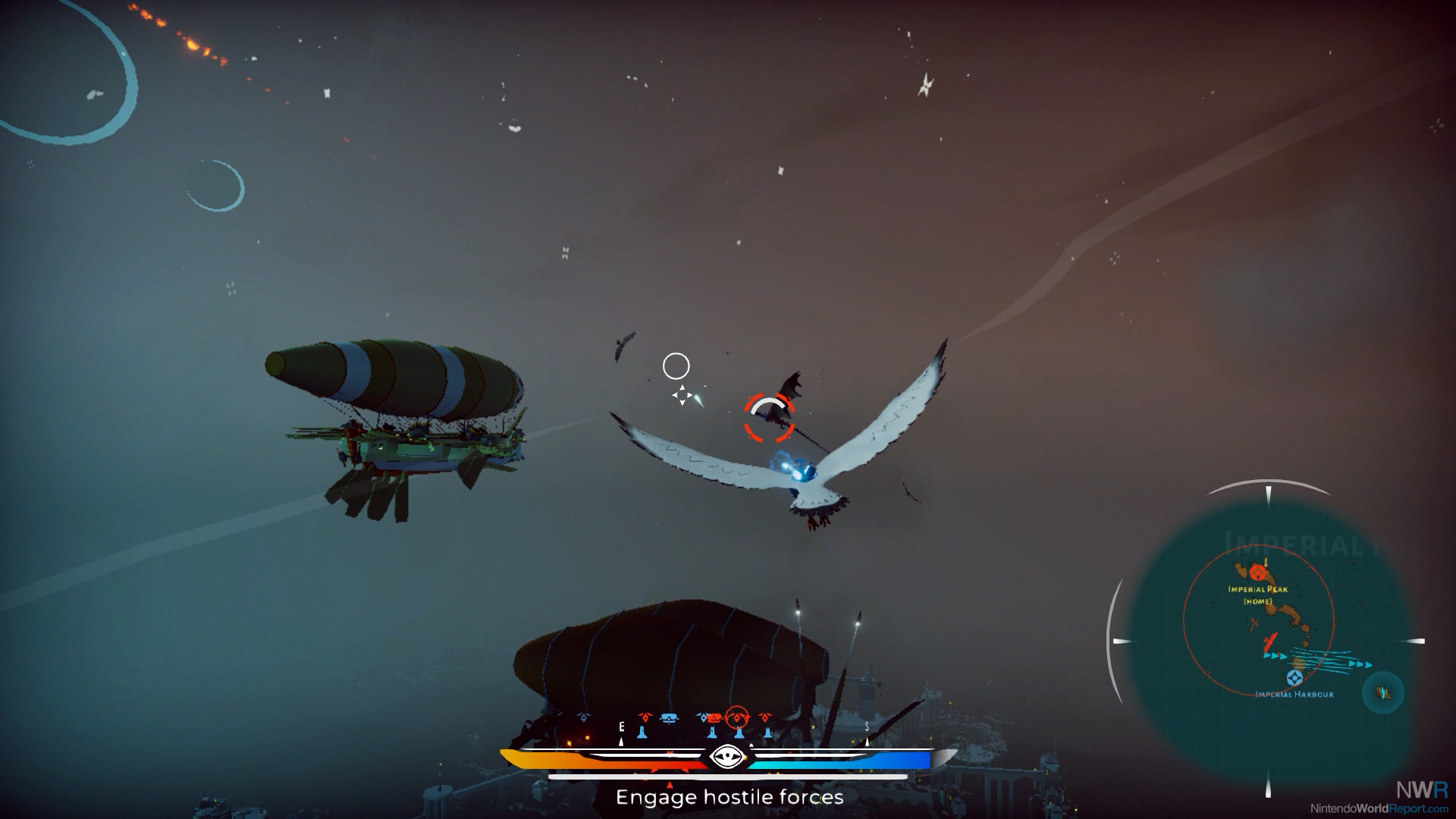 In a mystical land known as the Ursea, you play as a Falconeer: A human able to ride on top of giant winged beasts called warbirds. Some of these look like falcons, but other options are also available like wyverns and eagles. The Ursea is divided into different factions that control small islands spread out across the nearly endless ocean. You aren’t just playing as a singular falconeer, but throughout the different chapters you experience the story from different points of view. While the main missions start out with the basics, you gradually get involved in different combat, escort, delivery, and rescue scenarios in which you master your bird and hone your skills as a true warbird fighter.

The core of the gameplay is definitely familiar for people who’ve played aerial dogfighting games before. The unique gameplay consists of gaining altitude and speed during traversal and combat. On the bottom of the screen, you find a compass and a health bar, but also a speed meter in blue. Using the L-button, you can feel the need for speed by flapping your wings to gain height and speed, but also perform tricks like aerial rolls. Using these maneuvers drains the meter, but it can be refilled by making a slight dive downwards from up high. I found this system to be incredibly dynamic. Unlike aerial combat games, where managing fuel isn’t as important as outflanking your opponents, in The Falconeer there’s always this tightrope balance of keeping your speed meter filled and timing your movement just right to refill it during combat. 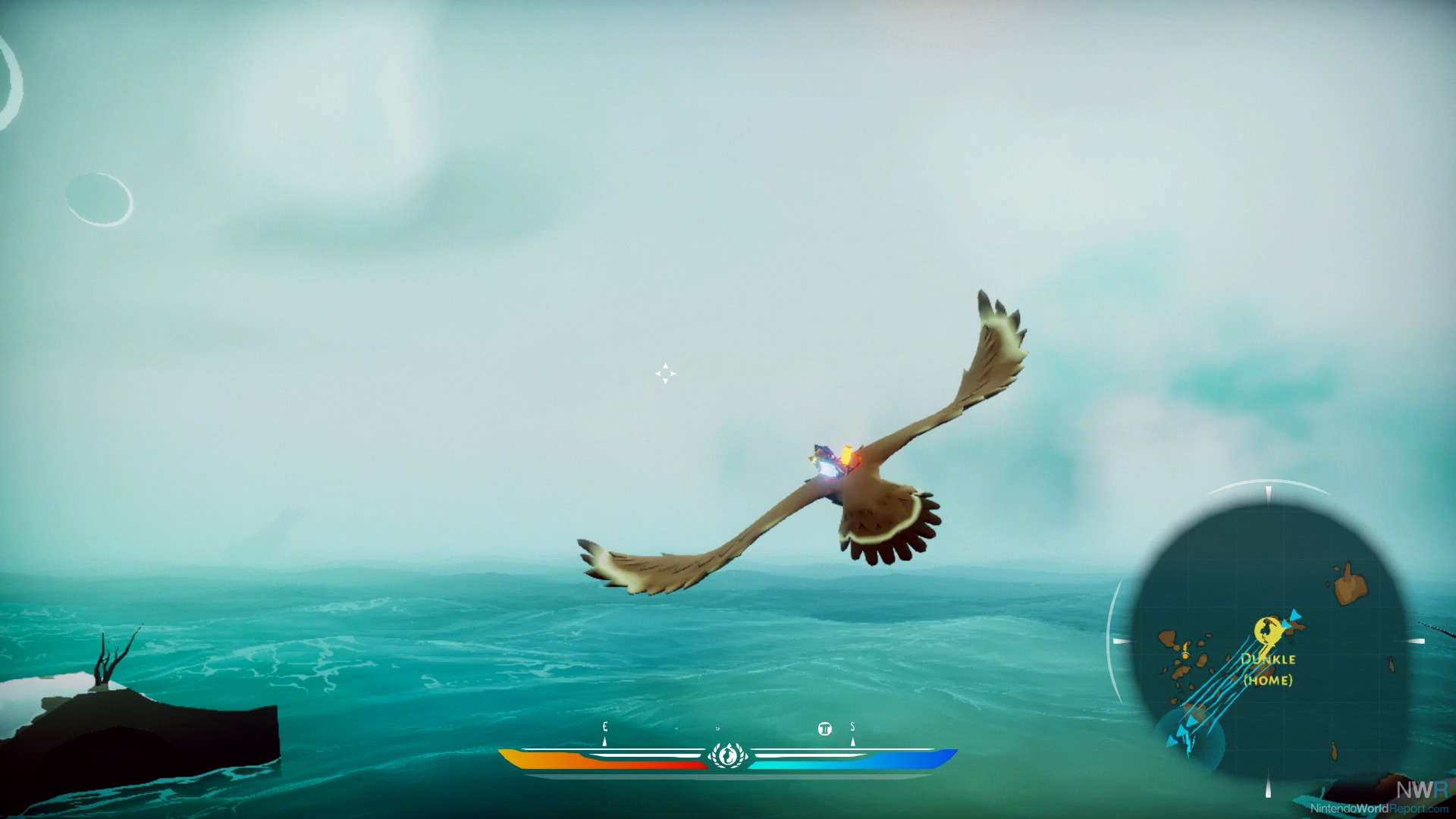 Combat itself can be pretty straightforward. You fire standard bullets with the trigger and are also capable of unleashing a heavy attack that deals a lot of damage but recharges slowly. Ammo itself also needs to be refilled, which is done by flying through thunderstorms. There’s a chance you can even overload your pots that contain ammo, requiring you to dive into the sea to prevent your bird from catching fire. It seems like every mechanic from a dogfighting game has been closely examined and reworked to figure out how to keep players on their toes while traversing this world. I liked how the lock-on system feels pretty generous, targeting enemies from relatively far away, but at the same time it still required me to make sure I would not end up getting caught in the line of fire myself. In fact, certain story missions require you to carry cargo and avoid combat from pirates and competing factions.

The one thing that did put me off was the world and the worldbuilding within the game. While playing for the first hours, I really had a hard time following along with the story and the world itself. This is because the game doesn’t feel the need to explain everything in great detail and gives you the presumption that the Ursea has been around for a long time. This is fine, but unlike other games, where the story gets more elaborate and fleshed out over time, so far The Falconeer still feels rather flat. Its characters, especially in the first chapter and the faction of Dunkle, talk in over-the-top, almost caricature-like, voices. Imagine if the world and characters from the How to Train Your Dragon movies took themselves completely seriously. It’s not a bad world to explore, especially with the smattering of stunning visuals, but it did not lure me into its world by presenting me with a specific story I wanted to know or a mystery I would like to solve. After a couple of hours I did understand better what was going on and what my role was in the game, but the barrier of entry feels pretty steep on that end. 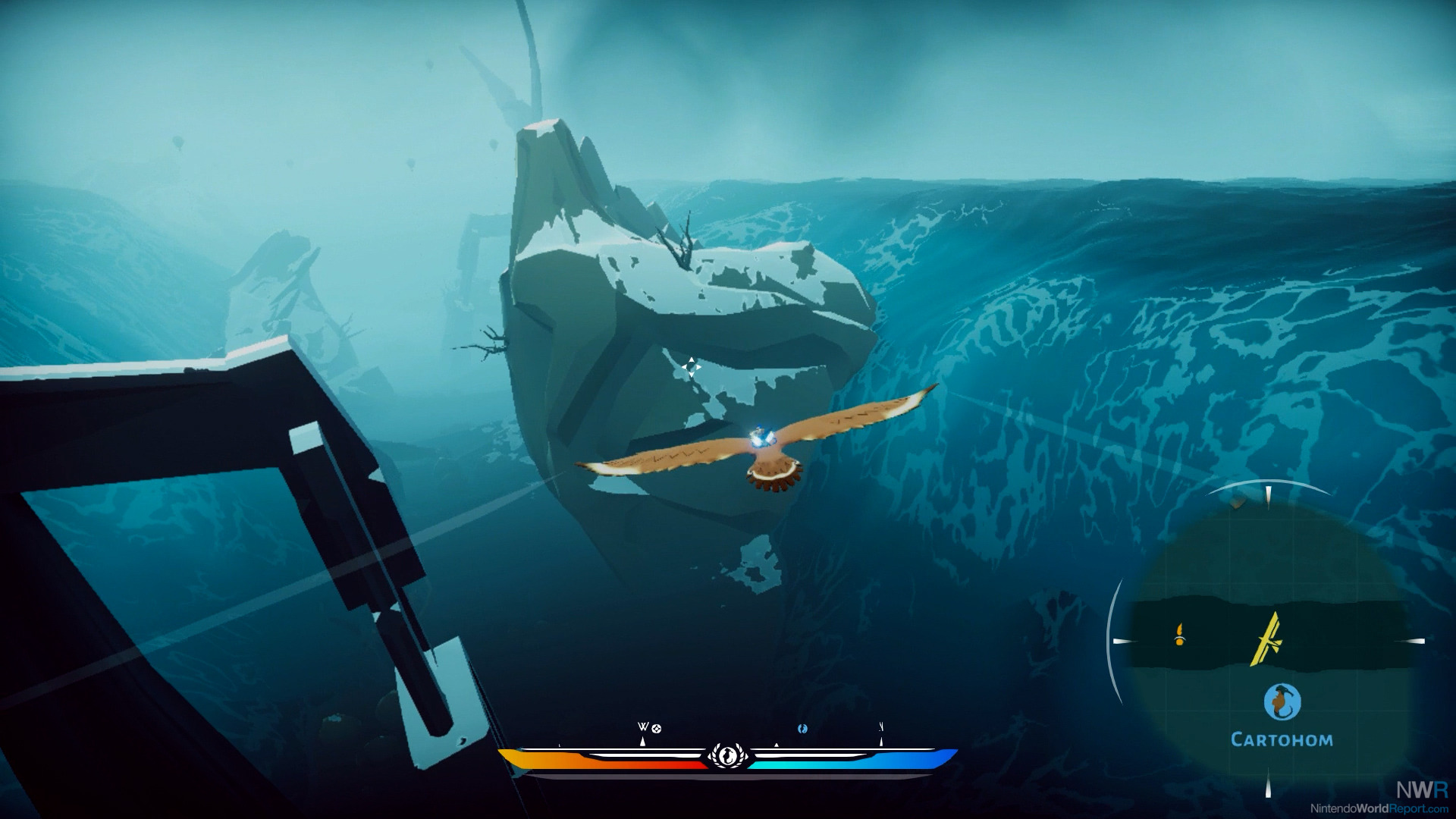 Though I already mentioned the visuals, I’d be remiss to not talk about the astonishingly impressive achievement of Wired Productions and Thomas Sala in getting the game to run so well on the Switch. John Rairdin actually went into detail about the corners that were cut to get the game running on the Switch in his graphical comparison video, which you can watch down below. Suffice it to say that I was floored seeing the game, an Xbox series X and S launch title no less, run at a fluid 60 frames per second in both docked and handheld mode. While its graphical style and gameplay definitely gives The Falconeer some leeway, with clouds and a relatively long render distance, the game still looks absolutely phenomenal on the Switch. The colors are vibrant and the dynamic weather makes the world feel lived in. There’s just a lot of visual variety on display and only rarely during combat did I notice the slightest of hiccups on the visual front. Playing The Falconeer in handheld mode feels like a revelation and really makes me question how so few games are unable to achieve 60fps in handheld mode. I do agree with John that the character models during gameplay look slightly off and static without the shadows and the specific lighting effects used on other platforms. Again, do yourself a favor and watch his video down below for an in-depth look at the graphics and how well the Switch port performs.

While I haven’t been able to put in as many hours as I’d like into The Falconeer just yet, I’ve certainly been enjoying the game so far. There’s a dynamic system at play that keeps every mission and way of traversing the map feel fun and unique. While I do think that the opening hours can be a bit disorientating with the worldbuilding and the general feel of the game, The Falconeer truly soars on the Nintendo Switch so far. There’s still plenty of time before the game releases in August, and we’re definitely going to take another in-depth look at the game in a few months, but so far the initial impressions are absolutely stellar. If you like games like Star Fox and other aerial combat games, The Falconeer should definitely be on your list for this year.