Roguelike fans may want to give Quest of Dungeons a look to help get in tune with the roots of the now-popular genre.

Though the Switch has many roguelikes, the game type that seems to be quite en vogue at the moment, before the arrival of Quest of Dungeons it had none that were close to the authentic root that the name refers to. Rogue is actually a very old game, whose graphics were originally only ASCII characters, where you’d move through a randomized dungeon seeking out adventure, loot, and monsters. While modern roguelikes will borrow pieces of this formula, usually permadeath, aspects of risk/reward, and perhaps random layouts, Quest of Dungeons is an attempt to provide an authentic experience but with an improved look and feel.

At the beginning of each quest you’ll have a choice of four character classes: A warrior, an assassin, a wizard, or a shaman. Each plays very differently so you’ll want to carefully consider your choice. Do you prefer to get up-close and personal, fire on enemies from afar, leverage ranged spells and keep an eye on your mana, or keep your options open by going down the middle? In addition, you’ll be able to choose your level of difficulty to help you either breeze through the experience or to get slapped around a bit. 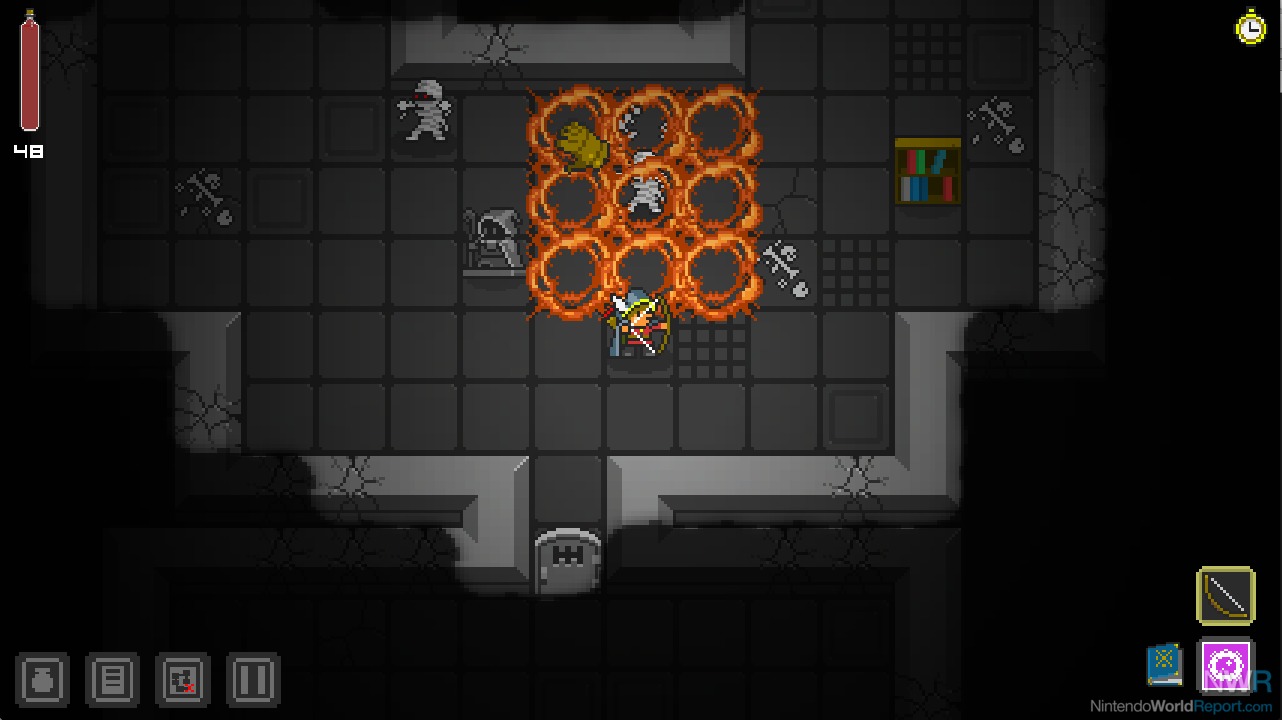 On each floor you’ll generally find a variety of rooms, monsters, and quests, always with a vendor and perhaps a few bosses thrown in as well. Combat is very basic, you’ll either run up to your enemy and fight them in a turn-based fashion (visually just generally bumping into them, not with elaborate JRPG-esque flourish) or you’ll target them and attack from afar. As you gain experience and loot you’ll find improved gear, collect tomes that will give you new skills or spells to make use of, and for some classes have opportunities to learn to wield other weapons which can provide better attacks.

For people looking for a light experience, something to play on the go or to passively play as you watch television, Quest of Dungeons could be a good choice. In general it isn’t very demanding or taxing to play but that also isn’t to imply that it’s easy. If you’re not paying careful attention to your health, especially when fighting bosses, you’ll quickly find yourself dead. At times scarcity of healing can be an issue so you may need to choose to evade your attackers or at least develop tactics to help ensure they can’t attack you en masse. It’s refreshing to see an example that very closely resembles the roots of this now very popular game type. Even if what is at the core of modern roguelikes is actually quite simple, the reason for its popularity is that the formula works.

This preview was based on the PC version of the title but the graphics and gameplay should be representative of the Switch experience.