Looking back on the ups and downs of Nintendo's WiiWare service, it is abundantly clear that the retro-styled Bit.Trip series is one of the major high points. Across six very different titles, indie developer Gaijin Games introduced a unique flavour of arcade gaming, fusing deceptively simple gameplay mechanics with a psychedelic flair for visuals and sound. And among them, most would agree that the fourth entry in the series, Bit.Trip Runner, stands above the rest. The gameplay truly applied the often touted philosophy of 'easy to learn, hard to master,' and its aural design was so well synced that you almost felt like you were creating it as you played. For this reason, it is hardly surprising that in the aftermath of the Bit.Trip saga Gaijin has returned to the runnin', jumpin', slidin' action for the amusingly titled Bit.Trip Presents Runner 2: Future Legend of Rhythm Alien. 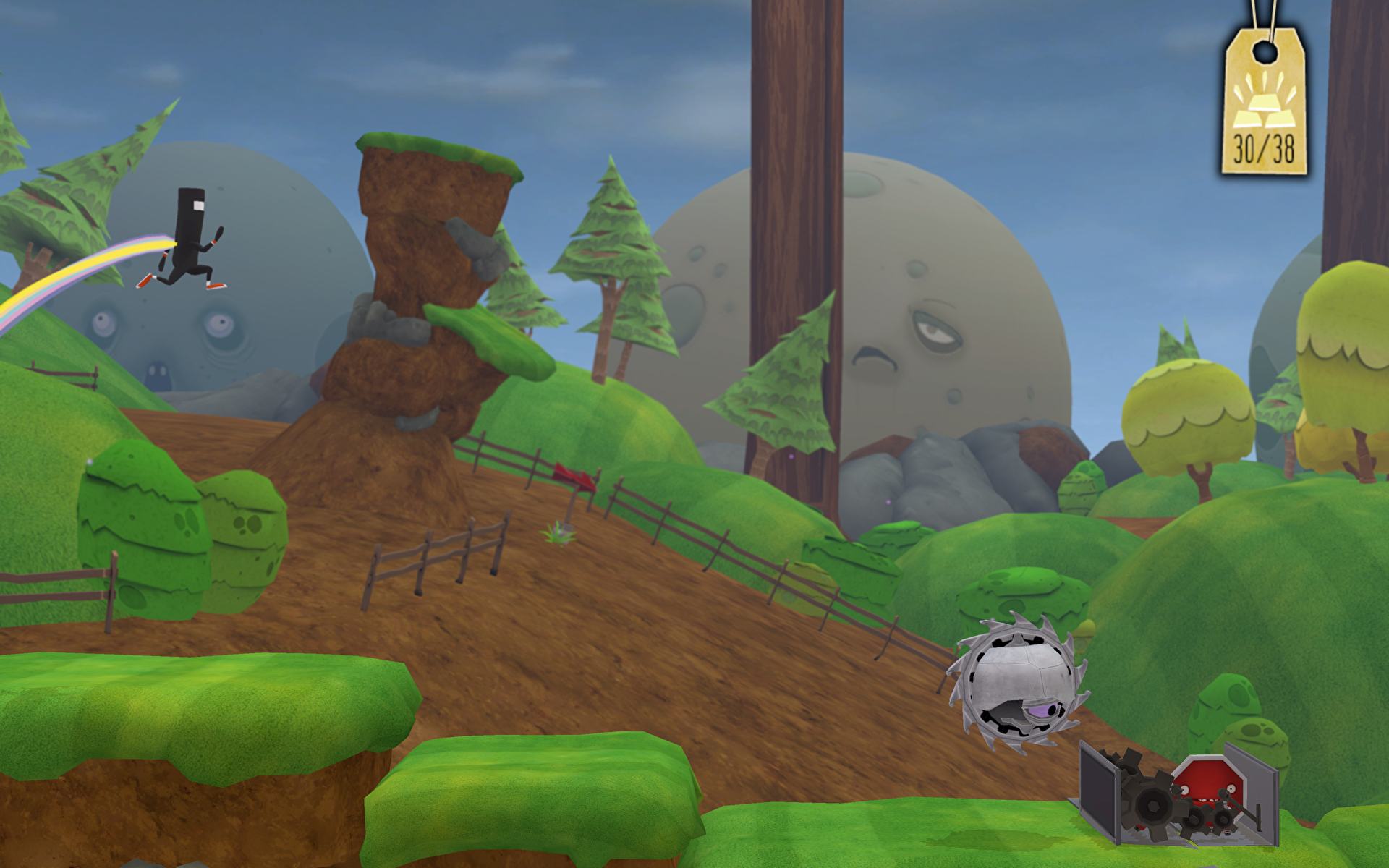 Commander Video is back, with his trademark rainbow trail in tow.

From the looks of things, the core fundamentals of the original are still in place for Runner 2. The mysterious protagonist of Bit.Trip, Commander Video, still runs automatically from left to right as the player inputs his moves in order to avoid or destroy everything that blocks his path. He can still collect presentation-altering power-ups, as well as gold bars for bonuses, and if the levels shown so far are any indication, the game will be just as fiendishly difficult and timing intensive as the first Runner.

Where Runner 2 obviously differentiates itself, at least at first blush, is in the huge graphical upgrade. The Commander and his surroundings are rendered in full polygonal 3D this time around, while the jump to HD provides an extra level of detail to the backgrounds. It's a significant shift from the distinctly old-school look of the Bit.Trip games, but early screenshots and videos seem to suggest that it will retain the same quirky charm, with abstract geometry and whimsical details dotted all over the place. 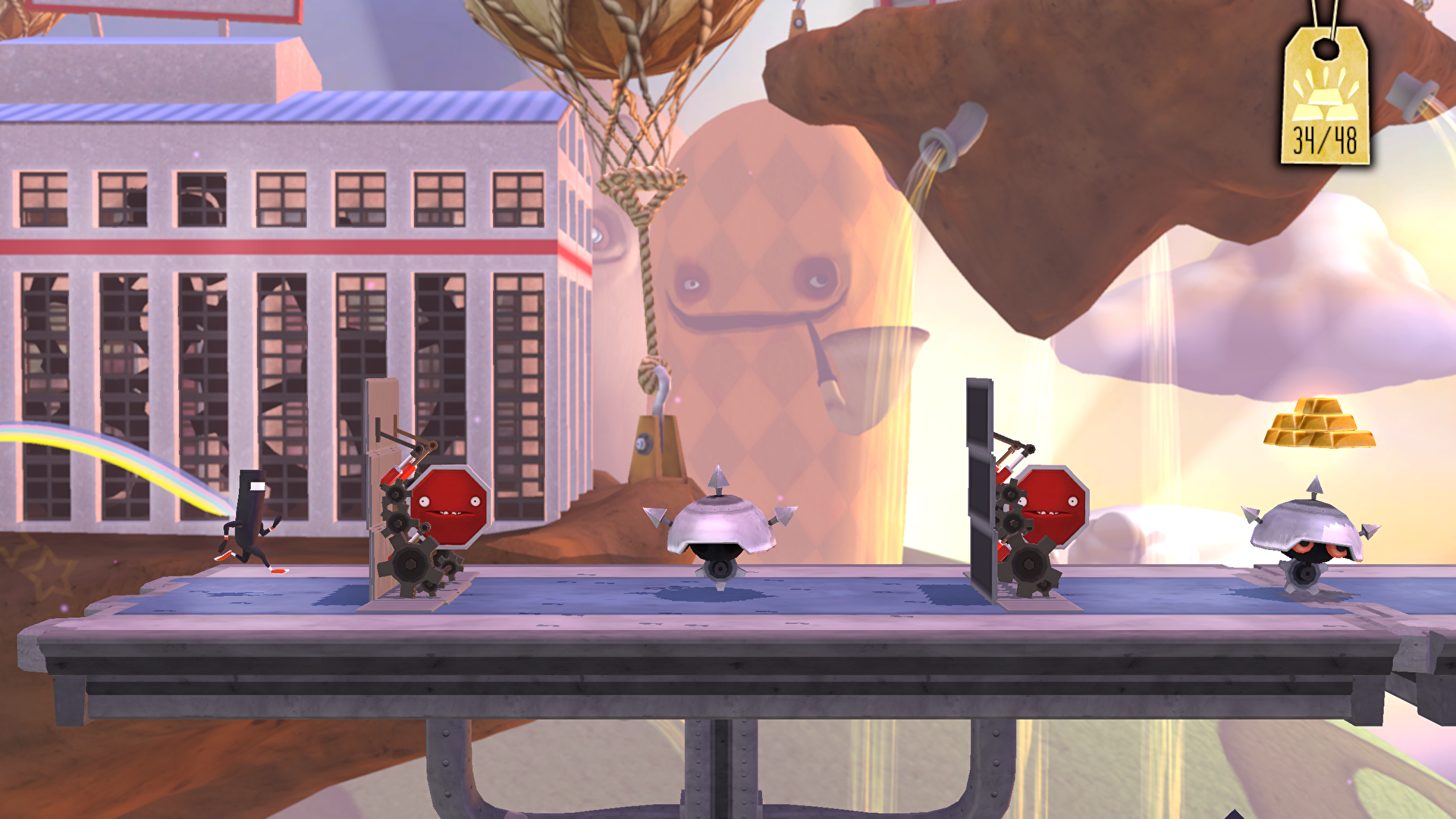 Nothing says newfangled HD graphics quite like a happy mountain smoking a pipe.

The game design appears to have been expanded as well. Commander Video keeps all of his abilities from Runner, but there are now additional obstacles to surmount, from loop-de-loops and speed boosts to giant fans and rails, which the Commander can move up and down while grinding. With the Runner gameplay being so focused around tight reflexes and pattern recognition, adding too many new elements risks giving too much to think about, but these mechanics seem to have smartly refrained from introducing a load of new control inputs and overcomplicating the experience. A different bonus system has also been implemented, so that completing a level with all gold bars collected will now result in Commander Video running into a cannon at the end. The player must time their button press to fire him as close to the center of a distant target as possible, so as to maximise the number of bonus points.

Furthermore, there will be more exploration in Runner 2, as the stages will sometimes split into multiple paths. Players will need to cover both the upper and lower routes in each level if they are to find all the collectibles, which include keys for unlocking secret levels, coins for unlocking costumes, and an assortment of extremely bizarre playable characters (a guy with a cheeseburger for a head, anyone?) The Wii U version of the game will also have some exclusive unlockables—finding special Famicom cartridges hidden in certain stages gives the player access to Retro Challenges. These are played on the Wii U GamePad screen and are themed after specific Famicom games. 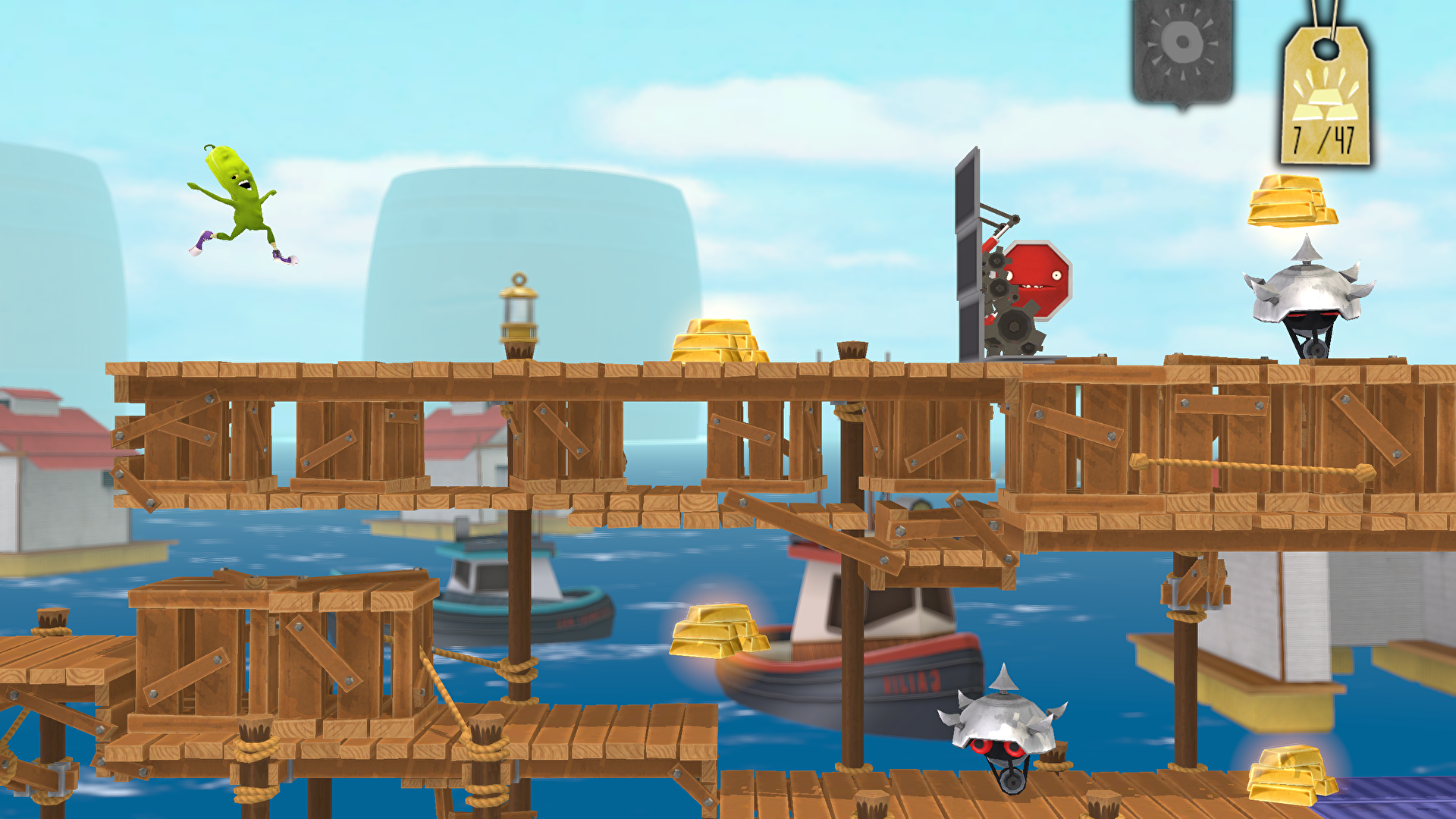 One of the many strange new characters, Unkle Dill, decides to take the high road.

The developers have promised a ton of content for Runner 2. Apparently, the game will have approximately three times the number of levels as the first Runner, with 100 stages, including boss encounters, spread across five differently themed worlds. This may sound a bit daunting, given the difficulty of its predecessor, which some people were unable to even finish. However, there are a couple of things that could make Runner 2 more accessible. Not only are there now selectable difficulty levels, but checkpoints have also been added, which should make the punishment for failing slightly less unforgiving. Purists need not fret though, because if one felt so inclined, they could jump over and forego the checkpoint to accept a challenge. Doing so will earn the player more points making for a potentially very interesting risk-reward trade-off.

Naturally, there can be no discussion of a Bit.Trip-related product without referring to the soundtrack. Gaijin has a history of bringing in guest composers to contribute music to games in the series, and Runner 2 is no different. For this title, the guest composer is Rich Vreeland a.k.a. Disasterpeace, a chiptune artist whose previous work includes, among others things, Shoot Many Robots, Nelson Tethers: Puzzle Agent, and most recently, FEZ. The music samples released thus far sound fitting for the game and, as with the original Runner, take a nice progression as the player moves through Commander Video's different modes, going from Hyper to Mega, Super, Ultra, and finally Extra. 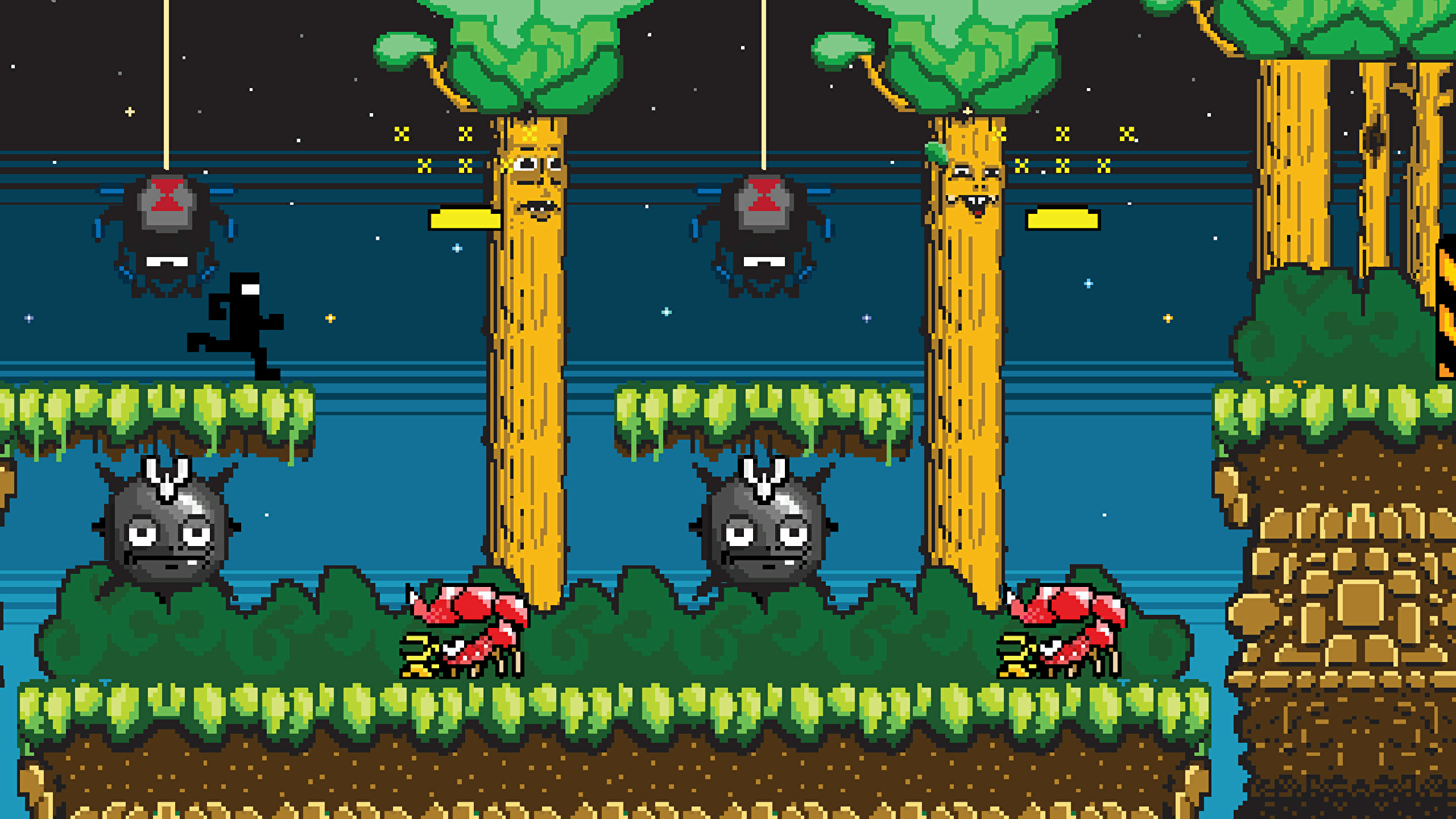 It has been more than a year since the Bit.Trip saga officially concluded, but Commander Video appears alive and well in his latest game where the goal is, once again, to run, run, and run some more. Bit.Trip Presents Runner 2: Future Legend of Rhythm Alien is currently expected to launch during the Wii U launch window.

Runner is right up there with Mega Man 9 and Lost Winds 2 as one of my favourite Wiiware games. It's not surprising, therefore, that this preview has really wet my appetite for more Bit.Trip.

Runner is definitely my favourite of the Bit.Trip series, but does anyone agree with me that Bit.Trip Core is a close second? I feel like many people disregard that game as being too simplistic, but I think that Core is the most rhythmic of the series and that it also has some of the best music tracks. Core is awesome!

I haven't played Core, but the thing that always put me off it was that, even just watching a gameplay trailer, I could not process what was happening. In one sense, it may be the most simplistic of the Bit.Trip games, but in another sense, you could probably argue that it's also the most difficult.

I haven't played Core, but the thing that always put me off it was that, even just watching a gameplay trailer, I could not process what was happening. In one sense, it may be the most simplistic of the Bit.Trip games, but in another sense, you could probably argue that it's also the most difficult.


Yeah, I can see that. Just looking at gameplay of that game probably makes it look like just a bunch of nonsense. If you just think of the red cross in the middle of the screen as being the D-Pad then you should get a clearer idea of what that game is. The d-pad controls the direction of the laser and the '2' button needs to be pressed in time with the music to shoot the incoming 'beats'. It's simple, but not simplisitic. They manage to add enough creases to the gameplay with interesting patterns and rhythms, and each level builds upon the ideas of the previous ones. Plus, the music is some of the best in the series.

I liked the music in Core, but I had an extremely difficult time keeping track of what was going on. It was a rubbing your tummy while patting your head type sensation that I didn't enjoy. Most of the rest of Bit Trip games I could tell I was bad at for specific skill reasons.

This is kind of similar to how I feel about RTS games. I just can't track what's happening well enough to even know why I'm bad at them.